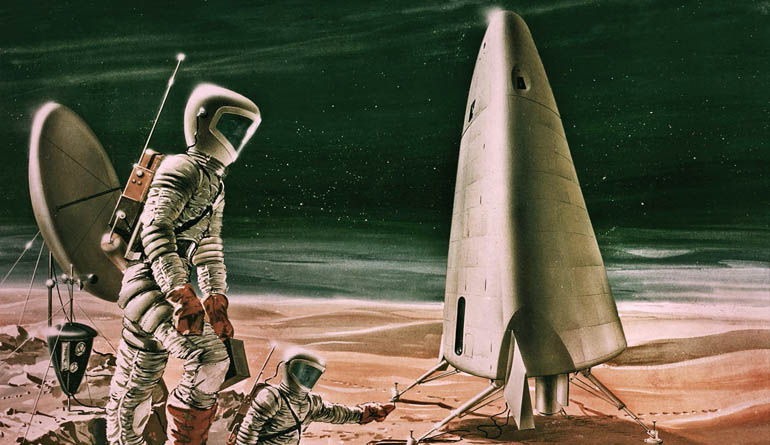 So, we’ll go no more a roving
so late into the night
though the heart be still as loving
and the moon be still as bright.

April 30th, 1950. Stars and planets speckle the Sunday night sky that hangs above the elm-lined streets of suburban Waukegan, Illinois, the hometown of author Ray Bradbury. A solitary resident on an after dinner stroll might breathe in the cool, blossom scented air, or admire the black silhouettes of lightning rods reaching up from the roofs of the modest neighborhood homes. With his naked eye, he’d be able to see Jupiter, Venus, and Saturn. Mars, though, would be the crown jewel. “Though it is drawing away from us and getting fainter,” an article in the local paper assures, “the planet Mars is still brighter than any other planet or star to be seen in the evening sky.”

Mars shines brightest in the imaginations of America’s youth, as well. The Monday edition of the Sandusky Register features an article in the Boys and Girls section that speculates on the build and demeanor of a Martian:

They’d be funny-looking people. Because air is scarce, they’d probably have to eat a lot of oxygen so they’d have big stomachs too, but not as large as moon people who would have to eat all their oxygen . . . they might appear to be unfriendly, but it’s simply because they have no time to have good manners.

The TV series Space Patrol debuts on ABC with an episode called “Treachery on Mars,” in which the sinister Martian Major Gorla, who is humanoid but decidedly un-American, hurls cosmic bombs at our hero Buzz Corry’s sleek, silver rocket ship.

On Thursday, May 4, 1950, Ray Bradbury’s The Martian Chronicles is published. The twenty-six stories in the collection weave a narrative of nostalgia and doom that spreads across the rust-red Martian landscape, where cringing anxiety mixes with slack-jawed wonder. Blue-eyed Space Men armed with a distinctly American certainty encounter Martians with “yellow coin eyes” and “soft musical voices.” These stories prompted the Argentinian writer Jorge Luis Borges to wonder, “what has this man from Illinois created…that his episodes of the conquest of another planet fill me with such terror and solitude?”

Bradbury’s creation launches from an Ohio field in January of 1999. “One minute it was Ohio Winter,” Bradbury writes, “…and then a long wave of warmth crossed the small town…Rocket summer…the rocket lay on the launching field, blowing out pink clouds of fire and oven heat.”

In the Ohio summer of 1950, moviegoers in the town of Hamilton are treated to a double feature of Mars Attacks the World and Rocket Ship. In the second feature, a crew of space travelers bound for the moon is beset by a series of gravitational mishaps that propel them toward Mars. Upon crash landing, they find a once-thriving civilization of Martians ravaged by atomic warfare.

A Russian man, arrested in Philadelphia for stowing himself away on an American steamship to escape a Soviet labor camp, reveals troubling information: Russia has built a “powerful rocket installation” in the Arctic aimed directly at Alaska. Meanwhile, in the Mojave Desert, American engineers conduct tests on “volunteer human guinea pigs” to measure the effects of rocket-powered acceleration and deceleration. The scientists also tackle the question of how best to drop bombs from “very high-speed aircraft.”

“There are 150 million of us,” the U.S. Census Bureau reports in July, a boom of more than 19 million since 1940. Bradbury envisions this growing horde of Earthlings darkening the Martian sky with their buzzing spaceships: “They came like locusts, swarming and settling in blooms of rosy smoke. And from the rockets ran men with hammers in their hands to beat the strange world into a shape that was familiar to the eye…”

In May of 1999, the 17-year cicadas emerge from Ohio fields and affix themselves in uncountable numbers to the spring greenery. Their collective mating call, an undulating swoosh and rattle and hiss, fills the spring air with the droning insistence of a jet engine. In the suburb of Hudson, the bagpipes of a prep school graduation procession compete with the insects, and the crunch of a thousand discarded cicada exoskeletons issuing up from the soles of dress shoes adds to the eerie cacophony. By late June, the cicadas have mated and died, their offspring falling from the trees to the ground, where they will burrow in and wait for 17 years, returning to the surface once again in May of 2016.

A recent printing of The Martian Chronicles advances the dates for Bradbury’s chapters by 30 years, placing the locust-like invasion of Mars in 2033, the same year that the cicadas will once again crawl up from the warming Ohio soil and emit their alien-like roar.
In the original edition of The Martian Chronicles, Bradbury imagines the final touches of colonization occurring in the spring and summer of 2005. Passengers from Earth pack their bags and board spaceships with hopes of finding a better life.

On May 19, 2005, NASA’s Mars rover Spirit pauses on its trundling path through the Gusev Crater to capture a Martian sunset. The image is sent like a postcard back to Earth: a pale dot sun pokes weakly through the dusty, purplish evening air. The Martian hills, brown-red in the twilight, form a jagged horizon. It is both familiar and impossibly distant.