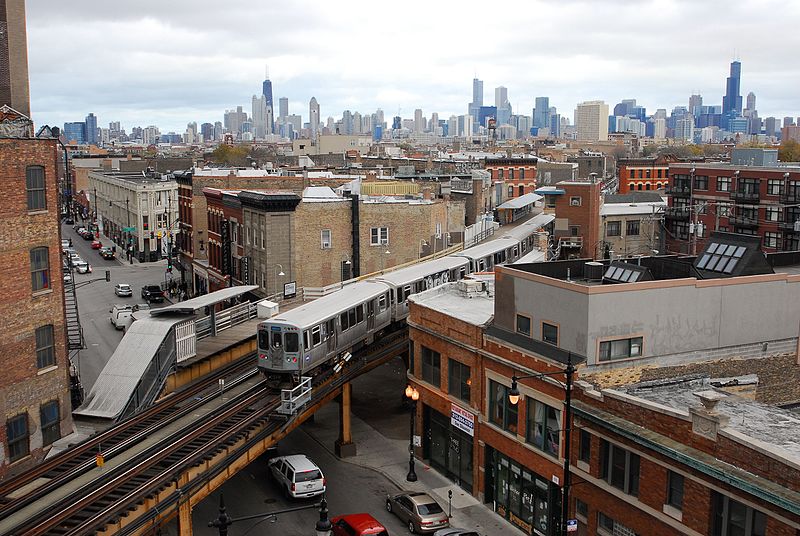 A woman must have money and a room of her own to write fiction.

Chicago, 1980. A young woman taps at a typewriter in the small kitchen—the only room with heat—of a rented apartment on North Paulina Street, square in the center of the Bucktown neighborhood. The young woman says the block “reeks of beer and urine, of sausage and beans,” and the apartment is a century old and in need of repairs, a fact that her father notes with a shake of the head every time he visits. Still, she is happy, because she sees herself as a writer, and she finally has a place of her own to work on her “little stories.”

Thirty-five years later, the neighborhood has changed. People with money have moved in and the area has become safer, trendier, and more expensive. The young writer’s one-time apartment has undergone a series of renovations, replacing the carpet with hardwood floors, updating the kitchen with brand new appliances, installing a central heating system.

The woman’s life has transformed, too. In January of 1984, Sandra Cisneros publishes her debut book of “little stories” with Arte Publico Press, a small publisher based at the University of Houston with the mission of “providing a national forum for Hispanic literature.” The House on Mango Street becomes a national best-seller, launching Cisneros’ literary career that will eventually earn her a National Medal for the Arts and cement her as one of Chicana literature’s most integral voices.

The House on Mango Street is a coming-of-age novel told in vignettes about Esperanza, an adolescent in Chicago, who navigates her teenage years and tries to balance her various identities: sister, daughter, student, worker, girl, woman, and artist. Cisneros set out to write the book that she “didn’t see in the library or the classroom,” the book that chronicled the female experience in the barrio and not the “bravado and pride” of the familiar male narrative.

As the young Cisneros works on establishing her own identity as a writer in the early 1980s, the Mexican-American community in the U.S. pushes for more recognition in the face of media and governmental marginalization. Two weeks before The House on Mango Street is published, a Rhodes Scholarship is awarded to a Mexican-American woman for the first time. Catherine Sandoval will go on to become the first Hispanic Commissioner of the California Public Utilities Commission. Also in 1983, Danny Santiago publishes a young adult novel, Famous All Over Town, which wins great acclaim for its portrayal of Chicano life in L.A. A year later, however, the book creates a controversy when Danny Santiago is revealed to be a pseudonym for Daniel Lewis James, an established white author.

The TV sitcom Condo premieres in February of 1983. The show depicts the conflicts that arise when a “WASP bigot” moves in next door to a Chicano family, and ABC promotes the show as “West Side Story coupled with All in the Family.” Condo is canceled after one season, and a year later ABC airs a.k.a. Pablo about a young Mexican-American comic who strives for mainstream success. The show is canceled after six episodes due to low ratings.

During a panel discussion at a literary conference in January of 1986, a group of Hispanic writers and publishers bemoan their lack of opportunities: “The publishing industry does not believe that we read, much less that we can write…there is no U.S. Hispanic writer of note who even has an agent,” says Nicolas Kanellos, founder of Arte Publico Press.

During this same discussion, Nicholasa Mohr, a Puerto-Rican-American author, explains how a publisher rejected her work because there wasn’t anything about “gang fights, drugs, and clashes with the police.” None of that had any relation to her life.

Esperanza, the teenage narrator of The House on Mango Street, reflects that “those who don’t know any better come into our neighborhood scared…They think we’re dangerous. They think we’ll attack them with shiny knives…Yeah. That’s how it goes and goes.”

After the success of her debut book, Sandra Cisneros is constantly asked about the autobiographical elements of the story. “I’m not Esperanza,” she says. “I’m the sum of all the stories that have passed through me, that I’ve heard, that I’ve witnessed. Esperanza becomes a composite of all of the above.”

Just prior to draping the National Medal of the Arts and Humanities on Sandra Cisneros’ shoulders on September 22, 2016, President Barack Obama expressed gratitude to her and the other recipients: “[I]t’s what so great about this country–that there is no single, set way to contribute. All of us belong. All of us have a story to tell. Even when you think your story is too different, too strange, too unique, there’s someone out there that’s been waiting their whole life to hear you tell your story, because it’s just like theirs. What a great gift all of you have given us.”