Home
»
Series
»
Big Picture, Small Picture: Context for Sherman Alexie’s “What You Pawn I Will Redeem” 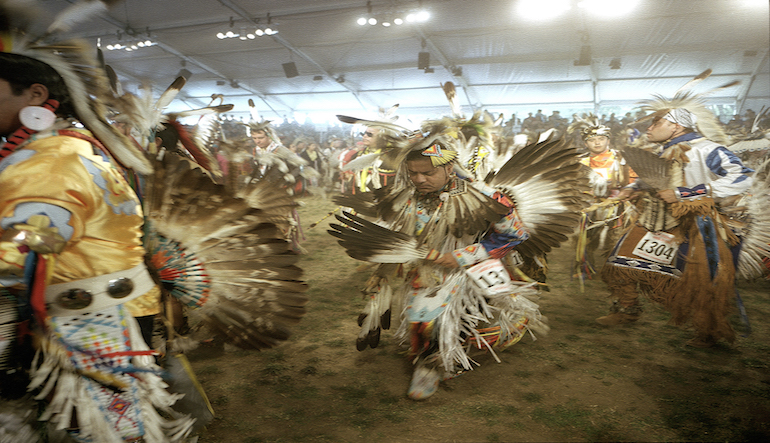 His people are many. They are like the grass that covers vast prairies. My people are few. They resemble the scattering trees of a storm-swept plain.

— From a speech attributed to Chief Seattle, 1854 (of dubious authenticity)

April, 2003. Tens of thousands of Native Americans from over seven hundred tribes convene at the New Mexico Arena in Albuquerque for the twentieth annual Gathering of the Tribes Powwow, the largest in North America. Over the course of the three-day event, dancers and singers don traditional regalia to celebrate the histories and cultures of their tribes, while artists sell and trade their goods.

Amid the bustling crowd, a blanket on the concourse floor gradually piles high with cash offerings to support the family of Private First Class Lori Ann Piestewa, member of the Hopi tribe, after her death in combat during the first month of the US-led invasion of Iraq. Piestewa is not only the first American servicewoman to die in the young war, she is also the first Native American woman to ever give her life in combat while serving in the US armed forces. But Piestewa is not the first in her family to enlist for her country: her father fought in Vietnam, and her grandfather served in World War II.

Meanwhile, anti-war sentiment spreads across the globe. In the United States, protests pop up in over one hundred fifty cities, including in Seattle, where author Sherman Alexie addresses a crowd of thousands: “The reason we’re going to war is we’re upset about all the treaties that Saddam Hussein has broken with the United States. Imagine that? We’re upset because someone broke their treaties?”

Alexie’s short story “What You Pawn I Will Redeem,” featured in his story collection Ten Little Indians, is first published in the New Yorker on April 21st. The story’s protagonist is Jackson Jackson, a member of the Spokane tribe and a homeless alcoholic, who tracks his twenty-four-hour mission to redeem his grandmother’s stolen powwow regalia from a Seattle pawn shop. “Jackson squared” comes into money, but loses it just as quickly, making his way from Pike Place Market to Pioneer Square while reminiscing about his grandmother, who served as a nurse in World War II, another war in which “brown people kill other brown people so white people will remain free.”

A century before World War II, the freedom of white America is indeed on the minds of the politicians in Washington, D.C. President Andrew Jackson signs the Indian Removal Act into law in May of 1830, evicting tribes from their ancestral lands and pushing them out west, and in 1845, John O’Sullivan defines the doctrine that will drive the nation’s future, claiming it is “our manifest destiny to overspread the continent allotted by Providence for the free development of our yearly multiplying millions.”

“I am living proof of the horrible damage that colonialism has done to us Skins,” Jackson Jackson says in Alexie’s story. “But I’m not going to let you know how scared I sometimes get of history and its ways. I’m a strong man, and I know that silence is the best method of dealing with white folks.”

As eastern tribes move west, so do white settlers, first appearing in the Pacific Northwest in the early 1850s. An article in a July 1858 edition of the New York Times chronicles the subsequent conflict between the newly allied tribes of the area and the US army, referred to as the Coeur d’Alene War, for its vast readership. The Coeur d’Alene, Spokane, and Palouse tribes are labeled as “hostile savages,” and the defense of their land is depicted as an unprovoked “insurrection.” But the Times reporter urges his readers not to distress: “Such things are . . . the incidents of empire, and the government has no choice except a vigorous and decisive campaign against the Spokane and their allies.”

As promised, a vigorous and decisive counterattack is launched against the over-matched Indigenous armies, leading to the signing of a peace treaty that allows for white settlers to spread out in the Pacific Northwest, forcing the dwindling populations of Native peoples out of their homes and into reservations.

“Homeless Indians are everywhere in Seattle,” Jackson Jackson explains. “We’re common and boring, and you walk right on by us, with maybe a look of anger or disgust or even sadness at the terrible fate of the noble savage.”

A study finds that on any given night in 2003, there are over eight thousand homeless people on the street and in shelters in Seattle’s King County. The same study estimates that among those eight thousand, around three hundred will be Native American. By the end of 2003, a reported thirteen homeless Native Americans die from exposure or violence.

But there is hope for redemption; an ad in the Seattle Times solicits volunteers to serve food to the homeless on Easter Sunday, and the Chief Seattle Club, a non-profit organization devoted to helping homeless American Indians, raises funds to open up a resource center near Pioneer Square.

Jackson Jackson succeeds in redeeming the regalia, and the “city stop[s]” as he dances with his grandmother in the intersection. Despite his personal struggles, and in the face of hundreds of years of systemic oppression of his people, Jackson Jackson’s greatest attribute is his resilience: “Do you know how many good men live in this world?” he asks. “Too many to count!”