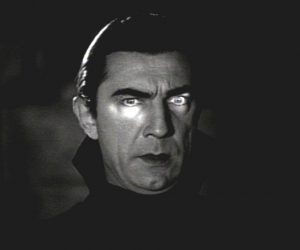 A penny dreadful circulates on the streets of London in 1847. The cover of Varney the Vampire; or, The Feast of Blood features a cloaked, leering skeleton reaching out for a slumbering dark-haired young maiden. They are in a graveyard, shrouded in a halo of fog. Devil-faced bats with tusk-like fangs flutter above them, and below is an empty tomb with a tagline written across it: “A Romance of Exciting Interest.”

330 miles west, across the Irish Sea, Bram Stoker is born in the north of Dublin. The boy battles various illnesses as a child, spending most of his time staring up at the ceiling from his bed, letting his mind wander to dark places. In 1897, at the age of fifty, he publishes his second and most famous novel, Dracula, at once establishing the canonical text in the vampire genre.

Fifty years later, and a hundred years after Stoker’s birth, the genre of horror comics is born with the arrival of Eerie Comics #1. The cover echoes Varney the Vampire: a cadaverous ghoul with glowing red eyes stalks toward a scantily clad damsel lying helpless on the ground. A dull yellow moon looms in the sky behind them.

That same year, Stephen Edwin King is born on a cold, dry September day in Portland, Maine. That night, a hundred miles south in Fenway Park, the Washington Senators shutout the Boston Red Sox, who are now 29 years into their World Series drought, dating back to the summer of 1918 when the franchise was “cursed” for selling Babe Ruth to the Yankees.

King spends his childhood following baseball and reading comics, especially the gory EC Comics series “Tales From the Crypt.” At the age of 10, King reads Stoker’s Dracula for the first time, and he is swept up in the heroes’ hunt for the cursed Count. Fourteen years later, at a high school in rural Maine, King teaches Dracula to his class of teenagers. One night after class, King wonders: what if Dracula came to the United States in the 1970s? And what if he settled in rural Maine, his wife, novelist Tabitha King, added. The young aspiring writer imagined that “Stoker’s aristocratic vampire might be combined with the fleshy leeches of EC comics, creating a pop-cult hybrid that was part nobility, part bloodthirsty dope.”

October 17, 1975. Salems Lot, King’s second novel after the successful Carrie, is published. The story chronicles what happens in the titular, fictional hamlet in Maine, when a centuries-old incubus named Kurt Barlow moves into a long-vacant mansion that the locals consider haunted. One by one, the residents of the town wake at night to a faint tapping on their window. Most answer the call, but a few heroes mount a resistance.

The week that Salem’s Lot is published, the Biddeford Daily Journal of Maine warns of a haunted house on an island off the coast of Portland. Rattles and moans emanate from the cellar at night, and sometimes a bloodsoaked man can be glimpsed standing silently on the steps. There is a treasure buried under the cellar, the locals believe, but it is cursed.

In the sports section of the same newspaper, a local writer wonders whether the “Green Monster” of Fenway park will be a character in a “horror story or happy ending” when the Cincinnati Reds visit the Boston Red Sox in the 6th game of the World Series that night. In one of the greatest baseball games ever played, the Sox outlast the Reds over 12 innings to win 7-6. The next night, however, the story twists for King and his fellow Red Sox faithfuls as the Reds win the deciding game of the series, 4-3; the curse of the Bambino rolls on.

Neil Sedaka’s “Bad Blood” is #1 on the charts that week, and if you walk into any disco, you might hear Hot Blood’s gothic groove, “Soul Dracula.” An art gallery in Manhattan shows an exhibit devoted entirely to Vlad the Impaler, and a new annotated Dracula hits bookstores. The book’s editor, Professor Leonard Wolf, believes that a “monster madness” is spreading across the nation, which he credits to the dissolution of the structure of organized religion. “Horror films,” Professor Wolf writes, “are the unacknowledged cathedrals of the American imagination.” Meanwhile, just outside of Los Angeles, the filming of King’s Carrie is underway. It is the first of what will be over 100 film or TV adaptations of King’s work.

In October of 2004, Salem’s Lot, a TV miniseries, is released on DVD. Along with Secret Window and Riding the Bullet, it is one of several King adaptations to premier this year. King’s proudest moment will come two weeks later, though, when the Red Sox win the World Series in a four-game sweep of the St. Louis Cardinals.

“Finally!” the front page of the Portland Press Herald reads the next day. The curse is lifted.