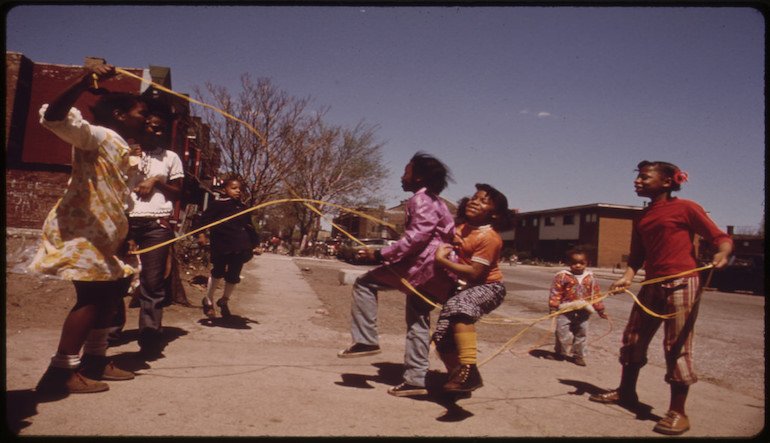 “They’ll see how beautiful I am
And be ashamed—

I, too, am America.”
—Langston Hughes

March 25, 1939. The Harlem Women’s Committee to Promote Anti-Discriminatory Legislation stages a protest at the Mimo Club on Seventh Avenue in New York City. Citing “deadly insidious discrimination,” the women of the Committee issue a statement decrying the “racial prejudice in employment, education, housing, and other fields.” Prominent members of the African American community gather and speak in support of the Committee, and those in attendance vow to send a “blizzard” of post-cards to the state capitol in Albany demanding change.

The New York Times article covering this rally is given the same amount of space as another article in that day’s edition: “Two Harlem Shops Held Up.” The paper reports that “three negroes, one of them armed,” robbed a mattress store five blocks south of the Harlem Women’s Committee rally. The suspects left with a total of $192.

That same day, also just blocks away in Harlem, a baby named Miltona Mirkin Cade is born. As a young girl in Harlem, she’ll go by Toni, frequenting the public library to get lost in the works of Zora Neale Hurston, Langston Hughes, and other artists of the Harlem Renaissance. Hughes himself will often visit the library, reading his poetry aloud to Cade and the other locals.

As a young woman, Cade takes an interest in writing, theater, and social work. At 19, she publishes her first short story, “Sweet Town,” in the magazine Vendome. Ten years later, after she learns of her ancestral roots from an inscription on her great-grandmother’s sketchbook, she changes her name to Toni Cade Bambara, in honor of the Bambara people from West Africa.

On September 28, 1972, Bambara publishes her first collection of short stories, Gorilla, My Love, chronicling the lives and perspectives of African American characters in both urban and rural settings. A New York Times reviewer praises the stories in the debut collection as “tough, violent, funny, and frantically relevant.”

Many of the narratives in Gorilla, My Love are told from the viewpoint of young women who navigate the challenges of identity and agency in their adolescence. The title story’s narrator, Hazel, blends bravado and glassy-eyed vulnerability as she tries to come to terms with her uncle’s engagement. In “Raymond’s Run,” a young girl balances looking after her developmentally disabled brother with preparing to defend her title in the neighborhood’s annual foot race.

Bambara’s stories, which she describes as “upbeat fiction,” do not shy away from the harsh truths in the lives of her disenfranchised characters, but they are shot through with optimism and elan: “As a cultural worker who belongs to an oppressed people,” Bambara tells an interviewer in 1982, “my job is to make revolution irresistible. One of the ways I attempt to do that is by celebrating those victories in the Black community. And I think the mere fact we’re still breathing is cause for celebration.”

In the short story “The Lesson,” Sylvia describes how a newcomer in her Harlem neighborhood, Miss Moore, tries in vain to “educate” Sylvia and her friends about the inherent inequality of the system. One day, Miss Moore takes the children to FAO Schwarz, the extravagant toy store in midtown Manhattan, where they feel awkward and out of place, simultaneously marveling and sneering at the sight of a $480 paperweight and a $1195 sailboat.

“Imagine for a minute what kind of society it is in which some people can spend on a toy what it would cost to feed a family of six or seven,” Miss Moore tells the children.

Sylvia interprets a lesson of her own from the experience: “ain’t nobody gonna beat me at nuthin.”

The week that Gorilla, My Love is published, FAO Schwarz is featured in the New York Times, boasting an array of high-end toys: robots, stuffed animals, and “for the youngster with everything, there is a model of a 1901 Oldsmobile for $2909.” Meanwhile, 300 parents from East Harlem march in front of the Board of Education headquarters in Brooklyn, protesting the deteriorating conditions of their children’s schools, where textbooks are hard to come by and students have to sit two to a seat.

In the decades following Gorilla, My Love, Bambara continues to write short stories, novels, nonfiction essays, and critical reviews. She pens screenplays and works to produce films that offer alternative perspectives to the dominant, well-worn narratives of Hollywood. She devotes her life to service, directing educational and support programs for populations in need.

In 1993, Bambara is diagnosed with colon cancer. On December 9, 1995, she dies in Philadelphia at the age of 56. In her obituary in the New York Times, the writer praises Bambara’s ability to express emotions and experience through clear, true, and joyful stories, harkening back to a review of her debut collection in 1972: “Toni Cade Bambara tells me more about being black through her quiet, proud, silly, tender, hip, acute, loving stories than any amount of literary polemicizing could hope to do. She writes about love: a love for one’s family, one’s friends, one’s race, one’s neighborhood, and it is the sort of love that comes with maturity and inner peace.”