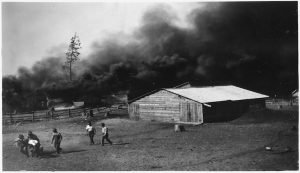 January 1939. Over a thousand recently evicted sharecroppers and their families, the majority of who are African American, settle along highways 60 and 61 in the Missouri Bootheel, forming a massive sit-down protest against the exploitative system of tenant farming. An FBI report on the demonstration later concludes that the displaced farmers “were protesting against the conditions in which they found themselves, which they described as ‘economic slavery.’” The state director of the National Emergency Council, however, sees no just cause for revolt, claiming that the protest is “fostered by subversive elements” who are simply waiting for “Uncle Sam to give them a white house with a porch, a barn, a well, and a span of mules.”

Enduring snowstorms, dwindling provisions, and police raids, the demonstration brings national attention to their plight, prompting heartfelt letters to the editor and mass fundraising efforts. “Cold and wet and forlorn,” an editorial piece in a Mississippi newspaper pleads, “These human castaways deserve whatever help the government and private agencies can give them.”

Still, the attention does little to improve the tenant farmers’ situation. Eviction rates skyrocket and in November of that year, a black sharecropper is kidnapped and beaten in Noxubee County, Mississippi. According to J.R. Butler, the president of the Southern Tenant Farmers Union, this was done to “discourage tenant farmers from taking part in the election of the county AAA [Agriculture Adjustment Administration] committee.”

The next month, Butler forecasts a grim future: “Plantation owners are using their AAA payments to purchase tractors and other new machinery, and while this may be desirable as a means of improving farming methods it is proving disastrous to sharecroppers and tenants who are already swelling the ranks of migratory labor throughout the South.”

Though the demonstrators in Missouri are mostly African Americans, US Census data from 1935 show that roughly 60 percent of tenant farmers in the “Cotton Belt” South are white, a staggering increase from the early Reconstruction years immediately following the Civil War (though admittedly a smaller portion of the white population works as tenant farmers than that of the African American population).

The same week that Butler makes his dire prediction, movie theaters across the country show different iterations of the American experience. Dorothy dreams of a land “somewhere over the rainbow,” Scarlett and Rhett make eyes at each other across a plantation house parlor in the ashes of the Old South, and two migrant workers named George and Lennie aspire to own a farm of their own one day.

That June, William Faulkner’s short story “Barn Burning” is published in Harper’s Magazine, marking the first appearance of the fictional Snopes family of Yoknapatawpha County, Mississippi. Thirty years after the Civil War, Abner Snopes, an embittered tenant farmer, moves his family from town to town in the New South, working the land until his incendiary pride compels him to lash out at the wealthy landowners who employ him. His young son, Colonel Sartoris, struggles between an innate sense of allegiance to his family and his own burgeoning moral code that recoils from his father’s destructive grasps for power. He dreams of an end to this inner conflict: “Maybe it will all add up and balance and vanish . . . the terror and grief, the being pulled two ways like between two teams of horses—gone, done with for ever and ever.”

Fire trucks wail through the midnight streets of Tarrytown, New York, in September of 1895, heading to the burning barn at John D. Rockefeller’s residence. Though the “Oil King” is the richest man in America, the one thing these lavish grounds do not have is a hydrant; the Tarrytown firemen stand helpless and watch the luminous flames eat up a small fortune in farming equipment, hay, and grain, while explosions boom out in the night. Sticks of dynamite and half-emptied cans of Standard Oil kerosene litter the woods near the barn, leading police to speculate that the blaze was an act of arson committed by disgruntled former laborers on the estate.

Eleven years after the publication of “Barn Burning,” William Faulkner accepts the Nobel Prize in Literature in a banquet hall in Stockholm, clad in a tuxedo and white bow tie. With his easy, rounded cadence from Oxford, Mississippi, Faulkner sighs out a rallying cry for the next generation of writers: “The young man or woman writing today has forgotten the problems of the human heart in conflict with itself which alone can make good writing because only that is worth writing about, worth the agony and the sweat. The poet’s voice need not merely be the record of man, it can be one of the props, the pillars to help him endure and prevail.”

In the closing scenes of “Barn Burning,” Sartoris Snopes endures and prevails, sloughing off the violent bitterness of his father for his own sense of justice: “He was a little stiff, but walking would cure that too as it would the cold, and soon there would be the sun. He went on down the hill, toward the dark woods within which the liquid silver voices of the birds called unceasing—the rapid and urgent beating of the urgent and quiring heart of the late spring night. He did not look back.”