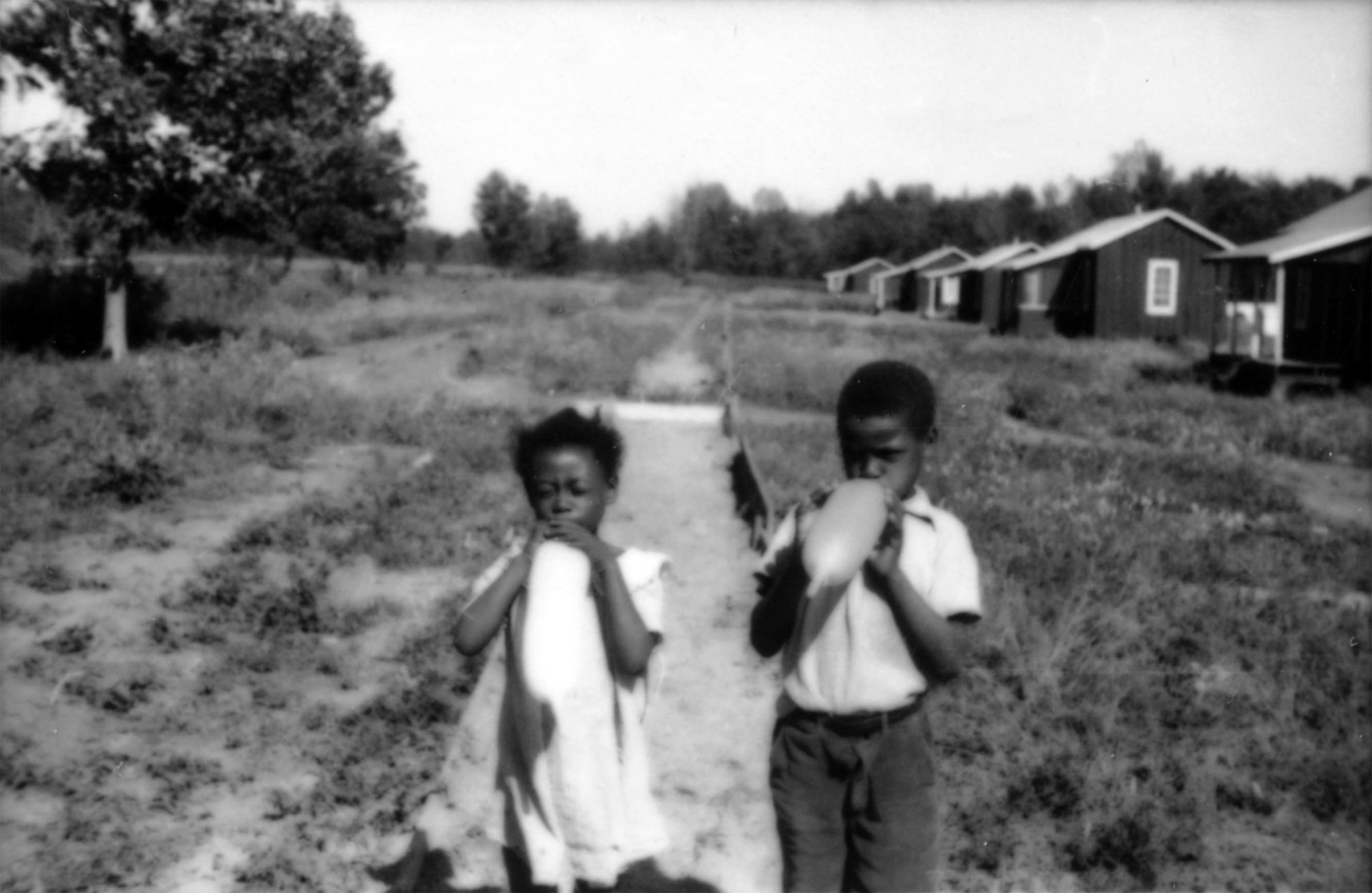 Last month, the New York Times published “City Summer, Country Summer,” a combined piece by writer Kiese Laymon and photographer Andre D. Wagner exploring Black boyhood across the country. Written in first-person plural, the piece presents itself as an exemplar or allegory, one southern country boy (referred to as “Mississippi”) and one city visitor (referred to as “New York”) that see in themselves and in each other archetypes for every Black child that ever found his echo in another. The two spend the summer running between their grandmothers’ houses, playing, causing mischief, and trying hard in that seemingly effortless way children do to reconcile their differences in culture, slang, and upbringing. When I first read it, Laymon’s piece read as a sweet bit of nostalgia, a comparison of what Black culture looks like in New York City to what it looks like in Mississippi, and an exploration of how children find a shared language no matter their differences. On second read, however, I saw that what united these two boys was more than their age or the color of their skin: it was profound fear.

Something in those central Mississippi woods reminded New York of the language of home. Being reminded of home, so far away from the bodegas, the apartments that scraped the clouds, the fire hydrants and actual blocks, terrified or satisfied New York. Whether it was absolute fear or exquisite satisfaction, wandering through the cool spots in those Mississippi woods was too much for New York’s body.

We didn’t speak this.

But our bodies knew.

That’s all the piece really says about the incident. But something beckoned me from between the lines. Expansive and rich, the garden—as I read it—holds a kind of magic, reminding New York not of his familiar present or past in the northeast, but of another past, dark and mysterious, that he had no idea was stored in his genetic memory. A repressed trauma kept hidden inside his body. A fear that the narrator knows all too well as he searches for his city friend all over the enormous open space, his mind jittering frantically with worry of what might have befallen New York—fears that center mostly around “white folks and white folks’ god.”

As children, the boys have no language for this dread, nor for their sense that though laws may have changed, the old world order has persisted, danger still imminent, their bodies still imperiled. They cannot say, “I’m afraid of the history that’s buried all over this place.” They cannot say, “I feel apart but I want to feel apiece.” They cannot ask, “Why do we not yet feel safe? Why does it seem like we never have been, never will be?”

They cannot speak of these things, so instead, when New York can no longer contain the horror, he surprises his country friend, hurling himself onto him and pushing him to the ground, and they tussle in the dirt of the garden, shrieking with a laughter too close to tears. They scuffle as a way of hugging. They kid as a way of confessing. They play as a way of confiding: “On the ground of that garden, covered in vegetables and dirt, coated in so much laughter, I want to say that the Mississippi and New York in our Black boy bodies were indistinguishable from each other,” Laymon writes. “That would be a lie. We absolutely contrasted. But the sight, tastes and smells of our contrasts felt like safeness. Not safety. Safeness. And safeness sounded like love.”

Like great writers, children don’t spoon-feed anybody their trauma. Children work through the pain in games, in roughhousing, and in laughter. They joke around when they want to cry, wrestle when they want to hug, and go off into the woods when they recognize something that frightens them. Their inner workings are contained just underneath the surface, just as haunted memories lie in wait like beasts beneath the surface of a Mississippi garden. And through these beasts, I believe what Laymon is trying to work through is this: to these boys, history, both lived and inherited, is both subconscious and unignorable, untold and unforgettable. To be a Black boy—which Mississippi already knows and New York is finding out—means never feeling safety, only safeness. It means generations on generations treading over the same grounds, the same atrocities, metamorphosed only into seemingly innocuous laws, discrimination, stereotypes, and dog-whistling. It means spending years searching for footing in quicksand only to look around and find that nothing has actually changed at all. It means learning to live with dread.

Dread is contained in colors and fragrances, in hunches and near-inaudible sounds, all of which are the turf of childhood. By using their language of touch and play, New York and Mississippi were able to feel, if for a single summer, safer, and less alone:

[W]hat we knew was more than short trailers and shotgun houses, more than magnolias and pines trees, more than semi-trucks filled with chickens headed to be slaughtered at the plant. We knew another way for Black boys in America to say I love you and I am afraid. And we kept saying I love you and I am afraid in as many different ways as we could that Saturday in the summer until it was time for New York to go home.