Home
»
Book Reviews
»
Nonfiction
»
Black is the Body: Stories from My Grandmother’s Time, My Mother’s Time, And Mine by Emily Bernard 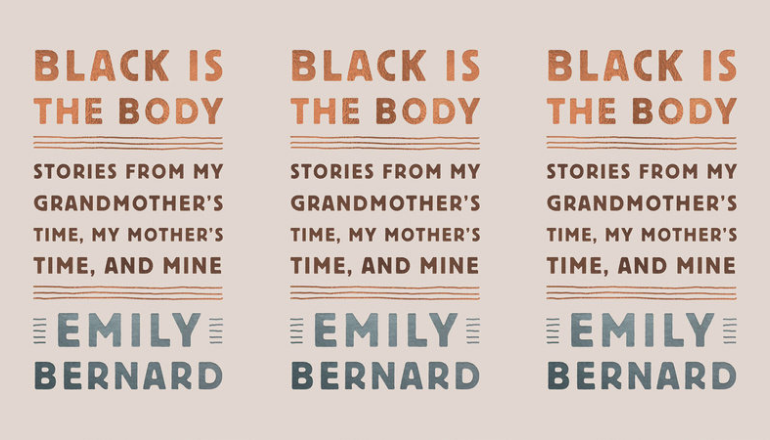 Black Is the Body: Stories from My Grandmother’s Time, My Mother’s Time, and Mine
Emily Bernard
Knopf (Penguin Random House) | January 29, 2019

In her new book, Emily Bernard writes she is “most interested in blackness at its borders, where it meets whiteness, in fear and hope, in anguish and love.” She examines this intersection closely, with her own life as a case study, to see where the pieces fit together neatly like a puzzle, and where their edges collide. The result is the collection of deeply personal essays in Black is the Body: Stories from My Grandmother’s Time, My Mother’s Time, and Mine.

Bernard’s experience informs her inquiry. She is an African American woman married to an Italian American man, a professor at the University of Vermont, and she is a resident of a predominantly white, rural state. Previously, she has written books about Carl Van Vechten, a white man who played a role in the Harlem Renaissance; edited a collection of essays about interracial friendships; and co-authored a photographic study of Michelle Obama. To this background she adds exquisite insight, understanding and compassion.

The essays follow a rough chronology, from her days as a graduate student at Yale to her life as professor, wife, mother, and friend. She flashes back to her childhood in Nashville, and to her mother’s and grandmother’s lives in Mississippi in the era of Jim Crow, picturing three generations of women who understood what it was to have brown skin in America.

In “Teaching the N-Word,” an essay previously published in American Scholar and Best American Essays, Bernard writes about one of her classes. Among the assigned readings is an article that uses the n-word in its title. The class discussion is lively and intense, but most of the students refuse to use the word. They try hard not to offend, but one boy uses the word with a swagger, almost adopting it as his own. Bernard pushes the class to reflect on why they veer away from normal academic discourse, where words can be used freely, without swagger, to discuss a scholarly article. At the same time, she ponders how best to teach the subject, a question complicated by the fact she is one of the few black professors her white students have ever seen. “I want to teach them things about race they will never forget,” she writes. To succeed, she must examine the prism from all sides, including her own refraction. What about her appearance, she wonders, establishes authority in the classroom? How much of her personal background should she reveal? Should she strip away the carefully constructed professional demeanor to confess how she felt when a white man used the n-word against her?

Every professor arrives at a balance of distance and intimacy to use in the classroom, but Bernard is unusually open about her choices. For instance, she tells the students the n-word causes her no particular pain, so they will not focus on her feelings, but to her readers she confesses this is a lie. With candor and humility, and language that is reflective, nuanced and almost lyrical at times, she invites us to join her and contemplate what we would do if we were in her shoes.

In “Black is the Body,” the title essay of the book, Bernard writes about an additional complexity her daughters have to parse. The girls, twins, were born in Ethiopia. Bernard and her husband trekked into the desert to meet their biological family, and traveled back to Vermont with the infants. As they grow, Bernard shows them pictures of Ethiopia and reads to them about the country’s saints and aristocrats. The girls come to think of themselves as brown skinned Africans who live in America.

When they are six, they see a television spot during Black History Month. One girl turns to the other and informs her they are black. “No, we’re brown,” her sister protests. “Yeah, but they call it black,” the first one replies. She has intuited that blackness is a social category, and that consequences will attach. Bernard knew this moment would come, yet she had hoped to prolong their innocence, before they would have to speak the American language of race. Later, she tells her husband’s cousin about her daughters’ new consciousness. The woman asks why she does not want her girls to know their history, by which she means slavery, segregation, and the civil rights movement. These are American stories, Bernard says. They belong to white Americans more than they belong to brown skinned girls from Ethiopia.

As the girls become adults in the US, Bernard will undoubtedly guide them, as she guides us, with incidents from her own life. In one, she runs into a friend at the grocery store. The woman, white, tells Bernard that her godson, black, is staying with her. She also says that after a bath, he left behind a dark ring in the tub. Too late, the woman realizes the absurdity of what she just said and Bernard, stunned, can only stammer: “Maybe he was just dirty.” They part quickly and take care to avoid each other as they finish shopping. Later, Bernard tells another friend about the encounter and that friend is indignant. Later still, Bernard mulls over her reaction and concludes that, however her friend mangled the comment, what she is offering the boy is love. “Maybe that is all anyone ever has to offer.” It’s a ray of hope, Bernard’s and ours, at the border of black and white.

Tags:Black Is the Body, Emily Bernard