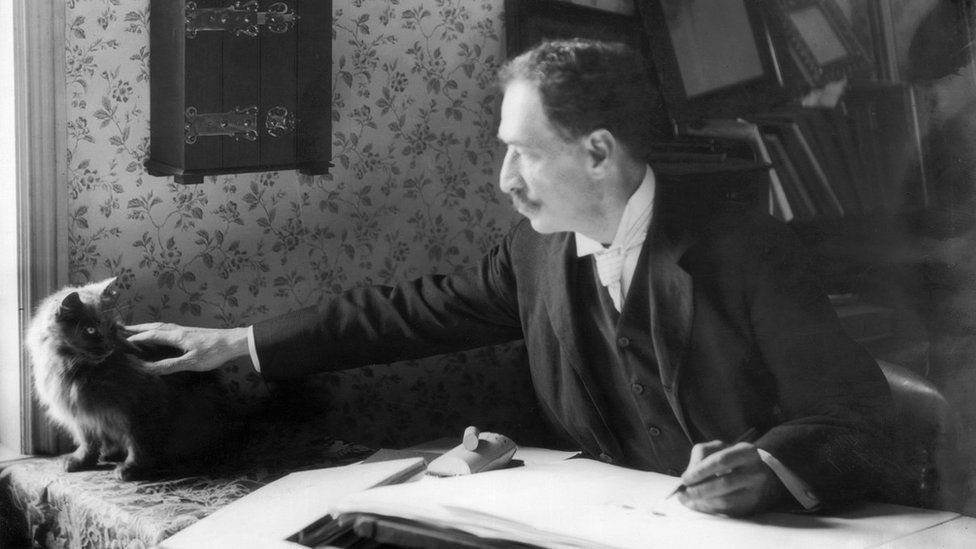 Elena Passarello’s 2017 essay collection, Animals Strike Curious Poses, is not only a celebration of famous animals throughout history but also of the many forms an essay can take. Organized by their subjects’ position in history, beginning with the glacier-bound juvenile mammoth Yuka and ending with Cecil, a lion killed by a trophy hunter in 2015, the essays describe, report, conjecture, and imagine with a measure of humor and no shortage of heartbreak. After all, another element that binds together these essays is that all of their subjects are dead. But the essays come together to celebrate, too, and for this reason, “Jeoffry” deserves particular attention.

Of all the essays in the collection, “Jeoffry” embraces mystery most, and it does so both in form and content. Rather than utilize her exacting and energetic prose in the confines of the paragraph, and rather than situating or excavating the subject part of the essay’s overt project, Passarello instead chooses to inhabit the source itself. That source is Jubilate Agno by the eighteenth century English poet Christopher Smart. Smart, who was a promising poet even in his youth, having received a fellowship from Pembroke and encouragement from the likes of Alexander Pope, was intimately connected to the vibrant, boisterous community of arts and letters in the mid-century. Samuel Johnson and Frances Burney considered him a friend; the famous actor David Garrick orchestrated a benefit performance in Smart’s honor. The reason for such a benefit is likely the most well-known fact about Smart: he was confined in a hospital due to mental illness for roughly six years. During his confinement, he was permitted to keep a cat—Jeoffry—and an ode to Jeoffry appears in Jubilate Agno, which itself is a beguiling, often opaque combination of diaristic record, scholarship, and personal book of worship, rife with layers of allusion and reference and populated with passages erudite, familiar, and cryptic in varying degrees.

Though Smart’s literary career continued—largely unsuccessfully—after his release, Jubilate Agno was not published until 1939; this essay references W. H. Bond’s 1954 edition. The surviving manuscript from which the published editions are derived is fragmented; the Jeoffry passage comes as the final part of Fragment B2. Fragment B2 comprises 770 various and enigmatic lines that include two abecedarian passages, invocations of many plants and animals, and countless references to biblical figures and Smart’s acquaintances, all rendered with stirring and pithy specificity that simultaneously and paradoxically defy a reader’s attempts to yoke them into firm coherence.

The seventy-four lines of “My Cat Jeoffry” are much-anthologized, often serving as a point of reprieve on English literature syllabi. Taken simply on its surface, the passage is a joyful celebration of a beloved pet, so delightful in Smart’s eyes that Jeoffry himself becomes proof of God’s wonder and mystery. Read within Smart’s autobiographical context and in our own, as we enter the third year of a global pandemic marked by confinements of varying kinds, “My Cat Jeoffry” has its own logic and appeal: many of us have taken comfort in animal companions throughout periods of isolation, illness, and depression, buoyed by their antics and cheered by the sense that at least this being loves us. The unity and coherence of the Jeoffry section, too—a unity and coherence palpable to a contemporary reader who is not, for example, a biblical scholar—makes it an inviting way to encounter Smart’s antiphonal and anaphora-dependent structure. In “My Cat Jeoffry” and the rest of Fragment B2, each line in the passage begins with “For.” Other passages of Jubilate Agno begin with “Let,” and in the less-fragmented portions of Smart’s manuscript, “Let” and “For” sections are carefully counterpointed, such that they can be imagined as a kind of call and response.

Elena Passarello takes up this call and response in literal fashion, using the physical space of the page to replicate it. In “Jeoffry,” the entirety of Smart’s Jeoffry lines are printed on the right-hand pages of the book; Passarello begins her work on the left-hand pages, providing only one direct exemplar from Smart as key to the work: a pair of lines from Fragment B1 that are, in Smart’s manuscript, set up to be read across the spread of pages:

‘Let Shephatiah rejoice with the little Owl, which is the wingged [sic] Cat.’
‘For I am possessed of a cat, surpassing in beauty, from whom I take occasion to bless Almighty God.’

From this model, Passarello’s starting point is a celebration of cats across culture, bringing together Lomasa, Bastet, Pangur Ban, Samuel Johnson’s cat Hodge, and a rollcall of the wilderness—lynx, panther, jaguar, and so on—as she creates the “Let” lines to accompany Smart’s “For.” The effect is charming, to be sure, but it is also in clear conversation with the rest of Jubilate Agno, in which Smart frequently tumbles through lists of animals, invoking everything from elk to sea-urchins. Most immediately, the seamlessness of Passarello’s adoption of Smart’s style impresses. In homage to Smart’s abecedarians, Passarello offers an acrostic made of Jeoffry’s name, full of fancy, which ends with: “Let Y be YES; two short roads to a line, which is why, Jeoffry? And then yes, Jeoffry.” In contrast to all the blessings and praise of Smart’s work, she offers condemnation to the cat-haters: “Let HOGARTH’s wanton boys, who string up tails, meet the sticks.” The pleasure of encountering the period-accurate contracting of phrasing, too, furthers the illusion: “Let the two fragments—godly and Smartly—rejoin with a Cat’i’th’gap!”

All of this is to say that the interplay between Smart’s and Passarello’s lines is playful, subtle, and illuminating by turns, which is no mean feat given the troubled mystery of Smart’s mind. But however clever Passarello’s work in figurative imitation is, her essay rises to a marvelously affecting note as it turns from the wry to the empathetic: “Let cat-particulars keep odd time and vociferate all hours,” she writes, with knowing understanding of cat behavior, then follows with, “Let cat-thoughts keep a human body sweetly outside itself. / Let cattery soothe the kept man, be he a-bed, at-desk, or exiled.” Here is the overt comfort of the animal companion: the distraction, the company. Let cattery—or the pleasures of the text devoted to such—soothe any of us in need.

The voice of certain statements also brushes close to the consciousness of Jeoffry, third-person (third-cat) passages that strike a plaintive, compassionate note; here is the cat who cannot speak and cannot unravel a man’s madness, but who attends all the same: “Let the kept Man-at-desk go a-catting to squelch the roll and the prank of his mind.” Smart, viewed through Jeoffry’s eyes, is also worthy of blessing for his affection and companionship: “Let God bless the SMART who sends a J-waggle down the hump!” The same Christopher Smart, who, it seems, even on his best days, could be a difficult friend to have—constantly out-spending his means, reckless in the face of consequences, impulsive, particular, and later prone to abrupt, boisterous, public outpourings of religious fervor—is here adored.

The ultimate effect in reading “Jeoffry” is its sense of conversation, the way it both sees and hears the text to which it responds. Christopher Smart is dead, and Jeoffry, too, but “Jeoffry” speaks not only to its source but with it, in the antiphonal style that Smart specifically pursued. The project of Jubilate Agno is continued, not stifled. In light of Smart’s distress and isolation, this conversation becomes an act of humanity that transforms as the text progresses. Passarello’s first cataloguing lines immerse a reader in the project and the language, but it is not long before an awareness arrives: “Let Jeoffry rebuff any traffic with a suspect stripe. / Let his man not be called mad, though he shows his Tiger teeth.” With that awareness comes the clear defense. Smart perhaps alludes to his defender, though in a way that celebrates the essential nature of cats far more than it seems self-referential: the cat “keeps the Lord’s watch in the night” and “counteracts the powers of darkness” through the traits of the nocturnal creature (and the startling light of static electricity, to which Smart refers multiple times).

One could imagine a version of “Jeoffry” that doesn’t look so carefully. Perhaps one reason the “My Cat Jeoffry” section of Smart’s work is excerpted so often is that it is perfectly coherent to a contemporary reader, a kind of eighteenth century cat video in which Jeoffry’s “spraggle upon waggle” is easily conjured. Even with the image of Smart and Jeoffry confined alone together lingering in the back of the mind, Smart’s troubles seem put by in those lines, no matter how present they are elsewhere. Reading “My Cat Jeoffry” as a standalone, however, one misses that a mere four lines before Smart first mentions Jeoffry—his cat “surpassing in beauty” in Fragment B1—he writes, “For they pass by me in their tour, and the good Samaritan is not yet come.” As W. H. Bond notes, at the time of Smart’s confinement, asylum patients could be viewed by members of the public. His troubles, and others’, were made a spectacle. In “Jeoffry,” those troubles are on view, also, but the lens is, undeniably, a loving one, as the final lines attest: “Let a Cat to a drowning man be love. / Let love be his keep.” The ultimate effect of Passarello’s work is an empathetic duet that reaches both forward and back with gentle humor and sparking wit, a perfect companion against the dark.