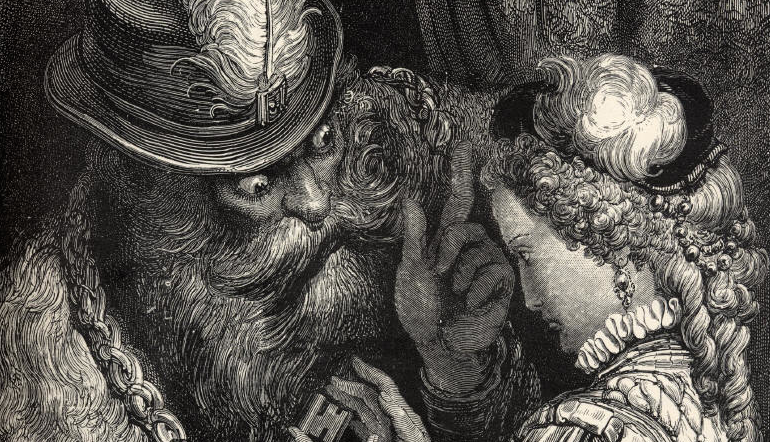 When stories transport me, they usually do it inside a character’s body, and the farther afield the story is taking me, the more important the physical details of the characters’ experiences become. The bodily responses of characters to their situations make those situations feel personally real, stop me from feeling like I’m reading about other people’s experiences, and make me instead feel like I’m living through those experiences myself. The visceral repercussions—inside characters’ skins—of a story’s events function like a proof. This is true. Believe this. It’s hard to read good writing about a physical sensation without feeling some echo of it ourselves, and once we’ve done that, we’re inside the story.

One of the most richly physical pieces of fiction I know is Angela Carter’s “The Bloody Chamber”—which retells the Bluebeard story, turning it into an experience we live through intimately with the narrator. She’s a young, poor music student, and she has just married a much older and incredibly wealthy man whose three previous wives all died in vague and tragic circumstances; the story begins as he brings her to his castle by the sea. The place alone would be enough to show us we’ve come with our narrator to a point of ominous transition, because the castle itself, in Carter’s descriptions, becomes a kind of darkly pregnant body. Its seascape setting is a place of “amniotic salinity”; the castle itself is “at home neither on the land nor on the water, a mysterious, amphibious place.” When, inevitably, the narrator’s new husband leaves her alone with his ring of keys, only one of which she may not use, and when, inevitably, she sets out down the forbidden corridor to use it, the castle itself seems to be conspiring to devour her in order to feed its own menacingly fertile life—as it has already devoured others:

I put a match to my little taper and advanced with it in my hand, like a penitent, along the corridor hung with heavy, I think Venetian, tapestries. The flame picked out, here, the head of a man, there, the rich breast of a woman spilling through a rent in her dress—the Rape of the Sabines, perhaps? The naked swords and immolated horses suggested some grisly mythological subject. The corridor wound downwards; there was an almost imperceptible ramp to the thickly carpeted floor. . . . A long, a winding corridor, as if I were in the viscera of the castle . . .

As she moves downward into the castle’s innermost organs—as she comes to the room where she will learn about her husband’s darkest predilections—the castle itself is warning her, with those tapestries of bodies spied in pieces, of the costs of advancing. Of how she will be made to pay with her own body for the knowledge she cannot resist seeking, of how that has been her husband’s plan all along.

That husband himself is a repulsively vivid presence on the page. Carter spares no sense in making him real to us, and as a result the story takes on a claustrophobic feel—we want to be much farther away from him than we are allowed to be. The narrator tells us that he seems to her like “A lily. Possessed of that strange, ominous calm of a sentient vegetable, like one of those cobra-headed, funereal lilies whose white sheaths are curled out of flesh as thick and tensely yielding to the touch as vellum.” His smell is of “Russian leather”; his skin has a “toad-like, clammy hint of moisture.” He has piled the marital bedroom with the lilies that are so like him—also, it will turn out, the room in which he stores the bodies of his previous wives. His own flesh is as inescapable in the story as the horror of what he’s done to theirs.

That horror too is made viscerally real—each wife is given her own gruesome spotlight inside the forbidden room, once the narrator unlocks and enters it. But what’s maybe even more frightening than those descriptions is the way we watch as our narrator’s own body is reshaped and reframed for the part the husband wants it to play in that room. He begins this work before they’re even married, taking her to the opera in an ensemble he provides, a white dress and a necklace that’s a family heirloom: “A choker of rubies, two inches wide, like an extraordinarily precious slit throat.” Later, at the castle, he has her wear that necklace again for their marriage’s consummation. When he gives her his keys and tells her there’s only one she may not use, he knows just what he’s doing, just what she will do—he has already planned out the spectacle of her death, its method, its effect on himself (when he tells her, upon discovering her transgression, that she will die by decapitation, neither she nor we are surprised). The necklace has been practice. And our narrator, with her history as a piano student, is good at practicing. For a brief time before she discovers the contents of the forbidden room, her husband’s view of her body actually does begin to recast her own view of it:

. . . I was afraid, not so much of him, of his monstrous presence, heavy as if he had been gifted at birth with more specific gravity than the rest of us, the presence that, even when I thought myself most in love with him, always subtly oppressed me. . . . No, I was not afraid of him; but of myself. I seemed reborn in his unreflective eyes, reborn in unfamiliar shapes.

It’s this, I think, that’s in some ways this husband’s most profound violence in this story. He doesn’t just kill his wives; he turns them into objects of his own sadistic vision. His murders are assertions that he knows truer shapes for their selves than they do.

This is a temporary belief, in our narrator’s case. She will get to remain her real self; the ending of the story shows us her triumphant reclaiming of power. What I love about this story is how completely we’re made to inhabit each of these stages: the marriage, the threat of violence, the eventual vanquishing of that threat. The fairy tale is proved on our skins. As a result, I think, the story ends up feeling like one that perhaps already happened, or perhaps is happening, or perhaps will happen—ageless in its capacity for repetition. A pattern, in other words. One that does not quite seem safely over when the story is.