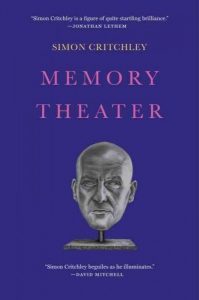 What I remember most from reading Thomas Harris’ Hannibal when it was first published in 1999 was not the graphic violence and strange character detour for which the book would be criticized; it was the concept of the Memory Palace, an internal museum of collected artifacts tied to various events that resided inside the twisted, brilliant mind of Hannibal Lecter. In the credits, Harris attributes his construction of the memory palace to inspiration from Frances A. Yates’ The Art of Memory. Fascinating as the device is, Harris presents a mere Cliffnotes version of the historical and philosophical relevance of memory palaces or theaters (both terms seem relevant, depending on the writer). Fiction readers wishing to delve into the concept on a more profound level would do better to venture in Simon Critchley’s recently released Memory Theater (Other Press).

Yates’ 1966 historical study of mnemonic devices from the Classic period to the 17th century is the point of departure for Critchley’s narrative, a vaguely articulated tale of a dying philosopher willed the notes of his beloved mentor, Michel Haar, which expand upon The Art of Memory. Beyond the physical constructs of static memory theaters, detailed extensively in one of the novella’s many lecture chapters, Haar’s supposedly revelatory essay ties Yates to Georg Wilhelm Friedrich Hegel’s 1807 The Phenomenology of Spirit, a philosophical work that explores three metaphysical stages of the Spirit. Upon reading the essay, the narrator muses in wonder:

Through the art of memory, we learn to see ourselves from the perspective of the whole, from the standpoint of totality. In so doing, we become infinite, divinely human.

But the past is not the only element of Haar’s canon—the future somehow resides in his mysterious boxes. It is this predictive mysticism that captures the book’s narrator, driving him into a self-aware madness as he attempts to construct a theater of his shattered past. What happens from there for the remainder of the brief book, is somewhat irrelevant.

In fact, the majority of the plot is irrelevant. Memory Theater is not a work constructed for those yearning for a strong narrative—it is more an intellectual sojourn masquerading as fiction. Other reviews have equated the narrator to a semi-autobiographical sketch of Critchley himself. Given their similarities (including the narrator’s claim of many of Critchley’s works as his own), that is not a stretch, but it might also speak to the detachment the narrator displays toward anything beyond his forays into philosophical discourse. Left with prudently sketched details, readers must define for themselves who is behind the narratorial facade.

On the whole, who the character is and what happens is of secondary consequence to the bigger philosophical questions of memory, time, sanity, destiny, and perception. Critchley’s writing is best when he drolly plays within his native academic field; his style is hard to pinpoint beyond that as it vacillates between minimalism, discourse, and the occasional cliche. As the narrator realizes late in the book, “We do not make ourselves. We cannot remake ourselves through memory.” From that perspective, Critchley does not remake fiction so much as use it as a new format for questions philosophers have grappled with since antiquity.