The Bookmarks series will profile unique bookstores and literary spaces across the country. These landmarks, often celebrated within the cities featured in our Literary Boroughs series, are home to myriad readings, panels, classes, workshops, and—of course—books. Posts are merely introductions to these spaces; we encourage readers to contribute additional details in the comments section. 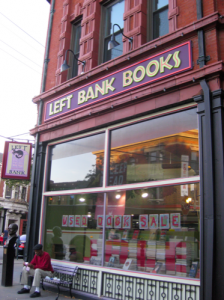 The historic Central West End neighborhood in St. Louis is home to the flagship Left Bank Books, a cultural fixture of the city since the late 60s. At the store’s heart flits Kris Kleindienst, who has loved and tended to Left Bank as its co-owner for the past thirty-nine years. On a late September afternoon, we meet near the Mystery section in the shop’s cozy basement. Kleindienst slides into her seat with a terrific exhale; she says it’s been a very busy day. Shortly thereafter, a customer approaches her with invoice concerns. “See what I mean?” she says, and hustles away into a fold of bookshelves.

While she attends to business, I admire a silver haired couple who giggles over a paperback in the used section. A group of college kids trots around the poetry aisles overhead. The resident cat, Spike, weaves around customers’ feet and down the stairs. This ceaseless Monday activity speaks to Left Bank’s heartening success as an independent bookstore despite the challenges of a changing industry. “We’ve had our ups and downs,” Kleindienst says, now back at our table and smiling. “But we’re still here.” More than just “still here,” Left Bank is thriving. In fact, a second storefront—all glass and angles and warm light—opened up in downtown St. Louis just a few years ago.

The origins of Left Bank Books

Founded by a group of progressive Washington University graduate students in 1969, Left Bank originally took root near campus in the Delmar Loop area. The collectively run shop “was really about ideas and ideals,” says Kleindienst. She joined the Left Bank ranks during a period of transition wherein the shop had very little money and bigger University City bookstores threatened competition. Kleindienst and a few others stumbled upon the Central West End location (“during one of its sleepy periods”) and purchased the storefront by assuming the liabilities from the interim owners. “We were in horrible financial straights for a while,” she says, shaking her head. Slowly, she and her team paid off their debt and nurtured their growing brick and mortar. Years later, Kleindienst says they’re still trying to ride it out. “We’ve faced a lot of changes in the book industry. I’ve seen everything happen, basically.”

In the late Aughts, a developer approached the Left Bank team about opening a storefront downtown. The prospect was an exciting one and Left Bank agreed to expand. Then, in 2008, the economy crashed. “Literally the week we signed the lease,” says Kleindienst. “It was like, are you kidding? But we thought—let’s just give this a shot anyway.” And business does continue to grow downtown despite initial financial strife. “It didn’t hurt that Borders went out of business,” she adds, laughing. 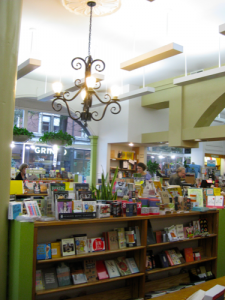 Of course, the same recession that plagued Borders also affected Left Bank. “Their [closing] was a mixed blessing,” says Kleindienst; while Borders no longer hurt local business, people didn’t flock to Left Bank either. But she and her team forged ahead, trusting in the perseverance of local industry. “Independent bookstores are in a better position because we’re smaller, we’re more flexible, and we don’t leave massive footprints,” she says. “We’re a little bit more resilient in that way.” Big business nonetheless continues to threaten places like Left Bank. Kleindienst, like many small business owners, laments Amazon’s rise to power. Because of Amazon, “people have abandoned their brick and mortar stores.”

But this isn’t to say that Kleindienst doesn’t acknowledge the benefits of e-commerce. “People seem to think that only Amazon sells things online. No! [Jeff] Bezos didn’t invent e-commerce. Left Bank has an e-commerce website and sells e-readers—this seems to be relatively unknown.” Kleindienst approaches the changing industry both pragmatically and open-mindedly: “Some think that [we endeavor only to] ‘support the relic,’ but it’s more organic and elastic and alive than that. We’re present in the present tense.” Left Bank’s physical stores, however, are still the centerpiece of Klendienst’s efforts. “Some really wonderful, unexpected moments come out of the chance to interact [in our stores],” she says.

Left Bank events, past and present

Left Bank is known for its frequent and well attended literary gatherings. Michael Chabon, Khaled Hosseini, Elizabeth Strout, and Sue Grafton—to name just a few—have been recent speakers at Left Bank-hosted events. This November, Left Bank will be working with Ann Patchett. “She opened a book store a couple of years ago,” says Kleindienst. “I’m especially excited about her visit because she’s an independent bookstore advocate.”

Cornel West‘s visit to Left Bank might be Kleindienst’s favorite: “He’d been doing events in other cities like San Francisco and 1,000 people would come see him, but about 30 people showed up [in St. Louis]. [Nonetheless,] he talked for an hour straight. Everyone was glued to him. Meanwhile, there was this horrific Midwestern thunderstorm going on outside: lightning, thunder, sheets of rain, wind. Our computer system went down [mid-talk] and our basement office flooded. We tiptoed around, trying to keep everything running and the whole time he just held forth. Then he got to a point and said, ‘Well. I think I’ll stop now.’ And the minute he said that, it was like someone flipped a switch outside. The storm just stopped. Just stopped! It was really kind of unreal—this beautiful un-reproducible moment. Organic and fabulous.”

Kleindienst doesn’t hesitate to mention other terrific literary endeavors that St. Louis has to offer. “There’s River Styx, Observable Readings, two or three really great small presses, the whole scene on Cherokee St., and—in addition to the city’s MFA programs—some great poetry. We have a really great community of writers here. We’re big enough to be pretty urban and have a fair number of things going on, but we also don’t have that immense population density of, say, Chicago, so there’s also an intimacy to it. It’s easier to do things here, in some ways.”

Kleindienst herself runs a Left Bank reading group called Novel Ideas. Recently they read Jane Gardam’s trilogy (Old Filth, The Man in the Wooden Hat, and, most recently, Last Friends [Europa]) and Kleindienst is a big fan. “She is hailed as the best British writer you’ve never heard of,” says Kleindienst. “[Our group] meant to read only the first one,” she says, “but we ended up reading all three. [Gardam] is just that good.” 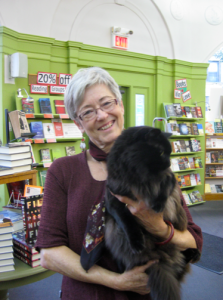 Spike, a black, long-haired beauty, is Left Bank’s third resident cat. “[Having store cats] wasn’t intentional,” says Kleindienst. She found their first cat, Captain Nemo, in the pond, half-drowned and tiny; their second, Jamaica (named after Jamaica Kincaid, of course), was a rescued stray; and Kleindienst found Spike in a dumpster. Coincidentally, all of them have been furry, black cats. But “Spike is definitely the most mediagenic one,” insists Kleindienst, and she’s certainly right. “He gets written up in nationally recognized articles about bookstore cats, [Animal Planet’s] Jackson Galaxy visited the store and met with Spike, and author Emily Giffin includes a whole scene [in her book Where We Belong] wherein a couple visits Left Bank and discusses Spike. This cat is totally more famous than anything else about our store. It’s really funny.”

As the hustle continues upstairs, Kleindienst and I return to discussing the worries of big business and threats to independent bookstore culture. These are issues that never leave her mind, it seems—and rightly so. But it’s difficult to imagine Left Bank as anything but crucial and permanent. “I think that there is some hope,” says Kleindienst, “that people feel there is something missing when all they do is look at a screen—that’s not true interaction, that’s not real interaction. [Left Bank] has been so critical in this community and I believe we still are.”