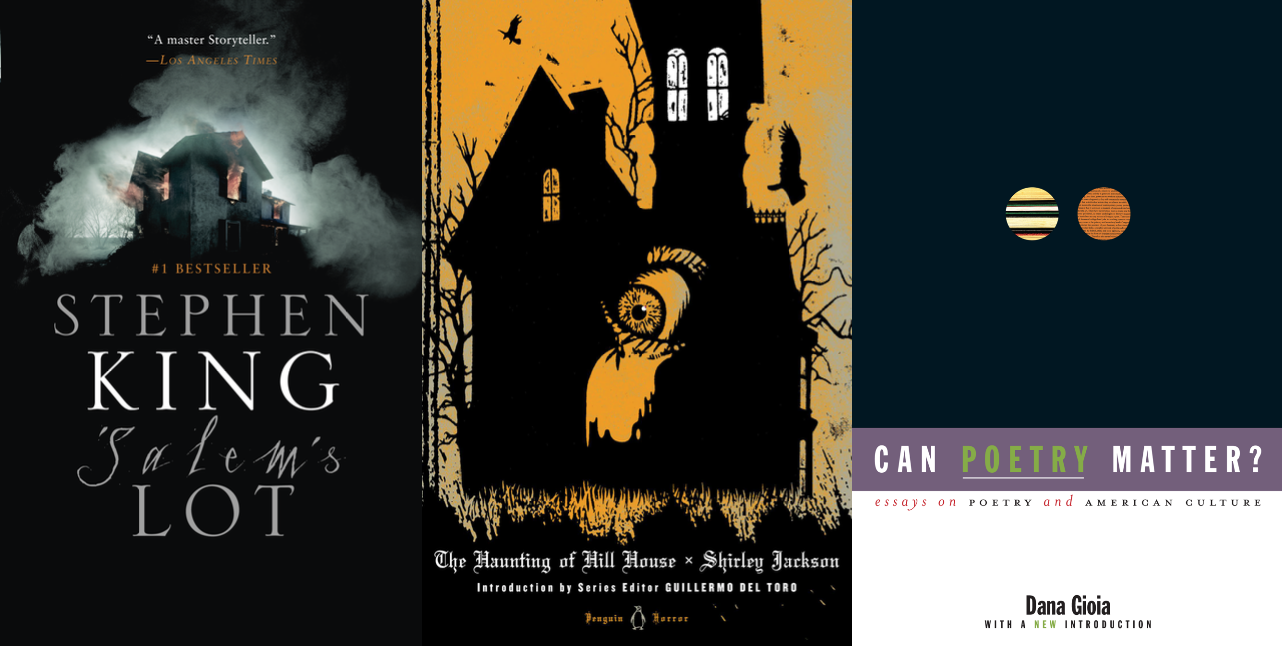 Diana’s e-mail that Ploughshares was interested in blogs about summer reading was a happy occasion, and not only because it preempted that sometimes-desperate scrabble for appropriate blog topics, as in (because I also teach grammar and usage) “Brian!  Would anybody read it if I blogged about the semi-colon versus the colon?”  (Answer:  look of pity.)  My pleasure also sprang from the fact that there’s almost never any call to talk about what I’m reading, if it’s not for a class (yeah, got to love that ivory-tower life of the mind.)  You (reader) may either thank Diana for sparing you the semi-colon, or curse her for giving me this chance to vent my readerly joy and spleen.

For purposes of what we’ll charitably call brevity, I’ll stick to the reading that illuminated my annual week at the beach.  On Sunday, May 8, I left beautiful metropolitan Cullowhee for the equally-but-differently beautiful Pawleys Island (its motto is “arrogantly shabby.”)  After graduation on Saturday, I gathered together more books than I ever had any delusions of finishing…because, after all, what if I were wrong?  What if I lost some, possibly to an attack by an alligator of literary appetites?  What if, as has happened before, a northeaster blew in and stranded my fellows and me for days in our arrogantly shabby cottage, possibly without electricity?  A girl has to be prepared.  Here are some of the assembled, the ones that actually got sand between their pages.

Stephen King’s ’Salem’s Lot (and no thanks to you for that initial apostrophe, Mr. King, which must’ve driven your typesetters crazy.)  Why seventies vampires in the age of Twilight?  For one, because I still like Stephen King’s prose.  One former fan argues that, like Garp, he’s lost his power to imagine truly, and that all his characters sound like himself now…but despite such unfortunate incidents as The Tommyknockers or Cell, there is no doubt in my mind that, as my acid- and fire-wielding friend Sonda might say, dude can write.  For two, because sometimes I remember an era when “party line” did not mean “group consensus which every member is expected to follow.”  When no one had yet heard even from Poison, let alone Lady Gaga.  When writers still did their thing on typewriters (I wrote my two unfortunately derivative teenaged novels on a manual Silver-Reed, which has something to do with the way people wince when they watch me type.)  I’d cast a brief eye over ’Salem’s Lot back in college, but for all practical purposes it remained an early, probably-not-overwritten King novel that I hadn’t yet read—what could be better?  And I was also nostalgic for vampires who weren’t cute.  Review?  I was put off by the love interest apparently having no other interest, and by the it’s-in-the-water anti-gay sentiment, but kind of charmed by the vampire yanking the cross right out of the priest’s hand.  It’s all about the faith, folks.  And I will see you sleep like the dead, teacher.

Collected Poems of Wendell Berry.  For a 2011 poet with lots of nonhuman concerns, I was pretty much criminally ignorant of Wendell Berry’s poetry.  Because in such cases your gaps are apt to come knocking on the door, I fortunately heard some of that poetry on an episode of Speaking of Faith I’d downloaded for a cross-county all-day internship observation run, and vowed I would read it.  Review:  you don’t need me to tell you that when Berry’s on, he’s on.  You may want to hear that I was very interested in the poems about marriage.  This was an earlier Collected, the one my library happened to have, so one favorite “The Wild Rose,” wasn’t there, but lots of others were, including the one called simply “Marriage.”  It begins

How hard it is for me, who live
in the excitement of wome
and have the desire for them
in my mouth like salt. Yet…

You’ll have to go read it if you want to know “yet what”—I’m doubtful as to whether I or Ploughshares has the rights to reproduce whole poems in digital media.  It can be found online, but it takes awhile—“The Wild Rose” is easier, and I’m assuming Google Books, to which I’ve linked above, has bought some kind of rights to it…though that is not always a safe assumption.

Dana Gioia’s Can Poetry Matter? Why?   Well, because my mother gave it to me more than a decade ago and I’d never really dug into it.  Because while I hope you won’t hear me indulging in sweeping generalizations about how “no one” reads poetry “anymore” and it needs to be brought “back to the people” and all that, I do have some concerns about the willful obscurity in which a lot of poetry tends to fester, and Gioia’s got more thoughtful, historical, literate responses to those concerns than I ever aspire to have.  Because I was finally feeling smart enough to undertake non-sonic theory in this my zone of divine mystery.  And because something in my book sack had to provide a little geek cred.  As it turned out, one of my housemates spent the week snuggled up with the ever-lively Thorstein Veblen, so I was lucky to have Gioia to preserve my self-esteem.  Review?  Well, shame to confess, I’m not quite finished Can Poetry Matter? yet, though I made steady inroads.  It has made me wonder, though, if I might sometime write an ode after all, and made me feel the narrowness of my lyric free verse tradition.

Zora Neale Hurston’s Tell My Horse.  Admittedly this is because I’ve got a couple of Hurston articles back for cutting and revision, and this book is integral to one of them…but I still love it, though I wonder  if they do in Haiti.  For me—all you Hurston scholars, brace yourself to correct as needed—this marks a point at which even after such triumphs as “Sweat” in FIRE!, readers can really see Hurston finding her own philosophy and her own feet, and the relationship of that process to Haitian and Gulf Coast earth-based religions—to Vodoun—is more than coincidental.  Mules and Men is also good for this.

Diana Gabaldon’s Outlander.  Why?  Because a colleague had recommended it to me as good beach reading.  My soul and brain are riddled with quicksand soft spots for the popular, low-brow, page-turning, and simply trashy.  Review:  I am pleased to report, however, that Outlander was considerably more dense in its detail work than I expected:  more pleasingly indulgent than trashy, somewhat in the spirit of Mary Stewart, if anyone remembers her.  I can, but naturally, do some caviling—surely Mr. Fraser would’ve gotten, and died of, gangrene from at least one of those wounds, including the ones before the story began? wouldn’t eighteenth-century road warriors smell just a tad worse?  and, for the record, I’m pretty sure there’s still never been a documented wolf attack on a human being.  But there are more lively subplots than heaving bosoms, and such lovely dialogue as occurs is (in most cases) potentially speakable—there’s not too much I’d go to the rack rather than say out of my mouth.  I should’ve had more faith in Pam, who pointed me thither.  I don’t know that I’m up for any of the numerous sequels, but this one got me admirably through a thundery night with a worried dog.

Orrin Pilkey et al’s How to Read a North Carolina Beach.  This was, of course, South Carolina…but I take this salt-warped little paperback to any beach I’m lucky enough to visit, and I highly, highly recommend it to anyone coastal-bound.  Why?  Because it has Neat Beach Facts, of course:  sand formation, sharks’ teeth, types of waves (this year’s special:  spilling breakers!)  Because (now that I’m over forty) I manage to forget its salient points every year, and thus have the pleasure of learning them anew.  But mostly it’s the pleasure of persecuting my fellow beachgoers.  I can clear a room, or if need be secure a beach chair, by wandering up, brandishing HtRaNCB, and remarking hopefully, “Who’s up for an exciting Beach Fact?”  or “Guess what Pilkey says about mole crabs!”  Review:  if you find any perverse amusement in your own geeky and pretentious nature, this book is for you.  And your housemates, who surely pine to know more about barking sand.

Along the same lines, there’s “the Sibley”, aka The Sibley Guide to Birds, this particular edition circa 2000.  Despite one savage accusation I’ve seen that David Allen Sibley mistakenly grouped juncos with finches, I love this dense guide with its beautiful, precise illustrations from every angle, and if I ever meet David Allen in person, I fully intend to swoon.  With the aid of this weighty and decidedly not waterproof tome (which I did not cart in the kayak) I happily identified the spotted sandpiper, the ruddy turnstone, the red knot (in migration), the seaside sparrow and a succession of plovers, willets, and sanderlings.

Shirley Jackson’s The Haunting of Hill House.  Probably this one needs no more explanation than that I like to read it each year around my birthday.  Review:  still scary in broad daylight, let alone in the night, in the dark.  Not helpful when lightning spears the sea, the walls tremble under the slashes of rain, and the dog quivers under the bed.  (Okay, I’ll admit it—I let the dog on the bed.  Thanks, Shirley Jackson.)

Altogether summer reading has a lightheartedness to it, a willingness to splash around (Hunger Games and A Grief Observed, you’re next) and a sense of boundless time to enjoy, which are as seductive as they are illusory.  So there are more—of course there are more, these were from more than a month ago!—but what’s this I sense from the bleachers?  Could it be…weariness?  Surely not.  I don’t doubt that it is, rather, a passionate desire to go plunge into your own summer reading…so if you’re out there, and you have some suggestions, comments are open.  You know what to do.