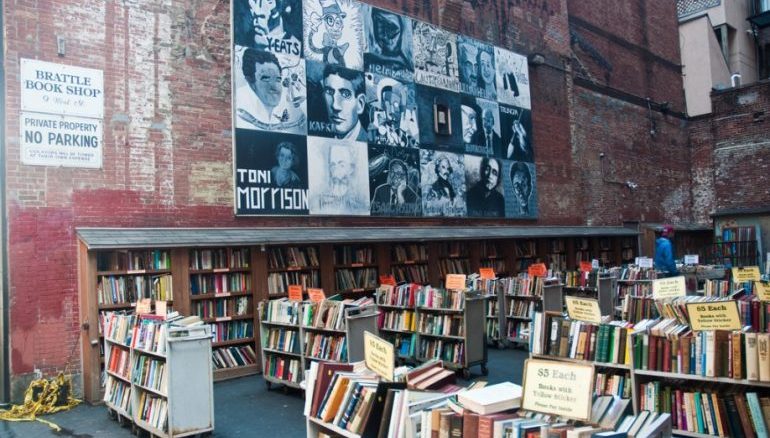 Oscar Wilde was the son of Lady Jane, an eclectic socialite who collected artists like trophies. Bram Stoker was a frequent feature in her Saturday night salons, although the two met at a young age and were fast friends through the rest of their lives. Stoker allegedly admired the intellectual boldness of the Wilde family and admired their ability to tell stories. In one letter to Wilde, Lady Jane lauded Stoker’s “excellent” character. It seems the friendship was a case of opposites attracting, since Stoker saw himself as a gentleman with a profession and Wilde concerned himself with his image as a dandy. According to Schaffer, it’s possible that Wilde served as inspiration for Count Dracula—truly, it’s easy to see Wilde as a symbol for anti-Victorian repression and a foil for Dracula. Unfortunately, Stoker’s raging homophobia tore the two apart. When Wilde died, Stoker was not among the two dozen mourners at his funeral.

As a young girl, Louisa May Alcott’s family moved to Concord, Massachusetts, where they became neighbors of Ralph Waldo Emerson. Emerson and the Alcotts became close personal friends, and as a result Alcott had exclusive access to Emerson’s library of classical and philosophical works. Alcott reportedly borrowed books from Emerson’s library in exchange for wildflowers she would leave on his doorstep. In an essay following Emerson’s death, Alcott wrote of her neighbor’s unusual hospitality and her amusement when he reacted with indifference to the state of his library after his home had burned down: “I see my library under a new aspect,” he said.

Truman Capote and Harper Lee, neighbors since the age of five, were different from the beginning. When Capote was bullied in the schoolyard for his small size, Lee jumped in with the gusto of a young tomboy and defended him. Disenchanted by their often absent mothers, the two left for Kansas where Capote researched the murders he later wrote about in In Cold Blood; Lee followed as his research assistant. To stay in the good graces of locals, Lee and Capote often entertained their interviewees with extravagant dinners and theater productions in New York City. When Capote’s book was finally published, he dedicated part of the story to Lee, but never cited her as his assistant. The slight resulted in a falling out between the two literary giants, and Lee’s resulting distrust is perhaps why she avoided the spotlight for the remainder of her life.

Dorothy Parker and Robert Benchley, or ParkBench, originally met in New York while working at Vanity Fair. The two were so devoted to each other that they often joked about getting married; Benchley even quit his job at Vanity Fair when Parker was fired for a particularly harsh theatre review. Parker was of course in demand, and went on to work at The New Yorker and Cosmopolitan. Although she was known for her wit, nothing could have been funnier than the almost foot difference of height between Parker and Benchley. When ambling down the street, the two were often called a “walking pipe organ.” After their stint at Vanity Fair, Parker and Benchley formed the Algonquin Round Table with friends, a “vicious circle” where the greatest wits in New York City boozed up speakeasy style over lunch.

“Jimmy, there is too much to think about you…” Toni Morrison’s eulogy to James Baldwin in The New York Times begins. There is too much to say about the friendship between both writers – in fact, entire collections are written on the lives they led together (see James Baldwin and Toni Morrison: Comparative Critical and Theoretical Essays). The two became friends while negotiating a book deal at Random House. Although she failed to convince Baldwin to sign her book deal, the two became fast friend. The two closely influenced each other’s work, the magnitude of their friendship likely similar to Capote and Lee’s. As Baldwin said in a final interview before his death, Morrison was not just his friend, but an ally.