Home
»
Authors
»
Borne Back Ceaselessly into the Past: Visiting Authors’ Graves 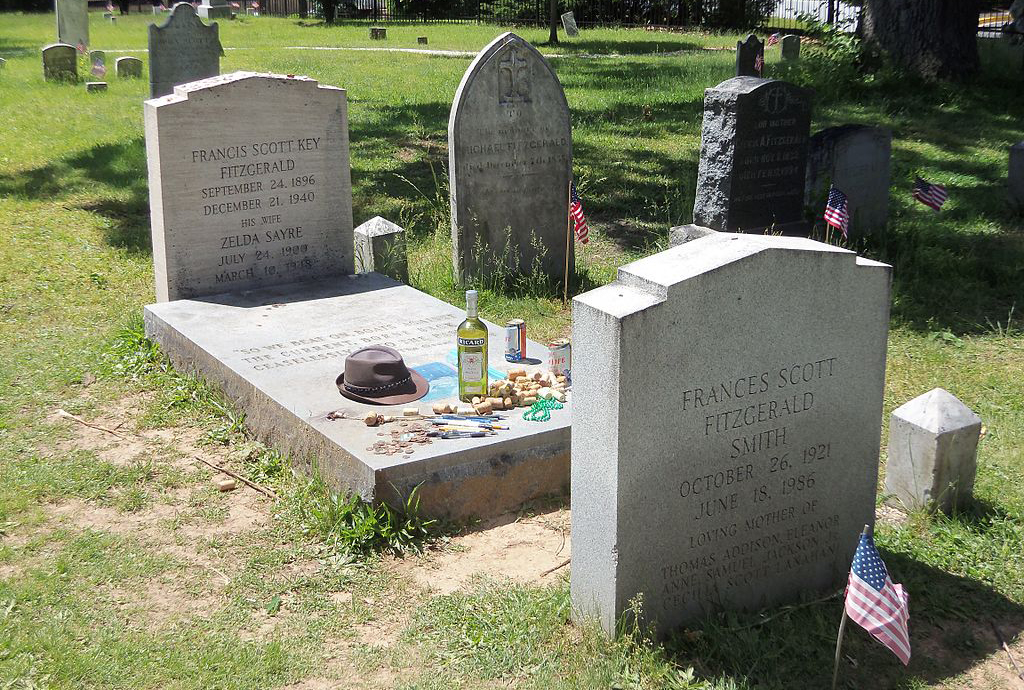 I’ve always liked cemeteries. Not in a morbid or macabre way. I’m not really a graver, a tombstone tender, stone stroller, death hag, or taphophile, I just like the quiet peace of cemeteries, those simple records of lives that came before.

My daughter has spent much of her childhood in cemeteries, giggling inappropriately over stones like those for women named “Tootie” and “Thankfully Dick” or the angel-wing–shaped monuments that resemble boobs. It was in a cemetery that she learned the word “phallic.” I, on the other hand, am fascinated by the eloquence of gravestones for the spare ways that they capture the characters of the dead.

That’s especially true of writers’ graves, which often strike me as peculiarly wordless monuments to lives lived by words. There is nothing, for instance, on the Cavendish, Prince Edward Island grave of Lucy Maud Montgomery that acknowledges her as the author of Anne of Green Gables. Scrollwork on the cemetery archway does proclaim it “The Resting Place of L.M. Montgomery,” as if another hundred people aren’t also buried there. Two pines guard her stone and a flower garden spreads out in front. A fence and chain provide added measures to keep tourists at bay. Montgomery’s husband, The Reverend Ewen MacDonald, is listed first, followed by “Lucy Maud Montgomery MacDonald,” identified only as “Wife of Ewan McDonald”—the more famous writer wife subsumed under her husband’s identity. In what strikes me as an amusingly passive aggressive move, his name has been misspelled in the second reference.

On Author’s Ridge at Sleepy Hollow Cemetery in Concord, MA, paths are well-trod around the graves of Louisa May Alcott, Ralph Waldo Emerson, and Henry David Thoreau. Pencils, pens, notes, a hotel-sized container of jam, a Euro, and a yuan lay scattered around the unassuming little stone marked “L.M.A.” Right behind Alcott’s, we found a small crowd around Emerson’s grave, strolling, picnicking on a low stone wall and taking pictures of the grave littered with dirt-encrusted pencils and notes.

In nearby Amherst, long weeds grow around leaning, wafer-thin gravestones, their words often worn off. Emily Dickinson’s grave is so close to the iron fence that surrounds the family plot, it’s a little hard to read, reminiscent of the famously private and quietly subversive poet: “Born Dec. 10, 1830/ Called Back May 15, 1886.” Along with three Altoids my friend Anna found in her pocket, we left a note:

Dear Emily,
For you—
Some altoids—breathe
Peacefully—
And mintily—
Sophie, Nancy, and Anna July 31, 2012

On a bitterly cold day at dusk, my friend Sara came with my daughter and me in search of F. Scott Fitzgerald’s grave in Rockville, MD. There were no signs, no fancy iron scrollwork arch, no stately walkway of family stones or big monuments like at Mark Twain’s plot in Elmira, NY. Just a “No Parking Anytime” sign in the circle drive. The adjoining church was stark white, as if bleached. In its graveyard, rows of rounded white stones shadowed by oak trees practically glowed in the dark. At a nearby intersection, lights blinked from red to green to yellow.

My daughter shone her cellphone flashlight so we could read the lettering, just names and dates for Francis Scott Key Fitzgerald and “His wife Zelda Sayre.” According to Maureen Corrigan, this was actually Fitzgerald’s second grave. Originally, because he was lapsed and died a penniless alcoholic, he was denied burial in a Catholic cemetery. In a recent book, Corrigan notes the striking similarity to Jay Gatsby’s sparsely-attended funeral.

At the foot of the stone was an unopened can of Dr. Pepper, an intact Hershey bar, two mechanical pencils, a votive candle, a miniature liquor bottle, a bundle of dried flowers, and a handwritten note from someone named Elizabeth, thanking him for helping her get her butt in gear to submit her work.

“I didn’t know the composer of ‘the Star Spangled Banner’ was buried here,” Corrigan once heard someone say. Fitzgerald’s distant cousin Francis Scott Key is actually buried in Frederick, MD, where there’s an enormous monument in his honor and the word “Key’ spelled out in topiary at its foot. In contrast, Fitzgerald’s unassuming plot is only distinguished from the others in St. Mary’s cemetery by a large flat stone engraved with The Great Gatsby’‘s last line:

So we beat on, boats against the current, borne back ceaselessly into the past.

Which seemed to me kind of a summing up of what cemeteries do, bear us into the past. In the end, the real, lasting contributions of these writers have nothing to do with comparatively generic and indistinguishable collections of stone and flowers.  Nevertheless, there is something poignant about the items people leave behind, reminders of intense, transformative connections to literature and the power of words and stories.