Home
»
Book Reviews
»
Nonfiction
»
Breathe: A Letter to My Sons by Imani Perry 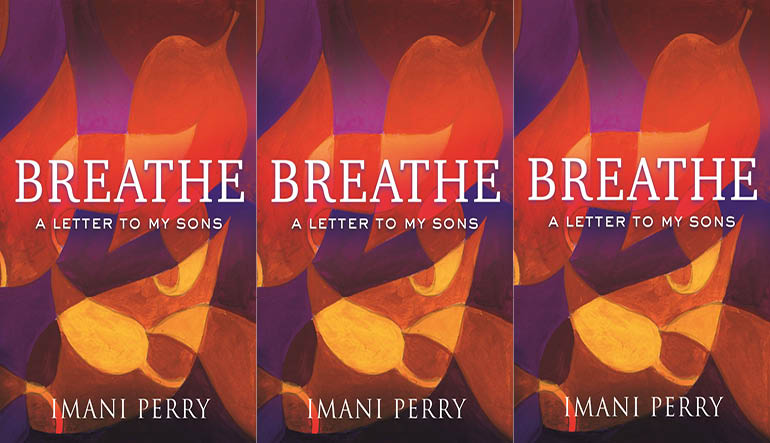 In the afterword of Dr. Imani Perry’s new memoir, Breathe: A Letter to My Sons, she explains that the conception of the book stemmed from a question from her editor, Gayatri Patnaik:  “Would you be interested in writing a book that is a letter to your boys?” Having already spoken about her sons on social media and fostered a habit of writing letters to them, as well as others, Perry welcomed the idea. Summoning the tools that have established her as a distinguished researcher and scholar of the Black experience, Perry, in the legacy of James Baldwin, and more recently Ta-Nehisi Coates and Kiese Laymon, employs the epistolary form to craft an intimate meditation on the fears, hopes, and responsibilities of raising two Black boys in America. Using her comprehensive knowledge of history and myth, among other resources ranging from art to personal anecdotes, she addresses, dissects, and offers guidance for the challenges black youth face, that her sons face, while, as she writes, trying to “become in a world bent on you not being and not becoming.”

Early in the book, Perry informs her sons of the precious gift it is to mother them. Her mother, her sons’ grandmother, has told her that, “Mothering Black boys in America—that is a special calling,” and Perry makes clear that this calling is not burden. Instead, it is an embraced reality that requires  Perry to ask herself how she will rise to the occasion. How can she protect her Black sons within a society rigged with institutional structures designed to destroy and malign their bodies and minds? How can she recognize the fear of being unable to guarantee her children’s safety, of what, as she explains to her sons, “comes because your preciousness collides with the ways of the world,” but not concede to it? In what ways can she arm them with the weapons needed to combat a “nation that is [theirs] by inheritance and birth” and is “in a state of panic and disaster?”

Perry begins with affirming to her sons that they are not problems, a truth she later reiterates. At once, it is a response to a statement she rejects, and credits to that it must be terrifying to raise a Black Boy in America. But as the book progresses, her assertion looms larger as she contextualizes her sons’ place within the country. It is the assurance of their value and worth, despite the edifices that seek to confirm otherwise, that provide instruments for resistance. She reminds her sons of their grace—the same grace that “made the ancestors hold on so that [they] could become.” She instills in them pride in their lineage, which includes the history of slavery, and denies sentiments of shame. Instead, she writes that for her, “that my people became, created, and imagined from a position of unfreedom is a source of deep pride, not shame. I hope you learn that too. What better evidence of human beauty and resilience could there be?”

In her desire for her sons to oppose the contraptions of injustice and the “national messages about [their] undeservedness and inadequacy,” she asks her sons to live freely, to fly. Perry understands that her instinct to keep them safe cannot impede their growth from Black boys to Black men. Black men who are confident, yet vulnerable—who, when “hurt, cry” and when are humiliated, “let the sadness be at least as present as the rage.” She advises them that their “human value is not bound to external recognition, nor is it bound to unrepentant diminishment.” She wants success for her children, as any mother does, but emphasizes that they should not become bogged down with the frivolity of a certain depiction of achievement. Perry’s realization of success is of a different sort:

“I want you to be able to eat, to keep a roof over your head, to have some leisure time, to not struggle to survive. I want you to be appreciated for your labors and gifts. But what I hope for you is nothing as small as prestige. I hope for a living passion, profound human intimacy and connection, beauty and excellence. The greatness that you achieve, the hope I have for it, for you, is a historic sort, not measured in prominence.”

Reflecting on family history and that of the African diaspora, she confirms her sons’ fortune. It is rich, complete with prospects and opportunity. They have had the privilege of exposure—to education, people, and culture. But though the accident of birth has placed them in a social class that shields them from certain aspects of Black life, it cannot safeguard them from the entirety of racism. Be it transgressions directly affecting them, a store clerk who may overlook them, or wrongs committed in society, such as the death of Troy Davis,  Perry’s sons are witnesses, and they respond. They weep and question the failed morality of their country, because as their mother voices to them, “. . . you are Black in America, which means rage is your familiar, even if you haven’t called it that yet.” Perry, in her part, does not hide the cruelty of the crimes their country has, and continues to commit—dating back to the Founding Father, George Washington, whose false teeth were made from a “variety of materials, including Black human’s teeth,” to a Philadelphia man in 1887, “who relished the lustrous shoes made from the skin of an African.” She makes them aware of the depths of brutality their country is capable of reaching, and in turn, challenges her sons to be better, asking: “How will you treat your word? How will you hold your heart? How will you hold others?”

The responsibility of the parent is to nurture their child’s physical and emotional well-being, to provide the skills necessary for them to live healthy, independent, and hopefully, fulfilling lives. Perry’s wholehearted and sincere letter to her sons is part of her rearing, one in which she learns, too, telling them “. . . you teach me who you are much better than I teach you who I think you should be.” And in that revelation, Perry achieves her task of feeding and nourishing her sons while allowing space for them to feed themselves. It is the manifestation of the love and dreams of a Black mother for her Black sons. It is the realization of the “radical discipline of becoming.”

Tags:Breathe: A Letter to My Sons, Imani Perry