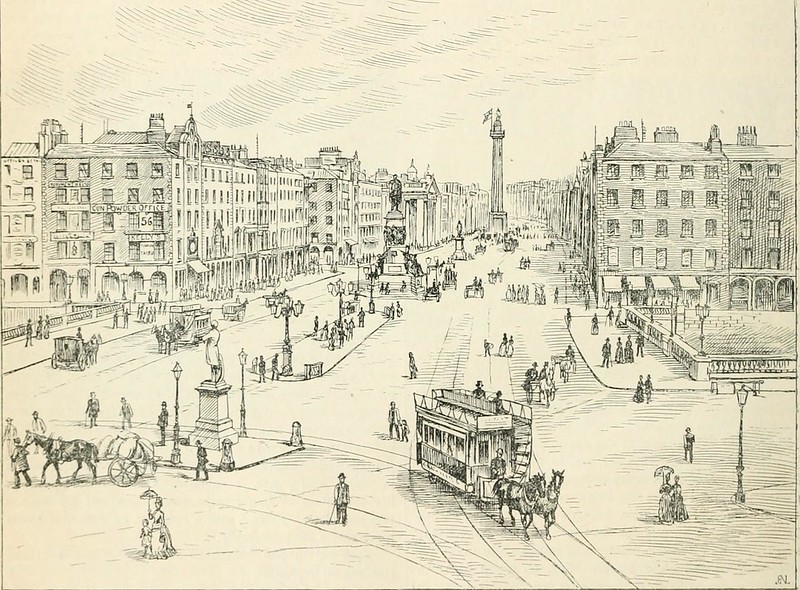 Tension is not unfamiliar to those living in the United Kingdom today, nor was it to those living in centuries past. Once again, divisive politics, in Brexit and in issues surrounding immigration and sovereignty, have led to the theatrical use of propaganda in ways similar to those used in England’s imperial past. While mass media of the Caroline period (which spanned from 1625-1649) consisted of, among other things, popular ballads and the theater, the use of circulated manuscripts and printed pamphlets to spread news was also increasingly important. These forms of media targeted individuals from all walks of life—literate and illiterate, poor and wealthy—just as pro-Leave advertisements were meant to resonate with much of the UK’s population.

Meant to emphasize the need for Englishness and English unity, much of the advertisements that supported Brexit focused on two key themes: immigration and sovereignty. These ads, used to drum up support for the UK’s exit from the European Union, are, just as much as the monarchist plays of the 1630s, a call for unity against perceived disorder and chaos, which threatens what the group in power holds to be a “true” vision of England and Englishness. In reality, that chaos has yet to come, and the only unity to be found lies in loyalty to opposing groups—Leave and Remain, Parliament and Crown—rather than to the United Kingdom as a whole.

The monarchist plays of the 1630s, some of the least subtle uses of propaganda at the time, were used to spread the message of the superiority of the English over all others in terms of sophistication and culture, and to convince the playgoers that they, too, would benefit from adopting English dress, language, and customs. This was nowhere and nowhen more evident than at Dublin’s Werburgh Street Theatre in the late 1630s, the first purpose-built theater in Ireland. Run by James Shirley, a member of the Queen Henrietta’s Men company and one of London’s preeminent playwrights, the Werburgh was the brainchild of the viceroy of Ireland, the proud and haughty Thomas Wentworth, and the first Irish Master of the Revels, the erudite Renaissance man John Ogilby.

Shirley crafted a repertoire of plays he was sure would command regular attendance, just like in London. Relying on old classics, like Ben Jonson’s The Alchemist and Thomas Middleton’s No Wit, No Help Like a Woman’s, Shirley tried to show his Irish audiences the height of English stagecraft, and, in so doing, also impart messages of the value of assimilation to English customs. In most ways, he was spectacularly unsuccessful, if the prologues he added to plays performed at the Werburgh are any indication. They make clear that he could just not get the Irish to attend his shows. The progression from the promise and potential of Ireland and of the Irish in the prologue to The Royal Master (1638)—

It is our wonder, that this fair Island, where
The aire is held so temperate (if there
Be faith in old Geographers, who dare
With the most happy, boldly this compare)
That to the noble seeds of Art and Wit,
Honour’d else-where, it is not natural yet.

—to the desperation in that of his final play for the Werburgh, Saint Patrick for Ireland (1640)—

We know not what will take; your pallats are
Various, and many of them sick I feare:
We can but serve up what our Poets dresse,
And not considering cost, or paines to please,
We should be very happy, if at last,
We could find out the humour of your taste…

—is particularly telling. Even though Shirley had intended to sow those seeds of Art and Wit, his choice of plays just were not bringing people in. And he could not figure out why—he had chosen plays that were staples of the London theater. He even wrote plays that he went on to produce in London to some acclaim, such as The Constant Maid and The Politician.

Saint Patrick for Ireland was the last play that he wrote for the Werburgh before heading back permanently to London, where he felt that, as the self-proclaimed successor of Ben Jonson, he was better appreciated. It seems that Saint Patrick for Ireland was Shirley’s last-ditch effort to entice the Irish to appreciate English sophistication and culture, and he threw in all of the tricks he kept up his sleeve. The muddled result is a neo-miracle play, a special effects bonanza which features a comedic Irish bard (who is untalented), false gods, villainous Irish pagans, villainous Irish royals, fire effects, and quite possibly men in snake costumes for Patrick to later dispel.

It can be difficult to imagine a worse way for Shirley to gently convince the Irish of what he would conceive of as backwards and barbarous ways than with Saint Patrick for Ireland. By making the majority of the characters villains, stupid, naïve, or untalented hacks—the Irish had prided themselves on their bardic traditions for generations—Shirley’s frustration came through loud and clear. He began to condescend to them and try to literally put the fear of God into them, through the use of the Patrick story, much like pro-Brexit ads make the European Union out to be a hulking monstrosity of an empire of laws and overreaching authority. The only way to keep the UK’s National Health Service, schools, and other public services safe was to separate the UK from the EU’s imperial ambitions. Importantly, both propaganda campaigns also used images of past glory and heroes as a means of manipulating nationalist sentiment—St. Patrick by Shirley, and Isaac Newton, Wellington, and Churchill, among many others, by the pro-Leave campaign.

On its surface, Saint Patrick for Ireland is the story of the Christianization of Ireland. From the beginning, there is a villainous Archimagus who serves Leogarius, a not-entirely-virtuous king. Both they and their underlings seek only pleasure and power and use underhanded Art (magic) to obtain it. They also both seek to prevent a prophecy from coming true:

A man shall come into this Land,
With shaven Crowne, and in his hand
A crooked Staffe; he shall command,
And in the East his table stand;
From his warme lips a streame shall flow,
To make rockes melt, and Churches grow,
Where while he sings, our gods shall bow,
And all our kings his law allow.

To prevent this invasion, Leogarius and the Archimagus employ both soldiers and magic, but are ultimately unsuccessful, as they were not expecting a churchman and his priests to confront them, but an army. Throughout the play, the pair attempt to discredit Patrick and kill him with poison. This backfires, and Patrick’s ability to heal a courtier who had consumed the poisoned wine meant for the saint leads to the genuine conversion of the Queen. Throughout the play, the Archimagus and Leogarius scheme to bring down Patrick, and end up either dead or forced to convert to Christianity. Patrick, on the other hand performs miracles that inspire others to follow him—some out of love, some out of fear.

Patrick’s conversion of Ireland is more than just a religious one. He seeks to emphasize the natural virtue of many Irish people and to bolster their loyalty to his deity, just as Shirley and Wentworth wanted to inspire the Irish to Protestant loyalty of their shared king. When one reads the play as a means of conversion, not only as a narrative of conversion, meant to appeal to the Irish for their protestations of loyalty and support for the Crown, three groups of characters emerge.

Of these groups, we see those who actively resist conversion, such as the pagan Archimagus, who would rather sink into a fiery pit headed to Hell rather than submit to Patrick’s ministering. These individuals work to bring about Patrick’s downfall and are united in their resistance to him and his priests. Another group includes those who genuinely convert. They see the goodness and virtue in Patrick and his message and choose to follow the slave-turned-saint. These individuals include the Queen; her younger son, Conallus; and his betrothed, Emeria. By the end of the play, Patrick appoints them to positions in his new Irish order—Conallus as he who will lead Ireland to new heights as its first Christian king and first Abbess. The third group includes those who are swayed by the overwhelming power of Patrick and his heavenly benefactor to convert, not out of pureness of conviction. Leogarius falls into this group, saying, “How I shake,/ And court this Christian out of feare, not love?” It is easy to surmise which of these groups Wentworth and Shirley would prefer their contemporary Irish cohort to emulate (those who genuinely converted to Patrick’s Christianity), but Wentworth was also never one to shy away from displaying might and majesty, and so would have also accepted protestations of loyalty from those who were swayed by his power and that of his divinely appointed benefactor.

While Shirley and Wentworth could not have known all of what was to come next for their beloved monarch, in the late 1630s and early 1640s continued conflict loomed on the horizon. In a few short years, their world would turn upside down and their elected officials in Parliament would go to war with their divinely appointed ruler. Questions of who holds sovereign power and of who should and does belong in the United Kingdom are just as pertinent today as they were in the seventeenth century. On Shirley’s part, creating both art and propaganda, Saint Patrick for Ireland would prove to be anti-prophetic. In his world, even though the most virtuous of the Irish who eagerly convert earn a place in Patrick’s new order, what happens to those who resist conversion, or who only go along with Patrick because of his power? Even though the aggressively benign conversion force of Christianity would succeed in winning over Ireland without any blood shed by Patrick or his men, there would continue to be centuries of conflict over who should rule Ireland—the British crown or the Irish themselves? Patrick’s order was no panacea and that imperfect foundation is showing its cracks today with the fears and vitriol over Brexit.

Shirley’s narrative of willful conversion was meant to teach the Irish playgoers that in conversion, in loyalty to the divinely appointed rulers on Earth, there is peace and prosperity. As Patrick prophecies to Conallus, who devoutly follows the saint by the end of the play,

Your Crowne shall flourish, and your bloud possesse
The Throne you shall leave glorious: This Nation
Shall in a faire succession thrive, and grow
Up the world’s Academie, and disperse,
As the rich spring of humane and divine
Knowledge, clear streames to water forraine Kingdomes,
Which shall be proud to owe what they possesse
In learning, to this great all-nursing Iland.

While the Facebook and television advertisements that sowed fear of immigrants and raised questions of British sovereignty were more overtly propaganda than Shirley’s play, they all seek the same goal: to call upon denizens to unite in the face of perceived oncoming chaos and adversity, whether that threat is manufactured or legitimate. Questions of conversion and loyalty remain at the forefront of Brexit debates, just as much as they were a part of the national conversation that led to the Wars of the Three Kingdoms and, ultimately, a dark era in English history.