Home
»
Writing
»
Bring In the Old: The Writer as Collector 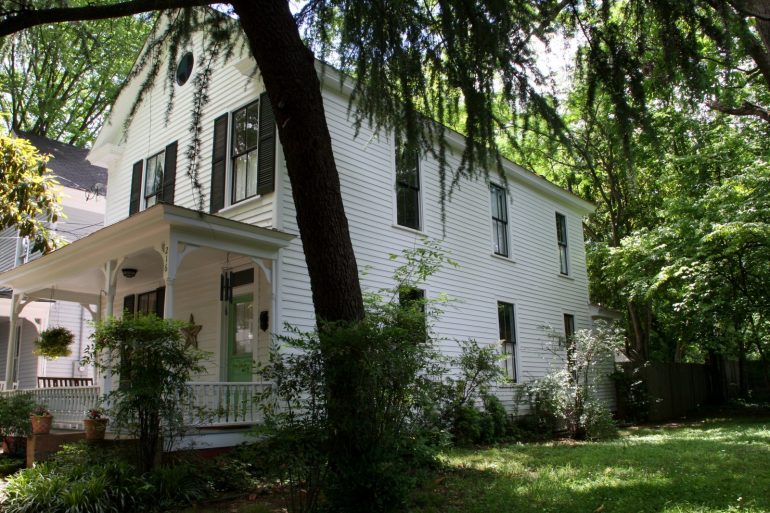 There was a time in my mid-twenties when I was unhappy, for reasons that now seem ridiculous to me but were no less potent because of their ridiculousness. I wanted to be a writer, but I worked a business consulting job from home and spent a lot of time alone in my old Victorian in downtown Raleigh–a house once owned by a woman named Swannanoa Branch. We used to get Swannanoa’s mail–mostly evangelical pamphlets that talked about bathing yourself in the “fire of Christ’s love.”

When the realtor showed us the house, she was careful to point out that we would be the proud owners of the oldest in-tact outhouse in Wake County. I think this appealed to me more than to my husband, who opened the door with the sawed-out silhouette of a moon, revealing a rusted, cricket-infested toilet. It was an outhouse turned garden shed. I have always approved of adaptive re-use; take something old and make it your own. Abuse and honor it. Fill it up with your spirit. This is one way to make art.

Apparently Swannanoa spent a lot of time in the old house, having inhabited it from the day she returned from serving as a nurse in World War II until the early 2000s, at which time the second floor was no longer usable and raccoons ruled the attic. She didn’t have air conditioning, and the postman told me he’d find her on the porch, fanning herself, white baby powder in the ample folds of her neck. The brothers who renovated her house discovered her nurse’s uniform in a drycleaner’s bag, hanging on the back of the bathroom door.

We bought the house just in time for my husband to start veterinary school. I spent my evenings writing bad short stories in secret, achieving a good sentence roughly every ten pages. This was the year I knew I had to change–give myself permission to enjoy more of my life through writing. But I didn’t, not fully anyway, and I felt jealous watching my husband pour himself into his veterinary career while I aped the persona of a business woman, someone who spoke convincingly of value propositions when she wanted to speak passionately about prose.

When it rained, I would pace the backyard afterward, ear glued to the phone on yet another conference call, and pick up the pearlescent buttons, jewel-toned marbles, and pottery shards that used to push their way up from the dirt we never managed to grow grass on. When my husband came home from long days at school, I would thrust my finds into his face: A brass button. The bottom of an old wine bottle. A curiously rugged shred of peach-hued wallpaper. A stamped brick.

Perhaps, after having majored in anthropology in college, I was a thwarted anthropologist with the need to collect and study objects, to form a story using found ingredients. A buried brick or two was evidence of a root cellar; a rusted key nodded toward a china cabinet. I kept these fragments of Swannanoa’s life in a display case, an impoverished curiosity cabinet, and I imagined her walking the garden in her prime.

Walter Benjamin’s famous essay “On Unpacking My Library” plumbs “the springtide of memories which surges toward any collector as he contemplates his possessions.” “Every passion borders on the chaotic,” he writes, “but the collector’s passion borders on the chaos of memories.” Swannanoa’s memories were not mine, but the longer I spent my seventy-hour work weeks inside the house, the more I could feel a bizarre lineage forming–that of the shut-in at 216 Pace Street. And it was that unhappiness from which my first stories sprang.

When I left the house on Pace Street and moved to Vermont, I became a writer. I became a writer because I was so broken down by early motherhood that I stopped fearing criticism long enough to throw my work out into the world. Moving into an old farmhouse, I began collecting again, amassing things I thought reflected my aesthetic. My new life. Quilts, jadeite bowls, glass bottles, chairs worthy of a napping cat and a writer working with a baby asleep on her shoulder.

I do not find it unusual that many writers I know acquire vintage clothes, buy old homes, and rescue animals. For one, we don’t have Wall Street salaries, and secondly, we’re suckers for backstory, particularly that which is left to the imagination. Our job, after all, is to make up lives, engage in epic games of pretend.

When I read Alexis Smith’s novel Glaciers, I felt we were like-minded: she seemed prone to the same enchantment I felt when faced with storied, imperfect objects. When she came to the Brattleboro Literary Festival, I offered to take her shopping at the vintage store down the road. I found a military-green wool sweater that made me feel like I had the flu after wearing it a full afternoon. Smith found a chic black dress which, hours later, she admitted smelled like cat pee. She wore the dress for her panel at the festival, and read the following passage from Glaciers:

Swannanoa’s nurse’s uniform must have been that way, too. Perhaps it was what she felt good in, the clothes she was wearing when she felt most herself. The uniform represented the woman she wanted to be, and had been.

Benjamin mentions our “mysterious relationship to ownership.” It doesn’t take a philosopher-king to determine that people are compelled to line their nests with stuff–items that may be valuable but useless, items that reflect our individual aesthetic, transport us, and speak to poetic possibilities. We are often thinking not just about what we have been, but about who we might become. We are thinking of our own stories.

I want to believe that you can look at my hand-painted trays, second-hand china, ikat tablecloths, goats in dog collars, and the spaniel with an underbite hunting rabbits in my backyard, and know something about who I am. Who I think I am, now, as a writer, mother, and farmer.