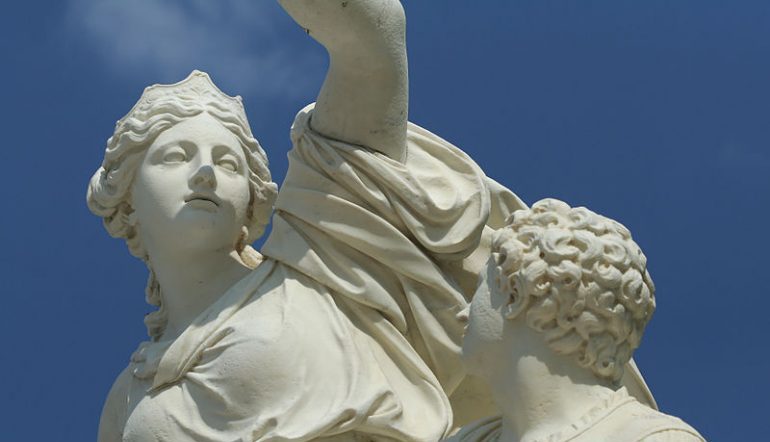 In book five of The Odyssey, the sea goddess Ino comes to the aid of a storm-tossed Odysseus. She emerges from the waves and loans him her veil, a talisman that ensures he will arrive in one piece on the island of Scheria, his last stop before returning home to Ithaca.

Ino was once human, nurse to the young Dionysus in one prominent rendering from Greek mythology. Judging from all the stories our Greco-Roman friends have left us, her family life bore characteristics typical for the period–filicide, madness, frenzied escape into the sea and subsequent transformation into a divinity.

Despite Ino’s good intentions, Odysseus is suspicious. She urges him to jump overboard and swim for it, promising that the veil will protect him. But he decides to stay in his boat. He’s already been jerked around by the gods a few too many times. In Robert Fagles’ translation, Odysseus says:

As long as the timbers cling and joints stand fast,

I’ll hold out aboard her and take a whipping–

once the breakers smash my craft to pieces,

I like Fagles’ use of “craft.” The word isn’t Greek or contemporary with Homer’s time (its origin is Anglo-Saxon), but it makes associations with creative writing easy. Some of us have spent long hours in workshops tending to our craft. Well, Odysseus’ craft is smashed to bits by a massive breaker, but he manages to straddle a broken plank, “riding it like a plunging racehorse,” as he ties the veil around himself before plunging into the brine.

This is a moment that fascinates me–Odysseus steadied by a broken piece of human construction (he built the boat himself on Calypso’s island), accepting a mysterious gift from the gods in order to survive. It’s an accurate metaphor for the poetic practice. Craft alone is not enough. You can spend years learning the nuances of language, verse, conceits, and the forms of poetry–and you must–but all that will give you is technique. Insight, wisdom, wit, vision…those come from somewhere else.

I’m no mystic, but I believe that forces outside the conscious self help to direct my work as a poet. I don’t mean Zeus or Jesus or Virgil’s ghost, who have all been important to the creative lives of other writers. Rather, I mean an elusive, uncanny intelligence that seems both a part of me as well as foreign. Maybe it’s just my subconscious. Maybe it’s too much bourbon. Whatever the case, I’ve come to rely on that voice, and like Odysseus I’m sometimes a little suspicious of its motives, but I’m rescued by it again and again.

To take this in a less spooky direction, as a reader I have a similar sensation when encountering certain poets. The first poem that ever really resonated with me was T.S. Eliot’s “The Love Song of J. Alfred Prufrock.” Prufrock’s crisis, his loneliness and ineffectuality, felt like my own. Reading the poem, I experienced an ambivalence peculiar to art: the awareness of vulnerability and the simultaneous feeling that the poem was saving me from the threat it describes. That voice in the poem, traveling from a place far beyond the self, had arrived to offer some comfort and protection, if only briefly.

I wonder if poetry isn’t fundamentally an attempt at rescue, a lifeline thrown out into the squall. Perhaps it’s the willingness to be rescued, too.

This is Peter’s fourth post for Get Behind the Plough.