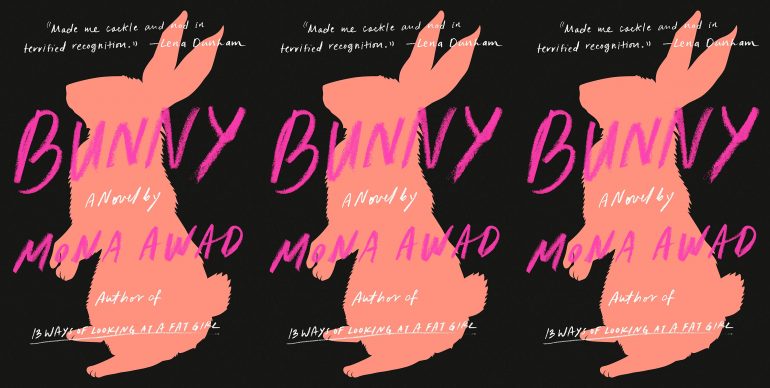 In Mona Awad’s new book, Bunny, the prestigious MFA Writing Program at Warren College has accepted its first all-women cohort, and four of the five students get along so well that it’s hard to tell them apart. They insist on calling each other “Bunny.” The fifth, Samantha Heather Mackey, can’t stand the Bunnies, but she can’t say no when they invite her to their weekly “Smut Salon.” She imagines the meeting will be as insufferable as their stunted and self-congratulatory writing workshops, but at the Smut Salon, the Bunnies turn actual rabbits into men, which they call their Drafts. The Bunny-boys lack human hands and self-awareness, repeating only the same senseless compliments. They are sexless drones that never satisfy their makers. What does any writer do to a darling that doesn’t make the cut? Kill it. With an axe, preferably.

The Bunnies go through a lot of Drafts. There is a lot of blood. Their ritual is an engaging  metaphor for the emotional investment artists place in their work and the brazen disregard of an artist working with blinders on. Awad expertly balances the horror of the ritual with her acerbic humor. Dismayed by the Frankenstein Bunny-boy creations, Samantha muses, “If you never even touch hand flesh, let alone fuck? Isn’t that more of a Disney ride than a date?” The novel quickly ascends to a Heathers level of camp without losing its grip on emotional reality. Sure, they’re turning bunnies into half-men, but the struggle, shame, and frustration of making art rings true.

When it’s Samantha’s turn to summon her own Bunny-boy, she fails. She’s spent the whole semester blocked, and this failure in front of her peers is catastrophic. Her brief stint with the Bunnies ends in disgrace. She returns to their regularly scheduled school-sanctioned workshop, her failure the night before “as unspeakable as money or a fart.” The drama, however, is far from over, with half the book remaining. The story only gets weirder, thriving in suspense and surreal confusion.

Bunny could’ve been a bitter account of a wounded MFA grad’s slights and gripes, but the surreal and supernatural turns make it more enjoyable, insightful, and honest than an anti-academia screed. Scenes with the Bunnies and their horrific creations are more engaging than the novel’s moments of mundane life; Samantha’s aloof mentor, “The Lion,” with whom she had an emotional-fling, and the nice poet boy who has a crush on her, present low stakes compared to the drama of the Bunny-boys and their butchers. Awad’s leap into the unreal, on the other hand, summons new life to the familiar woes of academia and art making.

Samantha is the only person in her cohort who’s ever struggled to make ends meet, and her peers’ privileged pasts paint a portrait of academic exclusivity not limited to fiction; too often the only people afforded the resources to make art are those wealthy enough to be boring for a living. Awad does not hold back in her assessment of the stagnation and self-indulgence swamping academia. The Bunnies’ “proems” and vignettes are dark and muddled musings dressed up as cerebral storytelling. Awad mostly spares readers from slogging through the Bunnies’ actual work, but anyone with a cursory knowledge of elitist academic spaces will know the type on sight.

In many ways, Bunny is a book made for English majors, rife with literary references and fairytale homages, but Awad strikes a careful balance: those who pick up her references will appreciate them, and those who don’t won’t miss out on the story. Furthermore, Awad’s prose is compulsively readable, and Samantha’s voice sticks in one’s head. Who else could describe so succinctly the buoyant repulsiveness of their antagonists’ skin as “glowing with health insurance,” or having the “Gossip Glow…the flushed look that comes from throwing another woman under the bus”?

The Bunnies want so badly to be brave with their writing, but when their creations tumble out of their rituals and into real life half-formed and incoherent, they must reckon with the rage, jealousy, and pettiness that fuels them. It’s a tough lesson to face—to get your hands so dirty making something you know you’ll have to destroy. But maybe, just maybe, this next Draft will come out the way you want. Samantha’s struggle is particularly poignant; tangled in the Bunnies’ world, she takes an axe to her own life, and there’s no spell she can cast to bring it back. With this book, no axe or spell is needed: whatever ritual Awad did, Bunny came out just right.