Home
»
Reading
»
Can’t Get It Out Of My Head: Songs in Janet Frame’s Early Fiction 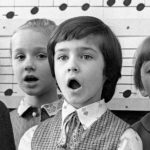 A good song is catchy: it’s quickly learned, and easily retained. It may be hard to forget, to the point of distraction. There’s a reason that the first literature was found in verse, in melodic and rhythmic patterns. Leaning down to a baby, a parent’s voice pitches high-low, high-low. Sing-song, barely words at all, just pitch and rhythm repeated over and over again. Patty-cake, patty-cake makes way for “A-B-C-D-E-F-G…,” and “Happy birthday to you…,” followed by “My country t’is of thee…”; “Shall we gather at the river, the beautiful, the beautiful river…”

New Zealand author Janet Frame (1924-2004) is known for her use of imagery, bright as the pictures of a child’s book, but less attention has been given to the fragmented songs within her stories. Her first published novel, Owls Do Cry (1957, reissued by Devault-Graves Digital Editions earlier this year), opens with “birds beginning and the wren in a cloud piping like the child in the poem, drop thy pipe, thy happy pipe” (this last taken from William Blake’s “Songs of Innocence”), and the “who-dunnit, who-dunnit” of the summer thrush. Which is to say, even before this dream-like chapter’s close, “Sings Daphne from the dead room,” the book has opened with song.

Recognizing the lyrics of a song isn’t merely reading words on a page, but remembering melody, tune, even the supporting instrumental arrangement. When the narrator’s grandmother sings, “—Carry me back to ole Virginny, there’s where the cotton an’ the corn an’ taters grow…” the words carry sensory and emotional associations not found on the page. Being reminded of a song is to take it in whole, a lozenge that dissolves slowly on the tongue, with whatever complicated sweetness it may hold. Even as the rest of the reader’s attention moves on with the narrative, the lilt of the song remains embedded in the ear. Frame’s characters who remain closer to childish playfulness (and helplessness) are more likely to come onto the page through fragmented songs, quicker to notice the sounds of song around them. Characters who are tied more tightly to social norms, on the other hand, don’t tend to register songs except in the occasional dream. The girl who was once known as Chicks (“Teresa now”) has grown into a responsible mother and wife. She plays symphonies on the stereo, selecting music to impress. Her only song, “a child’s song we had at school,” comes in a dream, which frightens her.

This closeness between song and childishness, or even madness, is not original to Frame of course. Consider Shakespeare’s Ophelia, singing songs of her own devising: “How should I your true love know/From another one?/By his cockle hat and staff,/And his sandal shoon.”

Popular songs and hymns both serve the same purpose in these texts: to carry the reader into the setting in a visceral, memory-driven way. Like any sensory element, song evokes a deeply personal response. The German term Ohrwurm conveys the deeply individual response of a song that catches hold of the listener and won’t loosen its grip. The word translates “ear-worm”, conjuring the lurid image of a burrowing form piercing individual skin, a parasite carrying infection from the outside in. It’s certainly not academic, nothing cognitive about this conveyance. The reader is helpless—unless the tune passes unrecognized, in which case the words may be nearly meaningless.

In Frame’s second book, Faces in the Water (1961), patients in the psychiatric hospital’s Ward Two hold “church” where they sing with tuneless enthusiasm: “Shall we gather at the river…” A reader who’s privy to the cultural signs will recognize the words of a hymn; the reader may even be unable to read these words absent their familiar melody once they fall into place as song lyrics rather than just words. The reader receives the song—lyrics, melody, and rhythm—into her own body whole, passed like a parasite from one to another. The reader who’s shared this communion will be unable to prevent this song from being carried into the auditory process of her reading. While the narrative continues, the song restlessly carries itself throughout the course of the reader’s journey. But the reader who doesn’t recognize the song is immune to these effects, and will read these words only as words, if perhaps as poetry.

Writers are often cautioned not to rely upon references to shared culture, because contemporary readership is drawn from many cultural traditions. Songs—like slang, jargon, fashion details, pop culture references—won’t be understood by all readers in the same way. But isn’t that partially the point? A song signals one group member to another, evoking a common bond. Patriotic anthems rely on this; so, of course, do religious hymns. But so too do most sensory elements of setting, from the oily smells of a city street to the hush of a classroom, the clatter of an industrial kitchen to the buzz of a hummingbird’s wings.

Still, whenever some people know the same sounds, smells, or songs, others are excluded. When “Sister Honey” hosts sing-a-longs at the psychiatric hospital (in Faces in the Water) she urges everyone to sing, but there are no songbooks present, meaning only those who’ve already learned the songs are being invited to sing. But alongside hymns, “When Irish Eyes are Smiling” is one of Sister Honey’s standards: this song is one way in which one group asserts a common heritage, disavowing others. When a reader “hears” the song within the context of the novel, she is either drawn in as firmly as those within the activity room of the psychiatric ward, or experiences the exclusion of those who aren’t part of the group.

Evoking common memory is a powerful rhetorical device, even in a culture that cherishes individuality. In Frame’s novels, even the opportunity to sing together is a form of privilege. In Frame’s psychiatric hospital, patients in the more controlled Ward Seven don’t sing together. Some don’t speak English, the common language; others don’t speak at all. One woman in the ward sings romantic songs of midcentury post-colonial New Zealand, but only—“happily”—to herself. She’s the only character in this book to sing in a language other than English, crooning a traditional New Zealand love song, “Po kare kare ana.” She’s also dead by the end of this chapter.

Tags:Faces In The Water, Janet Frame, Owls Do Cry