Home
»
Uncategorized
»
Can’t See the Forest OR the Trees

There’s a standard piece of writing advice—I believe it’s in the Official Fiction Handbook right between #135, Don’t relate dreams, and #137, Stop describing fluorescent lights already – that goes, There’s no such thing as a tree. By which is meant, your character can’t drive through a tunnel of trees. She has to drive through a tunnel of elms. I’ve always assumed the rule is meant as an example of how we’re meant to be specific at every opportunity: not a cup, but a clay mug; not a sandwich, but a BLT on rye with frilly toothpicks; not a dog, but a shih tzu.

I’m pretty good on dogs. I’m excellent on sandwiches. What I’m terrible at is trees. 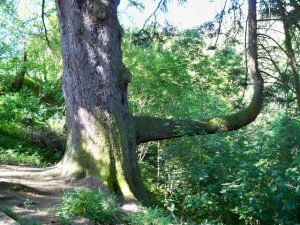 I had every opportunity to learn. I grew up in a heavily wooded town. My back yard abutted a nature preserve. Science teachers took us on hikes in the ravine. I was a full-fledged Girl Scout.

The problem was that I didn’t get glasses till the summer before college. On the ride home from the optometrist’s, I realized, with all the wonder of a philosophy major on an LSD trip, that there were individual leaves on the trees. Leaves! On the trees! I’d known it in theory, but until that point all trees had looked to me like a child’s drawing: a green, fuzzy ball on a brown stick. And so I’d grown up with the impression that there were basically two kinds of trees. You know: Christmas trees and regular trees.

But my revelation came too late. By the time I had the glasses, I was more interested in other distinctions: Nietzsche versus Kant, fraternity boys versus theater boys, vodka versus gin. And although I was willing to do anything to become a writer, I didn’t see why I needed to study botany. I’d always associated an awareness of nature with essayists and poets. At a writer’s conference, a friend and I started counting how many poems in the public readings mentioned birds. (Answer: about 85%, until I had to ban myself from poetry readings because I couldn’t control my juvenile giggling whenever some poor poet mentioned a wren.) 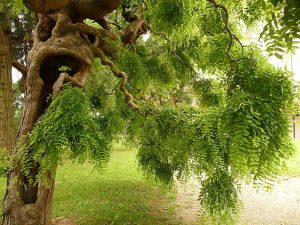 My ignorance shouldn’t have mattered, but it did. I recently unearthed a story I wrote at seventeen in which a rich and important businessman sits at a fancy “hickory desk.” Although I still can’t point out a hickory tree in the forest, I do at least understand now that hickory is a rough and rustic wood best used for hammer handles. That I might as well have made my businessman hold a board meeting in a Cracker Barrel.

In my twenties, I decided to educate myself. It had to do, in part, with teaching Montessori for several years, and getting schooled by my students on nature walks. It also had to do with reading, with seeing the impact a well-placed tree (archetypal! primeval! life-giving!) can have on narrative. Consider the pear tree in Their Eyes Were Watching God, Julia Alvarez’s guavas, the catalpas in Robb Forman Dew’s The Evidence Against Her. Here was another way to flesh out each fictional universe. Why settle for a fuzzy green background when you can order up a stand of poplars?

Despite my best efforts, I can still only identify a handful of trees. Oak, maple, cedar, birch, 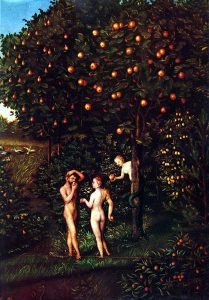 weeping willow, ginkgo. Apple trees, but only when there are big, obvious apples hanging off the branches. What I can do is Google the hell out of, say, magnolia trees, before I put them in a story. Diana Wells’s book Lives of the Trees was a revelation: all the lore, all the uses and mythology and weird facts and literary allusions, and none of the didactic leaf-identification rubrics. When I realized my forthcoming novel would be about an old mansion and its grounds (it also features—I swear this makes sense in context—haunted acorns), I knew better than to ignore the grounds. I mapped out not just the rooms of the house, but the gardens, the groves of trees, the hedges. I researched what would be blooming, and made sure my acorns pelted the roof in the right season.

That said, I still often ignore the “no trees” advice. Some of my characters, after all, are like me: more interested in politics and love triangles and sandwiches than in bark texture. But then some of my characters are smarter than me. Thank God. 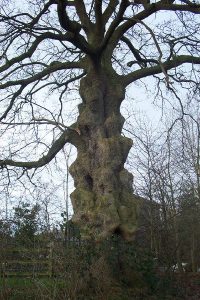 Which brings me back to that Official Fiction Handbook, and its blasted first rule, the one we spend our lives decoding: Write what you know. It’s advice I’ve rarely followed, sometimes to my detriment. Here’s the rule I need instead, the one I ought to paint on my wall. (Because who knows what other hickory desks are lurking in my fiction? What other tragically flubbed details, what missed opportunities for devastating specificity?) Rule #1, revised: What you don’t know, learn. Put your frickin’ glasses on.