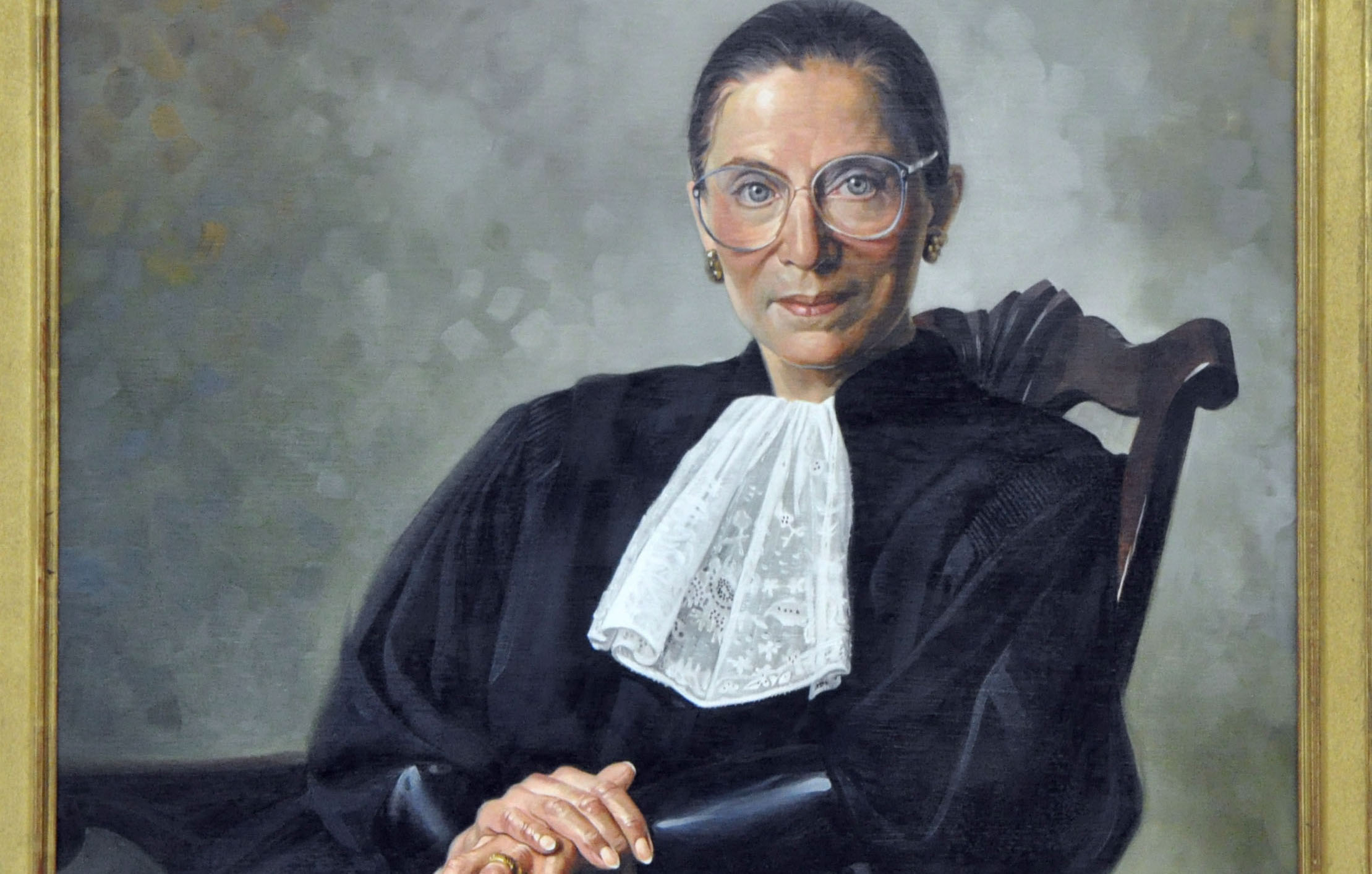 One of my favorite little known facts about Supreme Court Justice Ruth Bader Ginsburg is that she was a student in Vladimir Nabokov’s European Literature class at Cornell when she was an undergraduate in the 1950s.

“He was magnetically engaging,” Ginsburg told the magazine Culture Trip earlier this year. “He stood alone, not comparable to any other lecturer.” In addition to being a brilliant novelist, Nabokov was also known as an inspiring professor. In 1989, actor Christopher Plummer portrayed the author lecturing about Kafka for PBS.

In his famous lectures, Nabokov stressed the careful selection of the perfect words, but also taught his students that style “is not a tool, it is not a method, it is not a choice of words alone. Being much more than all this, style constitutes an intrinsic component or characteristic of the author’s personality.”

Ginsburg has said that Nabokov greatly influenced her legal writing: “I seek the right word and word order,” she explained. “And I use the ‘read aloud’ test to check whether I have succeeded.”

Known as “Notorious RBG” by her admirers for her principled stand on civil rights and women’s issues, Ginsburg takes her legal writing seriously. My Own Words is a new collection of Ginsburg’s lectures and writings on everything from women’s rights to opera and the law. Edited by two Georgetown law professors, Mary Hartnett and Wendy Williams, it’s a fascinating collection of Ginsburg’s writings—briefs, articles, speeches, lectures, and bench announcements spanning her life and career.

Included in the book is a talk she gave called “Speaking in a Judicial Voice,” that discusses the importance of clear and compelling judicial prose. Ginsburg says she tries to write her “few separate opinions each year as I once did briefs for appellees—as affirmative statements of my reasons, drafted before receiving the court’s opinions, and later adjusted, as needed to meet the majority’s presentation.”

Nabokov’s influence is seen in many of Ginsburg’s writings. For example, in her briefs and other writings regarding women’s rights, she prefers to use the phrase “gender discrimination” instead of “sex discrimination.” She made the change after her secretary pointed out that using the word “sex” so much in her briefs might not have the effect on the all-male justices she was hoping for. She made the change to focus on the issue.

Nabokov’s read-aloud test is an important element of Ginsburg’s judicial writing. Because rulings and dissenting opinions are first read aloud in court before being distributed to the public, it’s essential that the language be clear enough to articulate legal arguments but still be understood by ordinary citizens.

“There are constraints,” Ginsburg told Culture Trip when asked about how legal writing differs from other written work. “For example, an appellate judge can’t look outside the record of the case as it played out in the first and second instances. And we must save the reader from uncertainty about what the court ruled and why. No double entendres or mysteries.”

Ginsburg’s dissent in Ledbetter v. Goodyear Tire and Rubber Company, also known as the Lilly Ledbetter case, is one of the most famous dissents the low-key Ginsburg has read from the bench. Ledbetter was a Goodyear employee who had been paid less than her male coworkers. The Court ruled Ledbetter could not sue for more than a few years of back pay due to the statute of limitations.

Her opinion in the case was long and detailed. But she knew airtight legal arguments alone would not be enough. In his New Yorker profile of her, “Heavyweight,” Jeffrey Toobin writes that she knew that for her opinion to have a real impact, she needed to do more.

“She knew that there was only one way to draw attention to the injustice done to Ledbetter, and dense legal analysis was not it,” Toobin wrote. “When Justices want to call attention to their protests, they read their dissents from the bench. Ginsburg typically did this less than once a year. But in the Ledbetter case she did something even more unusual. For the dissent that she read from the bench, she rewrote her opinion in colloquial terms.”

Reading from the bench, Ginsburg clearly identified what she felt was the primary problem with the Court’s decision before moving on to her legal rationale: “Pay disparities, of the kind Ledbetter experienced, have a closer kinship to hostile work environment claims than to charges of a single episode of discrimination . . . . Yet, each and every pay decision she did not immediately challenge wiped the slate clean.” She concluded her dissent with a clear and simple statement: “The ball is in Congress’s court.”

Her use of language is clear and direct. She redefines the issue and makes her argument. She calls on those who agree with her to push for change. She did not call on Congress directly, use inflammatory language, or rhetorical flourishes. She chose her words carefully to make sure there was no misunderstanding her call for action.

While the late justice Antonin Scalia delighted in writing opinions filled with pithy sentences and clever wordplay intended to drive home his legal arguments, Ginsburg, following her English professor’s advice, preferred to choose her words carefully and for maximum impact. In her now-famous dissent in Shelby County v. Holder, the case that shredded part of the 1965 Voting Rights Act (VRA), she uses simple, but vivid language to illustrate her opinion. “Throwing out preclearance when it has worked and is continuing to work to stop discriminatory changes is like throwing away your umbrella in a rainstorm because you are not getting wet.” The analogy is clear, simple, and powerful. The image of using an umbrella in a rainstorm perfectly describes how the Voting Rights Act protected citizens in parts of the country where discrimination has prevented more than one minority group from voting. Easily visualized and easily remembered, it crystallizes Ginsburg’s dissent and sets the stage for the legal arguments that follow.

Nabokov spoke at length about writing in an interview with the Paris Review in 1967. Looking back over his teaching years at Cornell, one of the hallmarks of Nabokov’s Cornell lectures was his belief that style and plot worked hand in hand to tell a story. He would probably be pleased to see that one of his students took his lectures to heart and became one of the most important jurists of her generation.

This piece was originally published on December 2, 2016.