Home
»
Reading
»
“Changes of Scale by which We Measure Ourselves Anew”: the Appeal of Tiny Objects and Compact Forms 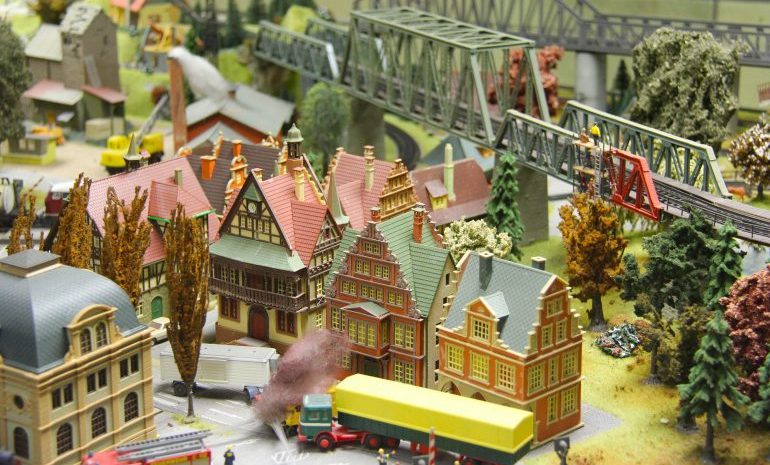 I’m drawn to tiny things. In the Matchstick Marvels museum in Gladbrook, IA, I was captivated by a model of Hogwarts, an elaborate many-towered and turreted castle made of more than 600,000 matchsticks.

At Dinky’s Diner in Reeds Spring, MO, my family used to stop for miniature hot dogs, tacos, and chicken legs.

In Cavendish, PEI, Canada, I stumbled upon a little sand castle town, including a Notre Dame made out of sand, complete with gothic arches, sloped roofs, flying buttresses, spire, gargoyles, and chimera.

My daughter and I wandered off from the majestic gardens and walkways of Powerscourt Estate in County Wicklow, Ireland, to admire an antique dollhouse with hand-painted ceilings, wood and marble floors, miniature books in the library, and a solid gold mini violin in its own rosewood case.

Larger-than-life things—like, say, an enormous roll of toilet paper sculpture outside of the “world’s second best public bathroom” in Lucas, KS, and a cool mosaic in the sidewalk of what it looks like when you flush a toilet—can make me see the elegance of a toilet paper roll and the swirling of water in a whole new way.

It’s those tiny things that fire my imagination. Maybe, sort of like the way we’re hardwired to coo at puppies, we’re also drawn to small cute things—like adorable little tobasco bottles; or a 12-foot scale model of the US Capitol made of matchsticks; or the Lord’s Prayer carved on the head of a pin; or the The World’s Largest Collection of the World’s Smallest Replicas of the World’s Largest Things, (also Lucas, KS), includes items like the world’s smallest replica of the world’s largest underwear.

As a child, I was entranced by miniature worlds in literature—by the Borrowers, the Littles with their soup can elevator and matchstick torches, and Beverly Cleary’s Ralph S. Mouse series, my favorites. Young Ralph ventures into the world outside of his hotel room mousehole in The Mouse and the Motorcycle “looking for speed and excitement.” Finding a toy motorcycle—one that I pictured as like one of my brother’s tiny detailed Matchbox cars—he is thrilled by the

pair of chromium mufflers and the engine and the hand clutch. It even had a little license plate so it would be legal to ride it . . . It looked too perfect with its wire spokes in its wheels and its pair of shiny chromium exhaust pipes.

And given a chance to ride the toy motorcycle, his “heart skipped a beat like a motor missing on one cylinder.”

Our understanding of the potential profundity of the tiny has evolved significantly since Jane Austen famously compared her own work to that of a miniaturist who created portraits on small oval disks: a “little bit (two inches wide) of Ivory on which I work with so fine a Brush, as produces little effect after much labour.”

At one time, women’s work in particular was dismissed using such metaphors; writing about domestic life was seen as an act of painting on smaller canvases than those writers who recreated bigger sweeps of experience, wars and conquests. But there’s something equally impressive about the “miniaturist” who can fit so many intricate particulars into a tiny space, as Austen’s work demonstrates.

In his essay “Writing in Place” from The Rose Metal Press Field Guide to Writing Flash Nonfiction, Brett Lott compares the micro-essay to “the smallest of nesting dolls created by the author holding inside it the reader’s entire life,” ideally leading to “a burst of self-awareness that gives my readers the understanding that these few words she’s read have had hidden within them a realm far larger than any she could have imagined.”

In her essay “On Miniatures” from the same book, Lia Purpura examines the question of why tiny things, including micro-essays, are so compelling: “It’s why we linger over an infant’s fingers and toes, those astonishing replicas: we can’t quite believe they work. . . .miniatures are the familiar, reduced to unfamiliarity. Miniatures are improbable, unlikely. Causes to marvel. Surprises. Feats of engineering. Products of an obsessive detailer.”

The day after haphazardly rearranging some furniture, I return home to discover that I have inadvertently left a small house in each front window of my green-and-white house: in one window, the green and white dollhouse my dad built for me when I was seven; in the other window, a green and white house ornament.

As I enter my own house and confront my packed shelves of books, these houses within houses seem like a metaphor for what I do every day— whether reading or writing children’s stories, haiku, micro essays, domestic fiction, or sweeping epics—entering microcosmic worlds, discovering, as Purpura puts it, “changes of scale by which we measure ourselves anew.”