Whenever we read a piece of literature, we are unconsciously shouldering a burden: the burden of meaning. We function as readers by finding a way to make sense of written language. Interpretation involves not only grasping the different kinds of information communicated through individual words, sentences, and formal genres, but also the ability to use that information to construct a meaningful whole, going beyond linguistic analysis. To put it another way, meaning comes from contextual integration of data points within a larger system. Thus, within the system Moby Dick, the white whale as a symbol means a captain’s obsession (or whatever thematic element you want, really), and within the system “The Emperor of Ice Cream,” the eponymous emperor as an image means death—or so we may be told in an introductory literature class. Contextual data gathered by what we might call “close reading” leads us to our conclusions. Once we have the burden of meaning out of the way, we can safely and happily place the poem or novel aside (never to return to it again) because we have gotten its “meaning”—a stable, gem-like thing excavated from the surrounding debris.

This “process,” however, assumes that literature is a closed system in which no two-way exchange of information takes place, in which meaning is always transmitted in one direction—from active author to passive, uniform “reader.” What happens, then, when we are confronted with literature that is so alien to us, so unfamiliar that it seems to occupy a place at the very limits of language? What happens when we read something that does not seem to mean anything at all? Let us imagine, for example, that we are forced to make meaning out of something like these isolated stanzas from P. Inman’s Ocker (1982): 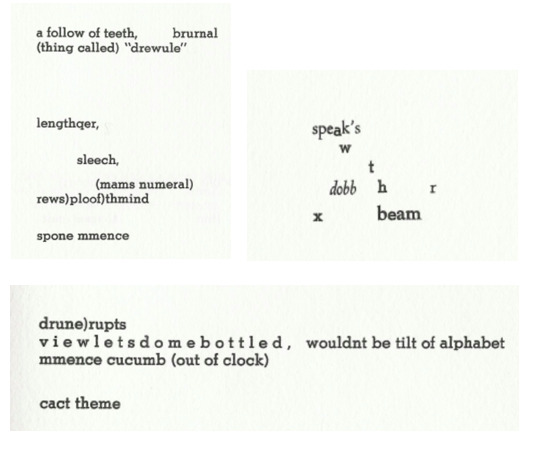 Ocker is a book of poetry that takes the form of an anti-representational system of writing—it is not interested in depicting the world through linguistic description. It is also anti-lyrical, in that it actively resists the expression of personal emotions or feelings. Visually, these stanzas appear closer to patterns of pure textual data, in which the alphabet is used as a combinatorial system. In this way, Inman’s writing seems almost non-human—and not only non-human, but non-sense.

The scholar Marnie Parsons, however, in her essay, “A More Capacious Shoulder: ‘A’-24, Nonsense, and the Burden of Meaning,” writes that “if…meaning is use, is context, then meaninglessness may rely on use and context also; if all meaning is meaningless in some other order or context, then perhaps all apparent meaninglessness is similarly meaningful elsewhere, otherly used.” I propose, then, to find a different context for understanding Ocker, in order that I might make use of these stanzas to construct a (a and not the) meaning. Ludwig Wittgenstein tells us, after all, that language is a game and we have to make up the rules as we go along. Thus to recontextualize the system, Ocker is to enter into a two-way exchange of information in which the rules of language begin to shift.

Ilya Prigogine, widely considered to be the grandfather of chaos theory, stressed that states of thermodynamic equilibrium are rare for systems. More common are states of flow or exchange of energy between systems. These Prigogine called “dissipative structures.” Dissipative structures make up those systems that have not obtained equilibrium over time (like the biological processes of life and growth). The fact that thermodynamic dissipative structures occur much more frequently than static, balanced systems challenges common assumptions that stasis is both a more natural and desirable condition than chaos. The poet Steve McCaffery, in his book Prior to Meaning: The Protosemantic and Poetics (1996), writes that there is “a broad frontier where poetics and writing systems conjoin,” and that the “quintessential disequilibrium” of the Western alphabet “can be specified as the excess of information over meaning.” In short, there are also dissipative structures within writing systems.

Ocker, as an example of a dissipative structure, does not reach an equilibrium of meaning. Rather, its meaning expands or contracts as an exchange takes place between text and reader. A reader will deploy a variety of meaning-making strategies: one may search out disparate words or images within the stuck-together assemblages of letters and punctuation (“lengthqer,” “drune)rupts”), attempt to parse the semantics of various sentence fragments (“a follow of teeth”), or graft ready-made reading practices and genres onto the poem (understandings of the conventions of line breaks or the use of white space on the page). Any meaning that a reader arrives at undergoes a double-action of convergence and dissolution of the generic, contextual, and historical meanings they bring with them to the page. This disequilibrium of meaning becomes a generative and productive force. Similar to the clinamen—the spontaneous, unpredictable deviation or swerve—that interrupts laminar flow in Lucretian particle physics and creates something new through turbulence, the simultaneous process of birth and breakdown of meaning within a writing system disrupts stasis and, in the case of Ocker, results in a poetics of turbulence.

When I approach Ocker as a system, I try to absorb the informational data on the page at a surface level through unconscious scanning, which is to say I try to scatter my attention rather than focus it. I look for loose visual patterns or rhythms throughout the overall evolution of the book and resist semantic analysis at the level of word or fragment (the system’s constitutive elements). I try to get a feel for the larger structures at work, and that means moving through the entire system to get a sense of its overall project. For example, I notice that Ocker progresses from simple levels of data organization (simple stanzas) to more complex levels of organization (complicated and informationally-dense stanzas) and back again. I notice areas of relative “calmness” in how the informational data behaves, and I notice areas of relative “agitation” in how the data behaves, and these appear to come and go in cycles. In some ways, Ocker parallels Prigogine’s theory of complex systems: simple molecules can spontaneously self-organize themselves into more complex structures when they reach a kind of maximal point of becoming.

Conversely, when I do attempt an analysis of Ocker at the level of word or fragment, I find myself instinctively clinging to the few legible and complete words that I can actually make sense of; I become frustrated when confronted with word-like objects that cause me to second-guess myself. Some of these word-like objects seem plausible enough that I briefly consider if they are in fact real words that I am not familiar with—could a “trouse” be an object? It feels like it could be, and maybe this confusion comes from the fact that I can still pronounce and speak the word “trouse” even though it apparently has no semantic meaning. Phonetically the word makes sense, and it is almost as though, by speaking it, I bring it into a kind of existence. I cannot speak words like “throatqh” or “lengthqer” because I do not (or cannot) know how to shape my mouth to produce those phonemes.

The scholar Daniel Heller-Roazen writes of “endangered phonemes” that drop away from language almost like vestigial tails as written language evolves throughout history. He compares those forgotten phonemes to endangered animals in that they exist now primarily as historical artifacts rather than functional pieces of language. “A glance at the history of writing reveals the brute fact: letters can be forcibly evicted from the scripts to which they once belonged,” he writes. Rather than a species of endangered animal, however, we might consider the word-like objects that Inman has created as a species of imaginary animal, like that of a chimera, which is composed of the incongruous parts of a lion, goat, and serpent. Inman illustrates that fragmentation occurs both by subtraction and addition to language. Words like “(,blile)” or “andn’ts,” for example, seem to be possible renditions of “bile,” “blithe,” “and not,” or “don’t.” Their meaning is indeterminate because these words have been amalgamated with extra marks. Inman almost seems to be providing a counterpoint to Heller-Roazen—letters and marks of punctuation can be just as forcibly inserted into those same scripts.

It is interesting, then, that Inman, in an essay called “Notes on slow writing,” refers to “unitary” words as points of resistance. They serve as “an interruption in the ongoing transmission” of mere data, information, noise. This description of unitary words suggests that the other word-like objects that populate Ocker are somehow multivalent or in a state of disequilibrium as opposed to unitary—they actively produce informational excess and noise. An attempt to read these words, words that are literally unspeakable and devoid of a stable semantic meaning, is an invitation to simply skim them. Inman seems to understand that a reader’s divided and rootless attention is “swept along by the trajectory of information & bytes of sensation.” The unitary word—the word that exists as a state of equilibrium between its phonetic, graphemic, and semantic structures—offers a kind of refuge from this torrent of fragmentation and informational detritus. Through a slow and deliberate approach, a reader may yield gestalt objects in multivalent words like “mmence”: word possibilities within the amalgamation slowly materialize as a foreground against a background of excess and noise, only to recede again into the undifferentiated mass. (At different times I can see the fragmented possibilities of words like “hence,” “mince,” and “once.”) But the unitary word’s sense-making structures are much more closed off to this noise and excess, and because we interpret them as sense rather than noise, they do not get swept up and away with informational excess during skimmed reading. Unitary words do not perform the spillages of language the way multivalent words do.

A desire to bring meaningful reading practices to Ocker seems indicative of how we ultimately navigate the fracture of our current postmodern lives: searching for small islands of semantic stability in an ocean of informational excess and noise. Humans derive pleasure in finding order within disorder. We seek out patterns and meaning, even when there is none to be found. And yet Ocker, through its performance of an open and chaotic writing system, calls our attention back to how heavy this burden of meaning can become.