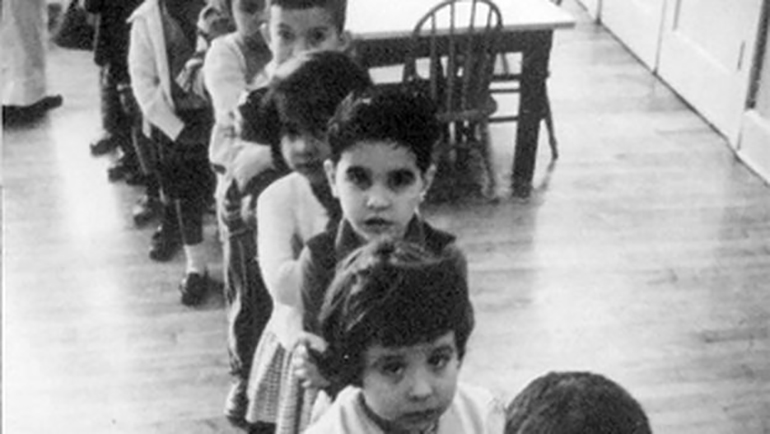 When children were being separated from their families at the border this past summer, the first person I thought of was my father. A child of exile, he was separated from his country and his family, held in camps with other children like him in Miami, all fleeing Cuba as part of Operation Pedro Pan. Between December 1960 and October 1962, around fourteen-thousand unaccompanied children arrived in the city; he migrated here on June 29, 1961. Mi abuelo had been threatened with violence. There were rumors that children were going to be sent away from their families to work in farms on the island. Mi abuelo did not want this for his son. And so, mi abuelo sent my father to the United States.

In the memoir, Waiting for Snow in Havana: Confessions of a Cuban Boy, Carlos Eire, who was also a Pedro Pan kid, writes about the “fishbowl.” The “fishbowl” was the space at the Cuban airport where children waited for their planes to come, separated from their families by a pane of glass. Eire wrote: “Imagine being on either side of that fishbowl, saying good-bye to someone you cherish, not knowing that it will be the very last time you will see them on earth.” My father remembers this moment, remembers saying goodbye, remembers not knowing when he would see his father again but holding onto the lie they told each other—that they would see each other in thirty days. He remembers the fishbowl, his father looking at him through the glass. He remembers boarding the plane and looking out the window, the last time he ever saw his homeland.

After thirty days, my father wasn’t reunited with mi abuelo. Instead, he was sent to New Mexico to live with a foster family. At the time, my father did not speak English. His foster family never learned Spanish. When in New Mexico, he remembers a photo of his mother was stained by another child. He beat the crap out of that child. When mi abuelo came to Miami, the US government wouldn’t give him custody of his son. He had to prove he could take care of a teenager in the United States. As my father would tell me over the phone, “Maybe it’s a US thing, or just a world thing, but they thought they knew what was better for me than my own father did.”

My father doesn’t like talking about these things. I am not sure what my mother and sister know and don’t know about his time in the camps. I learned most of this, only after interviewing him on the phone for a writing project I was doing a few years ago. I remember hearing his voice and jotting notes in a moleskin, wondering what his face looked like as I asked these questions. When I first started researching this essay, I talked to him on the phone some more. Again, I found myself wondering what it would be like to talk to him about this in person, what it would be like to hug him as he told me these things.

When talking to my father about what he went through, I can’t help but think of what Eire wrote in his second memoir, Learning to Die in Miami: Confessions of a Refugee Boy:

Fourteen thousand and sixty-four boys and girls, some as young as three years old, were shipped off to the United States by desperate parents, warehoused out of sight, redistributed at lightning speed, scattered to the four winds. To me, this seemed normal. It’s what nearly all of my childhood friends were going through too. It seemed so commonplace that it took me twenty years to come to grips with its monstrous abnormality, the questions I should have asked at the time, and the rage I had to bury deep inside.

The program that was run by the Catholic Church in order to “help” the children and families negatively affected by the Cuban Revolution. While Operation Pedro Pan may have ended during the Cuban Missile Crisis, the trauma the children had to deal with, of being separated from their families and country, remained. Even if little of this is understood outside of Miami, there is enough known that we shouldn’t let this happen, much less force it to happen, again.

When I was last in Cuba, some friends from the island asked me about my father’s Pedro Pan experience. They were curious, hearing stories different from what we hear in Miami as to what happened, and why. Over there, everyone calls them “Peter Pan” kids. Both countries using the other’s language when discussing the traumatic event. Both countries trying to push ownership onto the other. To keep the pain caused at a distance.

When in La Habana I met up with a dear friend’s parents. They live blocks away from where my father and mi abuelo lived. My friend’s father was almost a Pedro Pan kid himself. But unlike my father, he was never sent off the island. I remember telling him that my father’s mother had died on the island before the decision to send him away. He told me that was the difference between them. For Cuban mothers never let their children go. If mi abuelo had been alive, they’d be neighbors.

In “Reunited but traumatized: Salvadoran family split up at border seeks recovery,” published by The Guardian, reporter Sarah Kinosian follows a man, Arnovis Guidos Portillo, as he tries to get his six-year-old daughter back after they were separated at the US-Mexico border. Portillo was told by US government officials that the only way the two would be reunited was to sign off on his own deportation to his native El Salvador. Portillo was sent back to El Salvador, but his daughter, Meybelín, was kept in the United States. She would be held in a camp for months.

Kinosian was with Portillo in El Salvador when he received a call from Meybelín. Portillo asked how she was doing, if she was making friends, if she had been to the doctor. When Meybelín asked her father when he was going to come get her, Kinosian writes that he had to move the phone away from his face, hold back his tears, and lie to her, for he didn’t know the answer.

Meybelín was eventually reunited with her father in El Salvador. In the article, Portillo says she cries often. Any time he leaves to run errands, she panics, worried that he will not return. I remember my father saying he feared that he’d grow so much, change so much, that he was afraid that mi abuelo would not even recognize him.

Every time I go back home, I make it a point to have a drink with my old man. We will walk outside in the backyard of his house and have a rum. Maybe I’ll smoke a cigarillo to keep my hands busy, to prevent myself from drinking the rum too fast, as we pace, look up at the stars and talk.

Every time I leave home, my father hugs me goodbye. He holds me like it may be the last time. Like if this is our last goodbye, it has to be one that is good enough to keep us warm in the other’s absence.

I think of the look he gives me during those goodbyes, and how they may mimic the one his father gave him when he left. I wonder if my look is familiar to him, reminiscent of his own face or that of his late father’s. I wonder how often our goodbyes bring back the pain.

As Eire wrote in Learning to Die in Miami, “We were only Cubans, after all, aliens from an exotic location that most Americans couldn’t even locate on a map. Who would want to read about us back then, in 1962? Nothing would change later, either: To this day, hardly anyone in the world knows that all of this happened.”

The US government opened camps this year right next to where my father and so many other children of the Cuban revolution were held, a fact that affected my father and every other Pedro Pan kid I know. The Pedro Pan kids never grew out of that pain. There has to be another way for this country to treat these children. There has to be an answer to asylum that doesn’t inflict this amount of pain.