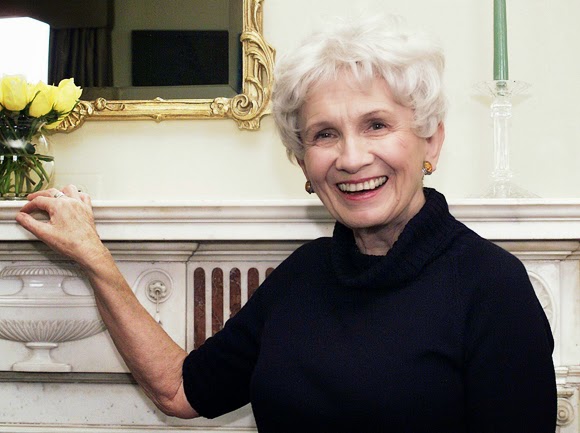 Like many of Alice Munro’s stories, her Christmas stories are occupied with work and explore the subtleties of how work defines identity. Of the three stories I’ll discuss, “The Turkey Season” (1980) is the most explicitly about Christmas, ending with a snowy tableau on Christmas Eve. But the major function of Christmas in the narrative is to create demand for Christmas turkeys, which creates the need for turkey gutters, providing the narrator—a girl of fourteen—with her first job.

Inside the Turkey Barn, she learns about how people in her town are categorized—and what it means when people don’t fit into any of the accepted categories. Although she’s from the place, a small town in Ontario, she already knows she doesn’t fit in:

Work, to everybody I knew, meant doing things I was no good at doing, and work was what people prided themselves on and measured each other by. (It goes without saying that the things I was good at, like schoolwork, were suspect or held in plain contempt.)

This awareness, and her father’s belief that she’s “got ten thumbs,” make her determined to prove she can do it. Unlike the other employees, she doesn’t have to take the job. It’s dirty work; the process of gutting is demonstrated by the foreman, Herb.

He slit the bird at its bottom end, letting out a rotten smell.
“Are you educated?”
I did not know what to say.
“What’s that smell?”
“Hydrogen sulfide.”
“Educated,” said Herb, sighing.

Right away, she learns that education is a liability at the Turkey Barn. The best gutters are Lily and Marjorie, middle-aged sisters who are uneducated—coarse, friendly, and judgmental. They’re hardest on Gladys, the owner’s sister who lived for a time in Toronto and worked as a bank teller. The narrator describes her as genteel. The sisters tease her and spread rumors about a nervous breakdown and romantic interests—punishment for her differences. Gladys doesn’t fit in, but she’s categorizable as a person who tried to leave and returned in defeat.

Herb is different. The narrator admires him for his calm, kind command. He’s uneducated but intelligent, and there’s the sense that he could have gone further with different opportunities. Everyone wonders: “How can a man want so little? No wife, no family, no house.” He doesn’t conform to their expectations of what men are.

There wasn’t any idea then—at least in Logan, Ontario, in the late forties—about homosexuality’s going beyond very narrow confines. … There were homosexuals in town, and we knew who they were: an elegant, light-voiced, wavy-haired paperhanger who called himself an interior decorator … Once the label was fixed, there was a good deal of tolerance for these people, and their talents for decorating, for crocheting, and music were appreciated—especially by women. …
… I don’t want to go into the question of whether Herb was homosexual or not, because the definition is of no use to me. I think that probably he was, but maybe he was not. (Even considering what happened later, I think that.) He is not a puzzle so arbitrarily solved.

Herb presents as masculine and is kind to women without making advances on them. In that place, in that time, he can’t be categorized. The narrator is beginning to realize she won’t fit in much longer in her community, and it’s perhaps because of this that she thinks back on Herb throughout her life.

Lily and Rosemary include and protect her. They regale her with shockingly violent stories of their childhood, and—good-natured as they are—they’re repeating the pattern. “When Marjorie’s son wet the bed she threatened to cut off his dingy with the butcher knife. That cured him.” The narrator admires their skill at work but is enraged by their casual acceptance of such brutality. “How could these women’s hands be so gifted, so delicate and clever…and their thinking so slap-dash, clumsy, infuriating?”

At the end of the story, they step out of the Turkey Barn into the snow.

Lily said it was like a Christmas card, and so it was, with the snow whirling around the street lights in town and around the colored lights people had put up outside their doorways. …Marjorie and Lily linked arms with me as if we were old comrades.

They sing Christmas carols on the walk home. She can be their comrade for now because she’s young and hasn’t completed her education and has hidden her interests. But her desire for more rigorous thinking will take her away from them and from her community. Rosemary and Lily wouldn’t like the educated adult version of the narrator. Like Gladys and Herb, she’ll stop making sense in her hometown.

An earlier story, “Boys and Girls,” (1964) begins with an occupation that’s the reverse of turkey gutting. The narrator’s father is a fox farmer. He raises silver foxes and sells their pelts.

For several weeks before Christmas, my father worked after supper in the cellar of our house. … My father removed the pelt inside-out from the body of the fox, which looked surprisingly small, mean, and rat-like, deprived of its arrogant weight of fur. The naked, slippery bodies were collected in a sack and buried in the dump. One time the hired man, Henry Bailey, had taken a swipe at me with this sack, saying, “Christmas present!” … After the pelt had been stretched inside-out on a long board my father scraped away delicately, removing the little clotted webs of blood vessels, the bubbles of fat; the smell of blood and animal fat, with the strong primitive odour of the fox itself, penetrated all parts of the house. I found it reassuringly seasonal, like the smell of oranges and pine needles.

The fact that the slaughter and skinning happens around Christmas is determined by biology, but the narrator forever associates it with the holiday. As in “The Turkey Season,” there is some connection of Christmas to demand for the fruits of the family’s labor, though it’s not as direct. The pelts are turned into luxury items the family couldn’t possibly afford, bought by people who wouldn’t dream of doing this sort of bloody, physically demanding work. It’s likely that many furs are given as Christmas gifts.

“Boys and Girls” is also about categories and conforming to expectations, though in this case the focus is on gender. The narrator is even younger than the narrator of “The Turkey Season”—only eleven, on the cusp of puberty. Although the story begins with Christmas, most of the action takes place in the spring. The narrator helps her father care for the foxes. Her father introduces her, jokingly, to a traveling salesman as his hired hand. “I thought it was only a girl,” the salesman replies.

Her mother wants her to help more up at the house, but to the narrator “that work in the house was endless, dreary, and peculiarly depressing; work done out of doors, and in my father’s service, was ritualistically important.” The narrator is beginning to understand that as soon as her brother is old enough to help more with the foxes, she’ll be relegated to domestic work. The transition is inevitable, but it’s an impractical act of kindness and rebellion that hastens it. The narrator sets free an old horse that’s about to be slaughtered to feed the foxes. When her brother tells on her, she cries at the dinner table.

“Never mind,” my father said. He spoke with resignation, even good humour the words which absolved and dismissed me for good. “She’s only a girl,” he said.

I didn’t protest that, even in my heart. Maybe it was true.

By the end of the story, she’s been categorized definitively as a girl and is expected to live a woman’s life. Maybe it’s only because of Munro’s other work, and the general patterns of her narrators’ lives, that I assume the narrator of this story will not do domestic work on a farm forever. But this narrator has a rich, imaginative inner life that suggests she’ll change her course.

In “Queenie” (1998), the narrator is older and has a name—Chrissy. She’ll be entering Teachers’ College in the fall and travels to Toronto to get a summer job before she begins. She stays with her stepsister, Queenie, while she searches for work. She doesn’t come from a farming family, but she grew up in a small town. Her father owns a trucking company and her stepmother sells beauty products. The story seems to be set a bit later, perhaps as farming is becoming less viable and the economy is changing. (Some of these changes are alluded to in “Boys and Girls.”) Although her parents seem to have adapted, the options for education near home are still limited, and Chrissy is taking the step the narrators of the other two stories might have taken eventually.

Queenie is older than Chrissy. She was tremendously popular in school and has always seemed glamorous. She still does, but her living circumstances are shabby, and the older man she married is controlling and abusive although he has the relatively genteel job of being a piano teacher. Even in the city, opportunities are limited for those without an education. Queenie works at a movie theater. Chrissy spends much of the story looking for work, landing and then losing a job at a lunch counter, though we know her prospects will change before long.

The work in “Queenie” is different from the agrarian work of the other two stories. Chrissy and Queenie’s jobs in the urban service economy lack prestige and don’t require much education, but they’re not backbreaking or grisly like turkey gutting or fox farming. And in the city, the characters have more opportunities to spend money on luxuries, even if they can’t really afford them.

Queenie talks about her job at a movie theater in terms of the possibilities it opened up.

She had got the job a month or so before last Christmas, and she was really happy then because she had her own money at last and could buy the ingredients for a Christmas cake.

The kind of financial independence Queenie describes is slight. She finds a deal on a Christmas tree and waits until the day before Christmas to buy ornaments at the drugstore because that’s when they go on sale. She throws a Christmas party for Stan’s piano students, eager to become a hostess. The party is successful but Queenie’s happiness is brief. The Christmas cake—once a symbol of independence won through work—becomes the unlikely instrument her husband uses to subjugate her.

Munro isn’t interested in writing heartwarming, festive tales of Christmas. Christmas, too, is about work and the painful differences it highlights between her narrators and others in their communities. Chrissy is far enough along in her life and education that she’s affected mostly by Queenie’s pain. Her own salvation is in sight. A failure to fit in because of intellect is the luckiest sort of failure if the misfit has the wherewithal to strike out on her own.

Before she launches into the woeful tale of the Christmas cake, Queenie assures Chrissy she’s smart enough to be a teacher and encourages her to become one. “Teachers get paid more. They get paid more than people like me. You’ve got more independence.”