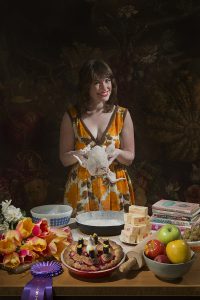 The first poetry anthology I owned was How to Eat A Poem: A Smorgasbord of Tasty and Delicious Poems for Young Readers. The title still gives me the giggles, though my amusement is perhaps more nuanced—as a kid, I delighted in the simple silliness of the concept; now, the idea of “eating” a poem seems to me a potent subversion of the establishment, a reminder that the experience of reading poetry can be at once tangible and abstract, silly and serious, nourishing of both body and mind.

For a similarly potent, subversive, and delightful reminder of the inherent deliciousness of verse, look no further than Kate Lebo, a Seattle-based poet and proprietress (or rather, proPIEtress) of Pie School, which teaches pastry-phobics the art of the perfect pie. Other manifestations of her awesomeness include A Commonplace Book of Pie; a “semi-regular semi-secret social” called Pie Stand; an in-progress “lyric grocery” of Wikipedia erasures about fruit; and these kick-ass poems in AGNI, River and Sound Review, and Best New Poets.

After the break, Lebo and I talk pies, poems, poems about pies and much, much more.

[Ploughshares] So poems. So pies. For you as a maker, what do these two genres have in common?

[Kate Lebo] I know that baking and writing both start, for me, with raw material. That’s why I like fruit pie—the fruit, the colors, the textures, the seasonality, the deadlines of rot and fridge decay, their consumability. When I’m done I get to have more, and for me hunger has always been something I experience, as I’m eating, for the thing I’m going to eat next.

In poetry, I think of material as language, of course, but more specifically as the images and observations and quotes I collect every day and let sit in my notebook. I call that my compost heap, actually.

So then when it’s time to make something, whether that’s pie or poems, I have to decide what needs to be used now, what I’m hungry for, what will be juxtaposed in the most interesting way (peaches and raspberries, this image and that bit of rhetoric), what needs to get thrown out, all with an eye towards form.

[PS] You’re also writing a cookbook. What are the demands of that form?

[KL] I keep telling myself that by mid-August 2013 I’ll know how to write a nonfiction book, and that’s cool and all because it’s also terrifying, but so exciting, and thank god I’ve chosen a form that’s measured out in little chunks. Starting this week I’m writing five recipes a week. So that seems like an easy enough task—keep writing one a day and in ten weeks I’ll have a cookbook.

[PS] What does “writing a recipe” involve, exactly?

[KL] Recipes are their own genre that must be obeyed and messed with. I’m learning about this as I go, so here’s what I know: Write everything you remember down. Then make the pie and find out everything you’ve forgotten. Then write that stuff down. Then make sure the instructions are in clear English. Make sure all the ingredients listed are actually used in the recipe narrative. (Harder than it seems!)

And then there are headnotes. The genre of the headnote. I’m still wrapping my head around that one. They’re often autobiographical (“Aunt Ruby taught me this over blah blah blah, fact about rhubarb, source material for recipe, funny personal story”). But for that same reason they’re often superfluous.

This is the thing about food writing that excites me and drives me nuts: it’s super tied to the personal essay, which is great as long as you’re a fantastic writer or famous, so we care about whatever happened between you and your Aunt Ruby. If the writing isn’t great and you aren’t Anthony Bourdain or Alice B. Toklas, it’s hard to care. It’s filler. Any jerk can get a cookbook (including me), and headnotes are, to me, where that fact is most clear.

And so of course I want to write fantastic headnotes that illuminate the origins of the pie, make the reader laugh, get them comfortable with the recipe, and don’t waste time. That’s what a headnote is for! It’s the bit of small talk that invites the reader into the conversation of the recipe, makes them feel comfortable, catches them up on what’s been said before, and then allows them to participate. Just like a good hostess.

[PS] Aha! The usefulness of the seemingly-superfluous headnote is essentially social! Speaking of usefulness and accessibility: how do these issues pertain to poetry? To pie?

[KL] Maybe the best way to answer this is to talk about why pie has been important for my poetry, beyond being its subject matter. There are two things pie taught me about poetry:

[PS] Do you think it’s possible for people to receive poems as they receive pies?

[KL] I try to create poems that walk the line between approachability and mystery, so it’s not that I’m making poems that are totally unreadable to, say, my mother—and I make pies because they’re fun and good to eat, and not just about my poor delicate ego. But yeah, I think the two types of making are symbiotic. The secret mission of A Commonplace Book of Pie is to send a cookbook buyer home with a book of poems. A poetry booby trap! They buy it for the pies and end up with this strange document that delights and surprises, I hope. And makes poetry more palatable.

Also, yes, writing about pies makes them more complex. I’m completely unsatisfied by the clichés that go with pie, but also energized by them. Pie has such a rich web of symbolism around it, and I love invoking that indirectly by baking and directly by writing about it. The cookbook will have six essays that play around with those clichés.

[PS] What are some of those pie clichés?

[KL] American as. Easy as. Sweet as. Grandma’s apron strings. She’s my cherry pie. So patriotism, ease, an innocuous traditional domestic femininity (that I work within and against all the time), matrilineal knowledge, sex.

[PS] Woah. All that stuff is…difficult as pie.

[KL] Totally! But in the end we can just have dinner and enjoy making things and share them and everyone’s invited!

[PS] Last question: who taught you to bake pie?

[KL] So many women taught me how to make pie. But making pie is also related to playing the piano, and related to sewing, sculpting, papercrafts, fimo clay, hemp, crystal beads, all the weird crafty crap I bought at Michael’s during my 90’s youth.

My mother taught me pie as a form—I don’t make her pie crust anymore. In fact, she makes mine! My grandmother can’t bake at all but she’s great at sprinkling sugar on the dough right before the pie goes in the oven. I had a pie mentor for awhile and I did a pie residency at the American Gothic House. The way I make pie is an amalgamation of countless tips and lessons and observations and things I learned by doing.

The most important advice I ever got was from my pie mentor, who said to think of pie as a practice—not like soccer practice or religious practice, but like yoga or piano or kindness. Which is to say making pie can be a lot like learning how to sit down at your kitchen table every day and write poems. If you want it to be. Which I do.