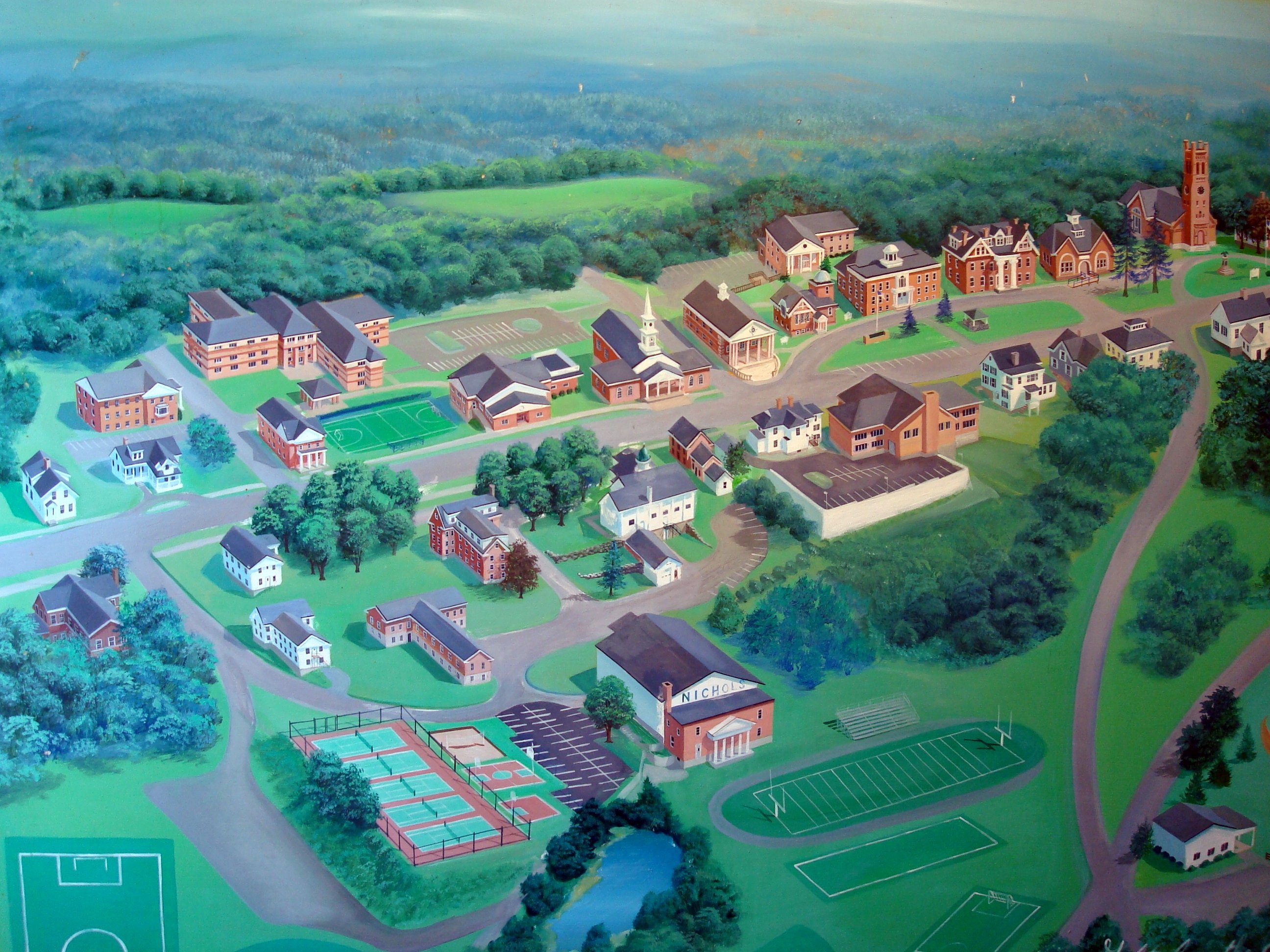 When Tibby Schlegel returns home after a visit to Oxford University in E.M. Forster’s Howards End, he tells his sisters Helen and Margaret about his time, focusing on the campus itself: “The august and mellow University, soaked with the richness of the western counties that it has served for a thousand years, appealed at once to the boy’s taste; it was the kind of thing he could understand, and he understood it all the better because it was empty. Oxford is—Oxford.” His older sisters had hoped that Tibby would become friendly with some of the young men there, likely future classmates, but he didn’t. “His Oxford remained Oxford empty, and he took into life with him, not the memory of a radiance, but the memory of a color scheme.” Readers of the novel are often invited into the narrator’s perspective, and this is no exception. Here, we know the fact that Oxford remains empty for Tibby is odd—a campus, especially a campus where you study or live or work, relies on people and compactly contained relationships to enliven the space and, well, overshadow the color schemes.

Forster’s novel isn’t concerned with campuses specifically, but it is deeply concerned with compactly contained relationships, as well as the ideas and spaces that forge these connections. The relationships at the forefront of Howards End are between the wealthy, artistic Schlegal siblings, and the wealthier, capitalist Wilcoxes. Despite their apparent ideological differences, these two families remain connected and, even more, become intertwined. The novel is set mostly in London, but it’s Howards End, a house in the English countryside that Mrs. Ruth Wilcox had inherited, that is central to the relationship between these families. The novel opens with Helen’s letters home during a visit to Howards End, as she tells Margaret about the family, their ideas, and their house: “It isn’t going to be what we expected. It is old and little, and altogether delightful—red brick.” When Margaret and Ruth become close, they clash over ideas but bond over the appeal of this delightful little house, a place the Wilcoxes own where the family can be together. Margaret, who faces losing the lease on the apartment she shares with her orphaned siblings, understands the value of such an asset. Knowing this, when Ruth dies, she leaves her family a note that she wants Margaret to have Howards End. Though her family does not honor this wish, they do remain connected to the Schlegals, and by the end of the novel, Margaret marries Henry Wilcox and moves into Howards End with members of her family, including Helen.

Zadie Smith’s On Beauty is a modern-day retelling of Howards End that explores similarly contained personal relationships with a significant update: On Beauty is, in fact, a campus novel. Smith’s work features a connected cast of characters, centered on Kiki and Howard Belsey, an art history professor at the small, prestigious Wellington College, located just outside of Boston, whose academic rival, Monty Kipps, moves down the street with his family when he joins the college as a visiting professor. The connections between the characters in Smith’s novel all radiate from Wellington, and the campus setting not only provides a contained environment and community but also heightens the stakes of the characters’ interactions. Similar to the Schlegels and the Wilcoxes, the Belsey and Kipps families are connected, even as their proximity and relationships change throughout the course of the novel. By retelling Forster’s classic as a modern-day campus novel, Smith expertly retains and updates the emphasis on connection between people, ideas, and, of course, place.

When Ruth attempts to bequeath Howards End to Margaret, she does so recognizing that the house would not only allow Margaret to keep her family together now, but would also provide the already well-off siblings stability for years, or even generations, to come. That stability, of course, is emotional as well as economic. In Smith’s retelling of the novel, the Belsey house is an inherited marker of status, but the meaning of this house is shaped by its occupants as well as its location. The family’s home is near campus; it was this proximity that made it so valuable when Kiki’s grandmother, a nurse named Lily, inherited it “from a benevolent white doctor with whom she had worked closely for twenty years.”

An inheritance on this scale changes everything for a poor family in America: it makes them middle class. And 83 Langham is a fine middle-class house, larger even than it looks on the outside, with a small pool out back, unheated and missing many of its white tiles, like a British smile. Indeed much the house is now a little shabby—but this is part of its grandeur. There is nothing nouveau riche about it. The house is ennobled by the work it has done for this family.

The building, “a fine middle-class house,” exceeds expectations: it’s “larger even than it looks on the outside.” The markers of class, however, are appropriately “a little shabby,” like the image of the pool, indicating the fact that the Belseys do not come from money. Still, the inherited house changed everything for the family—this passage remarks on the “work” that the building has done for the Belseys, and this is where its proximity to campus is key. The rental income from the property paid for Kiki’s mother’s education, as well as her own, and Kiki’s mother lived in the house and rented rooms to students after retiring and before moving to Florida and letting the Belsey family move in. By placing an inherited house in a campus neighborhood, Smith emphasizes the significance of a comfortable, owned home and updates its impact as not merely stability, but a means of emotional and economic mobility.

The house’s proximity to campus also works to evoke the confined spaces and contained social circles in the original novel. Throughout On Beauty, most of life for Howard and the rest of the Belseys is contained on campus, or at least defined by it. Howard spends Saturdays in his regular study carrel in the campus library; he agonizes over the eventual reception of his Rembrandt manuscript on his own, as well as on the phone to colleagues. Howard and Kiki socialize with other members of campus, including professors, deans, graduate students, and their partners. When the Belsey family attends events in Boston, they run into reminders of campus; even when the Belsey family travels to London, it is for the Kipps family or an academic conference, and Howard runs into colleagues. The result of this framework for the spaces the Belsey family, and Howard in particular, move in and the relationships they form is a distinct feeling of containment.

The feeling of containment, both in physical space and in society, makes the connections between the Schlegals and Wilcoxes plausible in Howards End. As the families come together, and especially as they interact with others, it becomes clear that the ideological and class differences are not as distinct as they might seem. Throughout Smith’s novel, the opposition between Howard and Monty is challenged, too, by their connection as academics—this becomes particularly clear when the academics are placed in opposition to others. In one chapter, the narrator focuses on Katie Armstrong, a brilliant freshman with a full academic scholarship who, at sixteen, is terrified by Howard’s course on seventeenth-century art. In the first few classes, she struggles to understand the lectures and consults her dictionary after sessions, but she studies the paintings attentively to prepare for the next class meeting and the reader gets her astute, thoughtful interpretations. Then, the reader gets to witness the class and, importantly, Howard’s questions: “‘What we’re trying to . . . interrogate here,’ he says, ‘is the mytheme of the artist as autonomous individual with privileged insight into the human. What is it about these texts—these images as narration—that implicitly applying for the quasi-mystical notion of genius?’” Katie, and the rest of the class, remains—understandably—silent after Howard’s question. The needlessly complicated language obfuscates Howard’s meaning and, worse, distances him from his students who, like Katie, haven’t yet learned the lingo.

This grandiose language is not exclusive to Howard. While Monty and Howard disagree, and do so fervently on politics and worldviews, they both speak like academics. Both are moderately successful scholars—Kipps is widely-known but still a visiting professor, and Howard has yet to secure tenure. The two men even study the same subject, Rembrandt, and even Howard can admit that “Monty’s Rembrandt book was, in Howard’s opinion, retrogressive, perverse, and infuriatingly essentialist, but it was neither vulgar nor stupid. It was good. Detailed and thorough.” Howard also admits that Monty’s book is also bound and distributed, whereas his is unfinished, a collection of pages scattered on the floor of his office. In the end, significantly, it’s not just academia and language that these two men have in common, it’s also a serious transgression: Monty and Howard each have sex with one of their students. In Howard’s case, it’s Monty’s daughter Vee.

Forster’s original novel also features sexual morality as a false distinction between the Schlegals and the Wilcoxes, and this culminates close to the end of the book. After months away from England, Helen returns to Howards End to retrieve books that her sister Margaret had kept in storage, and she is pregnant. Henry is appalled, because Helen isn’t married—though pages earlier it was his own history of sex outside of marriage that put a damper on Margaret’s celebrations. Ultimately, Margaret convinces Henry his views are wrong here, and the novel closes on a hopeful note as Henry resolves to leave Howards End to Margaret and finally shares with her Ruth’s wishes.

The results in Smith’s retelling are commensurately more severe. Howard is forced into a sabbatical, and Kiki insists on a separation. Howard remains in the house with the kids while Kiki moves out. In these passages toward the end of the novel, the feeling of containment is noticeably missing. Smith delicately describes the lovely small details of the house that Howard suddenly sees: the flowers closing at night, the overwhelming smell of apples coming in through an open window from the tree in the backyard, the distinct sounds each of his children makes. Howard, however, also quickly notes that this quiet, focused life in a house no longer made meaningful by the campus isn’t sustainable: “His children were grown. They would soon leave. And then the house, if it were to stay as it was, without Kiki, would be intolerable. It was in a university that he must now put all his remaining hope. Universities had been a home to him for over thirty years. He only needed one more: the final, generous institution to take him in his dotage and protect him.”

Howard here finds comfort in universities as universities, their spaces as “a home to him for over thirty years.” He puts hope in the small, contained academic community, whether at Wellington or another university, to “take him in his dotage and protect him.” For Howard, the smell of the apples and the closing of the flowers on its own isn’t enough—he’s still hoping for the compactly contained personal relationships, the intellectual exchange, to provide meaning, to provide the radiance and overshadow color scheme.