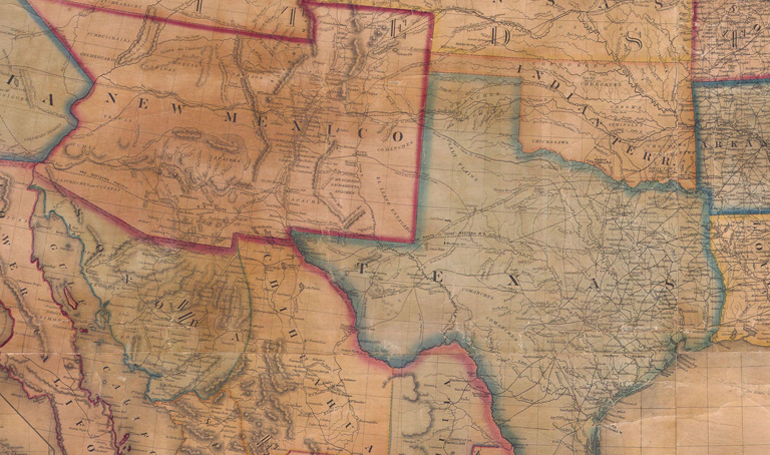 There are good reasons why Cormac McCarthy’s The Road is often cited as one of the most significant and aesthetically satisfying novels to deal with climate change. Though there is no mention of climate change per se, the novel about a man and his son struggling through the aftermath of a disaster that has put an end to civilization and transformed the earth into a planet that is hostile to life, has obvious parallels to the ecological devastation that may be upon us.

I wish to suggest that Blood Meridian, for many McCarthy’s greatest work, ought to be reconsidered as one of an eminent example of the shape the literature of climate change can take.

To many readers, this may appear to be a bewildering suggestion. The novel may be full of desolate landscapes empty of people and burning with heat, but set in the mid-nineteenth century, Blood Meridian doesn’t directly have anything to do with climate change. To claim otherwise would involve some serious juggling and critical sophistry.

Imaginative fiction does not need to substantially address any such subject to be about that subject. The Metamorphosis is not directly about Kafka’s life, but few works are as autobiographical. In the same spirit, if we take a deeper look at Blood Meridian, we find that while it may not substantially be about climate change, in its depictions of a hostile world inhabited by nonhuman forces that transcend the human subjects, it creates a sublime expression of how literature may represent our current ecological disaster.

Save for the most basic of strokes, the individuals who populate McCarthy’s novel lack dimension. Appearing like characters from an earlier, premodern literature, they settle onto the page like specters, savage, bare, lacking an inner world or psychological depth. Stripped down to appearances, his characters are overwhelmed not by their own demons or desires—as one would expect from a modern work of fiction—but by the immensity of the landscape and the language of the novel.

This thinness of the characters is contrasted by an overwhelming fatalism that seems to permeate the world, where the land and other forces loom so much larger—and are weighed with so much more significance—than the lives that inhabit them. This primal worldview, where people live at the mercy of elements, runs counter to modern sensibilities, where we are taught that characters should be independent of circumstance, possess agency, and serve as the focus of the narrative.

Blood Meridian does not move like other novels. Though Judge Holden may be one of the most memorable characters in American literature, it is not a character-driven work. Incident follows incident, and even the notorious violence can’t prop up the loose and baggy plot. Of all the elements of the novel it seems that it is the landscape that plays a primary part in shaping the work. In a spectacular fashion, passages like the one below transform the landscape into a subject imbued with almost human qualities:

They set forth in a crimson dawn where sky and earth closed in a razorous plane. Out there dark little archipelagos of cloud and the vast world of sand and scrub shearing upward into the shoreless void where those blue islands trembled and the earth grew uncertain, gravely canted and veering out through tinctures of rose and the dark beyond the dawn to the uttermost rebate of space.

Here, in this stark poetry, is the presence of greater forces that exceed mimetic representation.

The reader repeatedly gets the sense that there is some power living in the land, “as if the very sediment of things contained yet some residue of sentience.” It is a world where “a man and a rock become endowed with unguessed kinships.”

On almost every page, Blood Meridian is saturated with a sense of the uncanny, that this evil and desolate world, exceeds the bounds of human understanding. The Judge, that massive, hairless, albino half-devil, half-man, personifies and gives expression to the inescapable strangeness of the world when he speaks:

Had you not seen it all from birth and thereby bled it of its strangeness it would appear to you for what it is, a hat trick in a medicine show, a fevered dream, a trance bepopulate with chimeras having neither analogue nor precedent, an itinerant carnival, a migratory tentshow whose ultimate destination after many a pitch in many a muddled field is unspeakable and calamitous beyond reckoning.

McCarthy brings his readers into this suppressed and mysterious reality, where the moral law, our sense of what is and what should be, are engulfed by a world that is alive and pulses with a violent power greater than any human agency.

Though McCarthy’s masterwork is neither a warning nor a statement of climate change, it is an imaginative and aesthetic example of how modern fiction can look beyond the confines of characters’ internal worlds to grapple with forces beyond our control. It is in this way that Blood Meridian answers Amitav Ghosh’s argument that the literature of climate change ought to take up the nonhuman and give expression to the uncanny events that swirl beyond normal modes of comprehension. These are the parts of a reality greater than an individual can perceive; a reality deeply tied to our current ecological crisis.