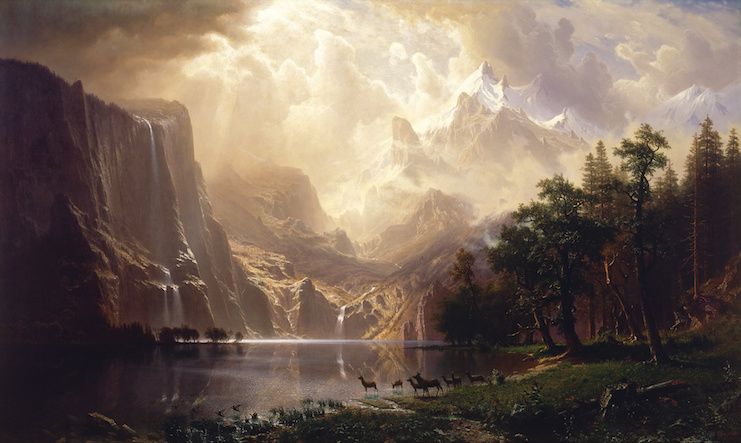 Last year, the novelist Amitav Ghosh’s book The Great Derangement caught the attention of many in the literary world. Developed from a series of lectures, Ghosh asks a question many never thought to ask: Where is the literature of climate change? Plenty of nonfiction work tackles this issue, but while millions of smart, creative individuals acknowledge that climate change represents one of the biggest challenges—and threats—of our time, novelists have typically remained silent.

It’s not uncommon to hear that much of our current political paralysis on any number of issues stems from a lack of imagination. As creatures of habit, the argument goes, we are confined to a set of procedures and expectations. We regard others and ourselves through a prism of received ideas and norms. Even novelists and other writers, who are supposed to be creatures of the imagination, have a myopic vision that prevents them from engaging with the greater possibilities that dwell in our world.

It’s this imaginative deficiency, this ideological blindness, that is at the heart of Ghosh’s intellectually adventurous work.

Ghosh argues that our underlying worldview is based on the assumption that things will remain normal. Our lives depend on a sense of regularity, that things will continue as they are. Heartache, loss, sorrow, and joy may disrupt a few days, even a month or two, but normalcy serves as a baseline to how we conduct ourselves. That life progresses through increments of change, through docile events that gradually accumulate over the course of years, is the basis of a mature or realistic understanding of the world. Though life is not inherently predictable, our contemporary way of life requires we adopt a perspective of normalcy. We need to believe one day will be like the next, that week will follow week in a more or less uniform fashion. This is the lens through which we look onto the world. We take in what is probable, but the impossible, that which defies our sense of normalcy or is outside the realm of everyday occurrences, does not make it through the thick lenses we have placed over our eyes.

As a product of its culture and its time, the modern novel does not stand apart from this worldview. From the 19th century onwards, the modern novel has grown out of a sense of what is probable. Its great subject is the everyday. The high task of the novelist’s imagination has been to give style to this humdrum reality, to elevate the ordinary. Despite a rich reservoir of domestic squabbles, sex, social injustices, psychological struggles, and a diversity of other subjects, the modern, realist novel has banished improbable events.

The insistence on what is normal, or ordinary, has blinded novelists to the uncanny forces that compromise our reality, creating an interior solipsism that is unable to engage with the strangeness of the exterior world. The result is a paucity of imagination. Though we live in the midst of an unprecedented ecological disaster, when improbable events that are part of the shift in the planet’s climate occur, they defy the literary imagination. Global warming and extreme weather appear surreal, something suitable for science fiction or disaster porn. Though the events are real, and though we may acknowledge them as real, they are still too unrealistic to be the proper subject for literary fiction. “Here, then,” Ghosh writes, “is the irony of the ‘realist’ novel: the very gesture with which it conjures up reality are actually a concealment of the real.”

The cataclysmic events brought forth by climate change, the unrecognized effects of the ecological crisis happening in all parts of the globe, may be the violence that forces us to recognize the uncanny forces that for so long have been concealed by our notions of the normal, of the everyday.

Ghosh frequently references earthly forces as though they were living beings, “a universe animated by nonhuman voices.” Such notions may be strange to our modern ears, which is the point. Ghosh wants to revive our sense of strangeness, to remind us that what we call reality is only a small bucket that has been drawn from a vast source our senses can only dimly perceive. The improbable events involving the weather may force us to recognize that humans were never alone, that we are surrounded by beings who share characteristics that we thought were uniquely human: the capacities of will, thought, and consciousness. Bold, imaginative exploration is needed to confront the reality emerging before us, to take up the uncanny forces that surround us and recognize the fact that if things continue as they are, the earth may no longer be a planet suitable for human habitation.

Though Ghosh doesn’t prescribe a specific aesthetic to cure our imaginative ills, in advocating for novelists to make the uncanny and the inhuman their subjects, Ghosh plants his flag in ground that has long been the territory of the Romantic.

Romanticism can be simply defined as a movement or desire that aims to transcend norms. Whether it’s a teenager who believes there is more than the suburb she lives in, the middle-age man who hikes in the woods to find solace from the seventy-hour workweek he has known his whole life, or the budding politician hoping to grandly overturn the rampant and normalized injustice of their society, romanticism involves a search, an attempt to grasp that which is beyond what most people assume to be normal.

A classic romantic tenet is that “realism” or “reality,” is a construct, a form of oppression that shackles the imagination. By urging writers to reach beyond the ideological constraints of the “real” and take on the unreal, the fantastic, Ghosh advocates for a literature freed from the tethers of “real life.”

As an unreformed romantic, I find this incredibly exciting. For Ghosh leaves us with a delicious paradox, that to be more realistic, to confront the current environmental catastrophe, writers must press beyond the limits of what is considered “real.” And ever since Homer sang of Odysseus’ fantastic journey, venturing into strange territories has been the bread and butter of imaginative literature.