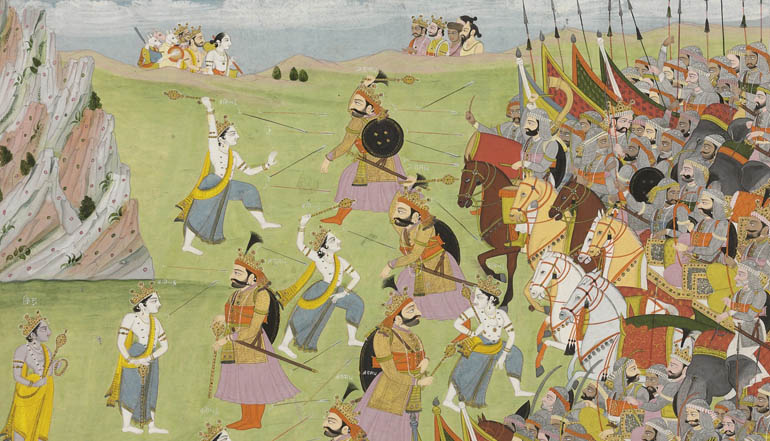 With origins dating back more than two thousand years, the Sanskrit epic, the Mahābhārata began as a collection of myths and stories that over the course of several centuries, came to be unified in a meandering and wildly digressive work roughly seven times the combined length of The Iliad and The Odyssey.

Encyclopedic in scope and form, the narrative axis on which the many subplots, sermons, philosophic interjections, and genealogies turn is the great war between the Kurus and Pāndavas, two sets of cousins who battle for control of their ancestral kingdom of Bharata. More than just a dynastic struggle, the conflict has a cosmic dimension, serving as the catastrophe that ushers in the Kali Yuga, the fourth and final age of world, one marked by discord, a decay of moral values and social chaos.

The Mahābhārata is set in a highly ordered world, where social and individual lives follow the dictates of dharma, a word which is often translated as “law,” “duty,” “virtue,” “right conduct,” but ultimately, has no equivalent word in English. Dharma is not a monolithic law or singular precept to how people are to live their lives. There are different dharmas for different castes, classes, and for different stages of life. Fluid and open-ended, one’s dharma can change with circumstances, and indeed, one of the philosophical preoccupations of the Mahābhārata is “dharma in a time of trouble,” or, to put it another way, how to stay upright when the world has turned upside down.

Here, in the fatalistic vision of a world falling apart, with fully dimensional characters struggling with questions of how to act before an inevitable catastrophe is where I believe this ancient epic might speak to those of us confronting our current environmental crisis.

The problems of climate change, of overpopulation, the acidification and death of the oceans is so overwhelming that even our modern culture, well tutored and reared off ideals that assert humans to be the measure of all things and who can, through reason and willpower, stand up to events and scoff at the notion of fate, must tremble with a sense of hopelessness. We buy energy efficient goods, advocate for government actions and international treaties, but I don’t think we have adequately dealt with unpleasant truth that our actions may have little to no impact on the course of the environmental change we have put in place.

Such a bleak assessment complements the vision of the Mahābhārata, which incidentally has proven to be far too bleak for many in India, where it has long been believed that reading even a portion of it or keeping a copy in your house, will bring bad luck.

Despite its deeply pessimistic worldview—one I maintain we should all feel with regards to our current environmental situation—over and over, wise men and gods in the Mahābhārata counsel others not to give into despair. For example, when the sage Vidura counsels the blind king Dhrtarāstra on the futility of grief when placed in the larger scope of life and death, saying: “Grief destroys beauty, grief destroys strength . . . Nothing is gained by sorrowing, the body just suffers . . . Again and again man dies and is born . . . rises and falls . . . asks and is asked . . . mourns and is mourned.” Thousands of years later, we are still subject to despair. But as modern inheritors of the Enlightenment, we also believe that despair and suffering can lead to action, and through action we can change the world.

When facing our present environmental crisis, many respond by seeking to live more simply. We buy more environmentally friendly products, vote for the candidate with the right platform, and so forth. Though the environmental crisis may be overwhelming and though we know recycling our milk jugs won’t make a difference in the overall picture, we nonetheless want to act in a way that will have an impact on the health of the planet. We want our actions to make a difference.

In the best-known part of the epic, the Bhagavadgītā, the god Krsna counsels Arjuna, one of the central heroes, to act without regard to the fruits of his action; to neither rejoice nor grieve at what may come. The true wisdom is to act, and act in a way that is above grief, joy, sorrow, or even ethical considerations. One must transcend these mental trappings and act with devotion, as though they are part of a sacrificial rite. “Keep your mind on me, honor me with your devotion and sacrifice, and you shall come to me,” Krsna says. “Abandon all the Laws (sarvadharman, literally ‘all the dharmas’) and instead seek shelter with me alone. Be unconcerned, I shall set you free from all evils.” Instructing Arjuna to act with devotion and take part in the great ritual of existence, Krsna refers to himself both the world destroyer lokakṣayakrt and the world preserver lokasamgrahah, that is to say, to seek shelter with Krsna is to seek shelter with that which maintains and destroys the world, that creates and destroys you.

This commandment, to devoutly act and in doing so, embrace the circumstances that are beyond your control, that may very well destroy you, echoes of one of Nietzsche’s favorite lines, amor fati, or “love of fate.” It is no less of a commandment than to love the world. Even if it’s becoming hot, crowded, polluted, stripped of its forests and in general, going to hell, we should embrace this world as it is, not as it ought to be.

There are many scenes in the Mahābhārata where characters go to their death, performing their task in total devotion to their lot in life, and finding peace. This does not put an end to the war, nor does it prevent all the heroes from dying at the end of the epic or save humanity from falling into the degenerate age of the Kali Yuga.

To act in a way that will leave the world a better place or will make a difference for the better, may be as close as we get to a universal moral precept in twenty-first century America. Of course, opinions on how to do this differ wildly. As the climate warms, the oceans become a great island of plastic, and the earth enters a new era brought on by human activity, we who have been reared by rational, pragmatic ways of thinking look for ways to reverse the damage and destruction. Applied to the present day, what we see in the Mahābhārata is that there may be ways to come to peace with our situation, but we cannot save ourselves or save our planet.

For most, I suspect, this may not be very satisfying. You should feel unsettled by it.

We don’t only turn to ancient texts such as the Mahābhārata to confirm what we already believe. Rather, the value of studying them and entering into the world they present is to encounter a different perspective, a different way of being that we might not necessarily agree with or understand, but can enrich our conscience and expand our imaginative capacities as we come to grips with a world that may be slipping out of our categories of thinking.