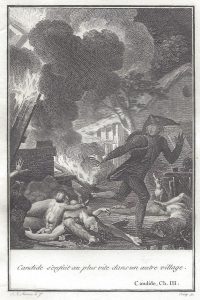 A succession of category 5 hurricanes, forest fires swallowing parts of California and Portugal, the devastation from the monsoon in South Asia, and a slew of other natural disasters have led many to wonder if we have finally reached something of a tipping point where such environmental catastrophes will now be something of the new norm.

Amid the flurry of reporting, Time Magazine came out with a very telling response on its cover. It read: “The storms keep getting stronger and so do we.”

Such bold optimism! Don’t get me wrong, it’s not unfounded. Human ingenuity has done wonders to protect us and our homes from natural disasters. Still, with the uptick in stronger storms, hotter forest fires, rising sea levels and more, I can’t help but think the tune we’ve been hearing for some time—that we can engineer a better world and outwit mother nature—might be a little overplayed.

The roots of our optimism can be traced back a couple hundred years to the Enlightenment, when science and reason duked it out with faith and superstition. More than advocate an epistemology, or method, for arriving at truth—or some semblance of truth—those in the rationalist camp also rejected the Christian view that said humans lived in a fallen world. Far from living in a postlapsarian world of sin and despair where the only way out was through the Christian faith, they maintained that we lived in a good world which reason could make a whole lot better.

As children of the Enlightenment, we have inherited this belief. We have had great success in extending life expectancies, eradicating common diseases that once killed millions, and overall, making life much more convenient. Even if 2017 is an incredibly depressing year, with plenty of fodder for despair, I would argue that many still maintain that we can do better, and that the potential to create a better world is a deeply held belief.

But when it comes to changing environment, is there a limit to this perspective? Is such optimism going to see us through, or are we singing a pretty song as the ship sinks?

This is not a new question. As optimism has shaped our worldview for several hundred years, people have routinely mocked and criticized this outlook for an equally long time. Perhaps this was most famously done by Voltaire, the penname of François-Marie Arouet, in his brutal satire on the philosophy of optimism, Candide.

The novella follows the journeys of Candide, a young man brought up in a privileged world, educated by Dr. Pangloss who teaches him that we live in “the best of all possible worlds,” something of the metaphysical ancestor to our contemporary “everything happens for a reason” attitude. Expelled from his sheltered home, young Candide sets out on a picaresque series of misadventures where he discovers that, far from being the best of all possible worlds, he lives in a world where rape, murder, religious violence, deceit, greed, and injustice are the norm.

In lampooning the philosophy of optimism, the work becomes a burlesque of suffering. It presents horrific rapes and mutilations in such a darkly comic way that I can’t help but think that if it were written today, the novella would spark a powder keg of outrage in the Twitterverse and force the publisher to apologize for treating traumatic subjects with such grotesque irreverence.

One of the historic incidents young Candide manages to live through is the Great Lisbon Earthquake of 1755. This seismic disaster leveled large parts of the Portuguese capital, killed anywhere from 10,000 to 100,000 and left philosophers, theologians, common people and scientists struggling to make sense of the catastrophe.

In his “Poem on the Lisbon Disaster,” Voltaire savagely attacked many presumptions and explanations traded among intellectuals of his time, and one target of his indignation was the optimism of the age:

Yet in this direful chaos you’d compose

A general bliss from individuals’ woes?

With faltering voice you cry, ‘What is, is right’?

Several years after composing this poem, Voltaire returned to the Lisbon earthquake in Candide, and did so in a more satiric vein, mocking rationalist philosophers and the barbarism of the religious authorities. While many may have searched for an explanation or a reasonable way to account for the scale of destruction and suffering that came with the earthquake, ultimately there was none. Such failing gives way to parody, but beneath his ironic gaze, Voltaire recognizes that the earthquake was an affront to religious belief, it mocked reason and defied explanations, as the Shoah or the atom bomb would undercut the understanding so many had of the world in the 20th century.

Voltaire is famous for being anti-religious, which Candide is, but it is also profoundly anti-philosophical and anti-ideological. It’s as if the entire work is telling us that our mental life, populated by faith, hope and ideals, makes us ignorant to the true nature of the world and lead us down a blind alley where a nasty, perhaps comic, surprise awaits.

Voltaire does not treat this theme with any subtly. Shot through almost every page is an outrageous discontent that pits ideals against reality. The elements by which Voltaire composes his satire could just as easily be used to craft a tragedy. Indeed, in the hands of another author, Candide, which is a catalogue of rape, colonial atrocities, ethnic hatred, war, torture, and much more, could be a heavy, brooding work.

In facing our current environmental catastrophe and struggling to come to terms with the inefficiencies of our ideals, many writers would opt to put on the tragic, rather than the comic mask. A tragic dystopia might be an easier route to take; after all, satire and comedy are particularly unnerving to unleash on such painful subjects.

What I wish to suggest is that perhaps there is something in our current situation that can be given the satiric, comedic touch. The value in reading and thinking about Candide, is it points to a darkly humorous path writers might take in trying to imagine the heart ache, the horror, and the suffering that are part of our current Lisbon earthquake, that succession of natural and environmental disasters we are now living through.