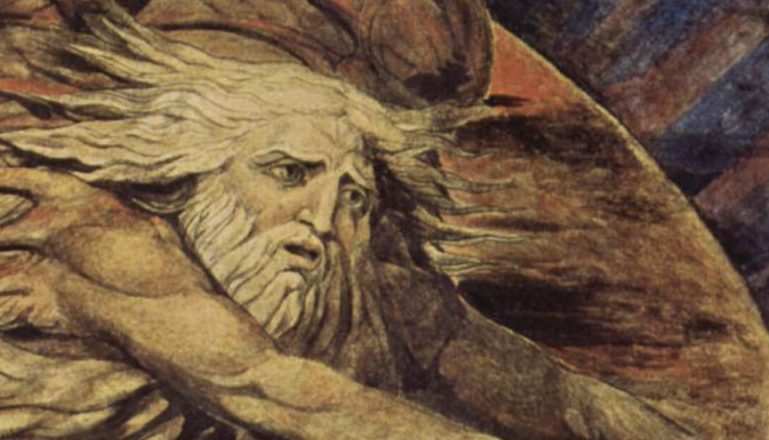 The posts in this series, Confronting Our Environmental Apocalypse, consider various traditions, ideas, and or authors in the search for imaginative ways to give voice to our current ecological disaster.

I am made to sow the thistle for wheat, the nettle for a nourishing dainty:

I have planted a false oath in the earth; it has brought forth a Poison Tree:

I have chosen the serpent for a counsellor, and the dog

For a schoolmaster to my children:

I have blotted out from light and living the dove and nightingale,

And I have causèd the earthworm to beg from door to door:

I have taught the thief a secret path into the house of the just:

I have taught pale Artifice to spread his nets upon the morning.

My heavens are brass, my earth is iron, my moon a clod of clay,

My sun a pestilence burning at noon, and a vapour of death in night.

Passages like this sustained me through my initial forays into William Blake’s so-called Prophetic Books, The Four Zoas, Jerusalem, and Milton. Extravagant, disjointed, hallucinogenic, and laden with contradictions that seem to subvert any cursory understanding, it can be daunting to take that first step into Blake’s world.

A testament to the extreme reaches of the imagination, these books bring readers into unfamiliar territory that, poetically and imaginatively, are worlds beyond the conventional meters and rhymes of Blake’s most well-known work, Songs of Innocence and of Experience.

Born in 1757, at the height of the Enlightenment, and dead in 1827, when the Romantic movement was on the wane, Blake’s life spanned revolutions that would transform not only the political landscape, but the European conscience as well. For a poet and a writer, the question of how to give expression to the changes that took place because of industrialization, the Napoleonic wars, American and French Revolutions, must have been daunting. For Blake, neither rational science nor traditional religious beliefs could account for the world in which he lived, and so, he set out to cast off worn-out ideas and tired words to create a new and exuberant voice suited for this brave new world.

Blake saw himself as a prophet battling the tyranny of nations and the tyranny of thought. The same chains rulers and generals placed on people could be linked to the chains of mental oppression. His task was to wake people up and free them from what he so perfectly called their “mind-forg’d manacles.”

The thinkers of his age were trapped by rational and scientific dogmas. Existence, Blake maintained, could not be contained by a rational system. To attempt this was to restrict human freedom and confine consciousness to a narrow prison of the senses. Some of his favorite targets—Newton, Bacon, Voltaire and Locke—only uncovered a small portion of reality. Their rational tools had limited use and were ultimately impoverished instruments that failed to capture the whole of reality. For Blake, only the imagination could reveal a larger reality, one that lay beyond the concepts and the mental habits most were imprisoned by.

To court the exuberant freedom of the imagination, Blake had to cast off the chains of rational discourse. Indeed, this is one reason his major poetry is so demanding. Immersed in what he considered the divine power of the imagination, Blake’s prophetic vision is tied to a voice that exceeds the bounds of rational thought, a voice that must break through delusions and bring readers into a reality beyond the mental constructs they had built their lives upon.

You can see why Blake was so popular in the 1960s.

As much as he was a spiritual visionary, Blake was also a political radical, deeply engrossed in his times and the radical subculture of his day. Recently, what has made me think of Blake is not so much his prophetic quest to liberate humanity, but the way in which he was sought to create a mode of expression adequate to respond to the times in which he lived.

What then, does this all have to do with the literature of climate change? On the surface, Blake says little that can help us in our time of environmental crisis. His ideas probably do more harm than good. He was, after all, a poet who saw external reality as a barrier to imaginative freedom, who scrawled in the margins of his copy of Wordsworth “Mental things are alone Real” and “Natural Objects always did—now to weaken, deaden—obliterate the imagination in me.” At a time when we desperately need to face a larger, external reality beyond ourselves, Blake’s idealism seems to be a luxury we can no longer indulge.

However, it is Blake’s tireless insistence to bring forth new forms, reinvent old systems and imaginatively confront the events of his time that can be a model for contemporary writers.

Like Blake, we live in unprecedented times, and I don’t think we know how to honestly confront our environmental situation. The moral and existential problems we face cannot be adequately addressed through traditional modes of thought or expression.

For instance, the scientific and humanitarian advances that have led to the eradication of diseases, the enormous reduction of infant mortality, and doubling of the lifespan for much of the world, seem like unequivocal moral goods that should be expanded. Anything that makes life less short, nasty and brutish is good. However, our success in this area has resulted in a global population of over seven billion. More than coal, plastic bags or fossil fuels, the sheer number of people on the planet is the primary contributor to our present environmental catastrophe.

Yet overpopulation is an issue that is rarely discussed. One reason is that it is a topic that ruptures our basic moral beliefs, and presents a situation that pits ecological responsibility against long-standing moral imperatives to elongate and save lives. It’s easier to dismiss this as alarmist rhetoric and insist that the modern Peaceable Kingdom, where technology and proper policy will allow for 9.7 billion people (the projected number by 2050) to live in harmony with the natural world, is within reach.

Let’s mark that as a big maybe.

Our once-reliable points of moral guidance, holdovers from a time when life expectancy was half what it is today, when, most children died in infancy or before they turned five and a diminishing of population was a continual threat, might not be compatible with the problems we face with the Anthropocene.

I don’t know what the solution is or if there is one. However, whether it’s philosophers, politicians, poets, policy makers, or novelists, there is a great need to imaginatively push through our mental habits and patterns of thought in order to confront the nature of our situation. I see Blake as an individual who faced similar questions and anxieties. He took an imaginatively erratic route, and as we now face an environmental situation that has no precedent, Blake’s radical imagination is a fascinating example of how a literary artist can forge new modes of expression in order to confront the contours of the shifting reality in which they live.