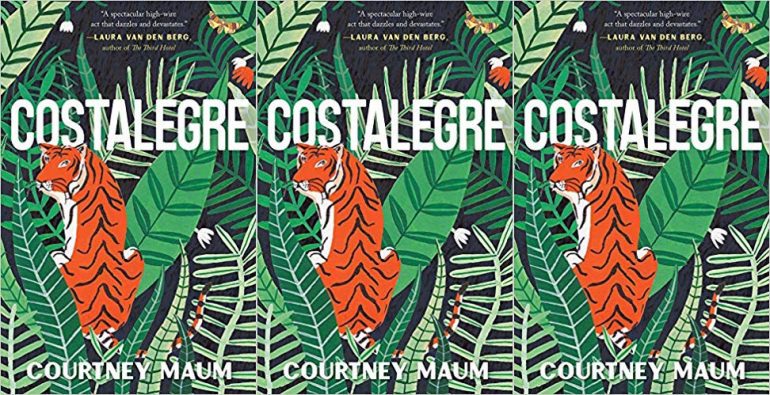 “The funny thing about the artists,” 15-year-old Lara says, “is they all look silly naked.” In Courtney Maum’s Costalegre, set at the dawn of World War II, Lara’s mother, Leonora, hauls her off with a band of Surrealist artists to half-hide, half-work in the Mexican jungle. Based on the relationship between famed art collector Peggy Guggenheim and her daughter Pegeen, the novel sketches the long road to loneliness for a child of creatives. Lara’s narrative, told as a series of diary entries, drawings, and lists in the faux-British lilt of the 1940s era, veers quickly from sarcasm to sincerity and back again. Lara’s day-to-day observations move the plot at a clip. Their sensory details situate the reader alongside the characters, looking over the shoulder of a photographer placing cherries on each of his model’s eyelids or knee-to-knee with Lara journaling in her room. With both humor and criticality, Maum’s coming-of-age novel probes the hypocrisy of the art world, the challenges of being a child of artists, and the dangers of not being loved.

Living in a room without a door and given little consideration but for her beauty, Lara is simultaneously under constant scrutiny and never seen for who she truly is. Her relationship with her mother yields self-deprecation and destruction. Of the shipment of artworks Leonara obsessively monitors, Lara writes: “I’d sink her awful collection, and then what would she do? There’d be nothing left to fawn over and boast about and move around the world for and maybe she would be emptied enough to finally mother me.” Lara doesn’t long for all of her mother’s attention. She just wants enough to survive. Lara fears that the external validation of the art world, symbolized by the ship, is more Leonora’s baby than Lara will ever be. Her fears are confirmed when her near-fatal horseback ride into the eye of a storm produces no response from her mother.

Lara’s study of her mother’s duplicities reveals the double life she must lead as a child of the creative world. “Mother never expects me to comment on the paintings,” Lara says. “She needs a witness to hear her call them something that they aren’t. And then that’s what’s said in public.” Treating her daughter as her own shadow, Leonora makes both a liar and a fraud out of Lara. With tragic realism, Lara understands her mother’s love is dependent upon her ability to parrot art-world approved opinions.

To cope with the constant rejection from her mother, Lara resorts to creating fantasy that borders on delusion. While writing about her favorite memory in her diary, Lara quickly realizes that the memory is not a memory at all but rather a domestic reverie of unconditional care conjured by an idyllic photograph of her parents holding her as an infant. “I’ve only seen a picture of it,” she admits. Lara is forced to imagine rather than experience a time in which she was her parents’ first priority.

The book also captures the teenage tug-of-war between parental attachment and independence. Lara enviously describes her brother’s childhood dive into the ocean against the will of their mother: “…what I remember most… [is] my brother smiling as he jumped into the ocean. The beauty of that first time that was only his.” In a hyper-opinionated household, her brother’s individuation is an accomplishment. Lara’s own attempt to break with familial norm , she says, “I’ve spent my whole life agreeing that I’m delicate, and what has come of that?”

In a world where creative and intellectual production are commodities, Lara is paralyzed by the pressure of “having something to say.” She frets constantly about her own perceived lack of courage and talent. She paints in secret. She lingers longer with people in the hopes that someone will “discover her.” She is disappointed every time.

Thrown together with students studying psychoanalysis, politics, and surrealism who interpret dreams, paint each other’s nude bodies, and rage against the conventional, teenage Lara quickly adopts the unspoken rules of the avant-garde. In this clique of mostly male, ideology-drunk artists, informed indifference is (literally) painted as holy irreverence. The artists spend days being “upset with everything and [turning] things upside down,” denouncing foreign policy while painting exotic fruit by the pool, and, to paraphrase Lara, making useless objects then calling them art. They never say what they feel and only what they think. Lara learns to contain her emotions to her journal for fear that the artists will dub her sentiments passé. When Lara does finally have an emotional outburst, she admonishes herself: “Well, isn’t it stupid to wish things?” Lara demands in her diary. “Isn’t the worst thing to have hope?” Suddenly, the girl who has tried so hard to make herself small has too many feelings to contain.

Costalegre delivers searing commentary on individualism in the art world. Lara’s struggle for emotional connection brings to light a central question around the artist lifestyle and personal relationships. Reclusive artist Jack Klinger tells Lara that all the artists are jackasses, “but at least their art’s alive.” This begs the question: do we have to sacrifice personal relationships for our art to be alive? The failure of art to build community prompts the reader to consider the possibilities of creative practices that provide avenues through which to relate. Rather than a deep investigation of the self, art becomes instead a two-way mirror, the purpose of which is to see and be seen.