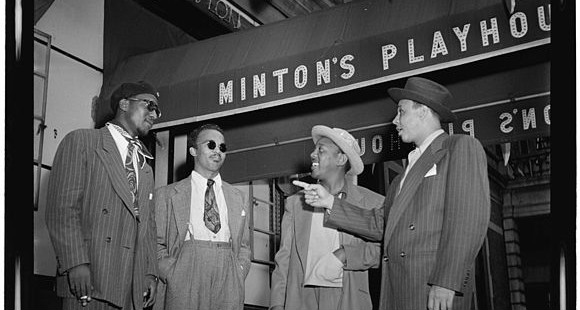 Reading The Blue Devils of Nada, Albert Murray’s 1996 collection of essays on jazz, the blues, and American expression, I penciled four question marks next one line. The line comes in the middle of a complicated argument in which Murray suggests that Ernest Hemingway is America’s prototypical jazz writer, a literary equivalent to Count Basie. The broad contours of that argument are shocking enough (Hemingway? A jazz writer? He of the clipped sentences and the 39 rewrites of the ending of A Farewell to Arms?), but Murray makes it work.

Murray really stretched my credulity, though, in writing that Hemingway’s jazz ethic “could have as much to do with being Midwestern as with anything else.” The Midwest is not what I think of as a natural spawning ground for a jazz sensibility. The South? Of course. New York? Sure. But the Midwest? That doesn’t seem right.

It’s true that Murray isn’t referring to Hemingway’s upbringing in Oak Park, Illinois, but to his time a little farther west, in Kansas City, home to Charlie Parker. And the idea starts to make more sense when you read the essays on jazz that Ralph Ellison, Murray’s longtime friend, wrote for Esquire, The Saturday Review, and High Fidelity in the 1950s. In them, Ellison creates a distinctive jazz geography, one where jazz is as much a feature of the Great Plains as it is of eastern cities or the piney woods of the South. Writing about Jimmy Rushing—who, like Ellison, was from Oklahoma City—the author finds “a romanticism native to the frontier, imposed upon the violent rawness of a part of the nation which only thirteen years before Rushing’s birth was still native territory.” Jazz, in other words, could be a cowtown phenomenon, too. Though he left Oklahoma at 20, first for Tuskegee and then for New York City, Ellison remained interested in the musicians from his hometown and from the nearby Kansas and Missouri jazz circuits, such as Parker, Ben Webster, and Coleman Hawkins. As a result, in Ellison’s jazz geography, New York City becomes an extension of his early experiences with the music, a colony of jazz’s periphery.

This is especially true of “The Golden Age, the Time Past,” Ellison’s most poetic jazz essay, which was published in 1959 by Esquire. The piece is a paean to Minton’s Playhouse, the Harlem nightclub that in the 1940s hosted jam sessions that set the foundation for the style that would become known as “bebop.” Ellison witnessed those jam sessions, and as both a musician himself (Ellison originally went to Tuskegee to study music) and a passionate amateur jazz historian, he was able to recognize their importance and chronicle them with accuracy and sensitivity. The essay is at once an attack on the nostalgia of the jazz tourists who came to Minton’s to gawk with “startlingly innocent European faces,” and an act of nostalgia itself. In a beautiful early line, Ellison writes of “those who were to see and hear it as it happened, who pressed in the rows beneath the dim rosy lights of the bar in the smoke-veiled room, and who shared, night after night, the mysterious spell created by the talk, the laughter, grease paint, powder, perfume, sweat, alcohol, and food—all blended and simmering, like a stew on the restaurant range, and brought to a sustained moment of elusive meaning by the timbres and accents of musical instruments locked in passionate recitative.”

The essay is full of contradictions like this. Another is the way Ellison depicts Minton as both unique and “a part of a national pattern.” Among the places Ellison compares to Minton’s are “Piney Brown’s old Sunset Club in Kansas City” and “Halley Richardson’s shoeshine parlor in Oklahoma City,” where Ellison says he “first heard Lester Young jamming in a shine chair, his head thrown back, his horn even then outthrust, his feet working the footrests, as he played with and against Lem Johnson, Ben Webster.”

By the end of the essay, Ellison has turned Minton’s into a Wild West saloon, a lawless place that nonetheless developed its own “code,” a sanctuary where musicians could find respite and company as well as danger, since the place drew young gunslingers in from Kansas City or St. Louis or Texas or Oklahoma, eager to show up their elders. “As with the fast guns of the Old West,” Ellison explains, “there is always someone waiting in a jam session to blow him literally, not only down, but into shame and discouragement.”

Ellison lived in New York for virtually all of his adult life; the city clearly captivated him, and that enchantment shows up in both Invisible Man and in his many essays from the 1950s and 1960s. At the same time, those essays—and especially the ones that focus on jazz—show that the prairies of the Great Plains never lost their hold on him, either. Ellison once wrote that American life “comes to focus” in jazz, and commenters have long noted that when Ellison writes about the music, he’s really writing about society in general. “The Golden Age, the Time Past,” like the rest of Ellison’s jazz writings, reveals that there’s more misdirection at work in the author’s oeuvre. Even when he’s writing about New York, Ellison is still writing about places far to the west.