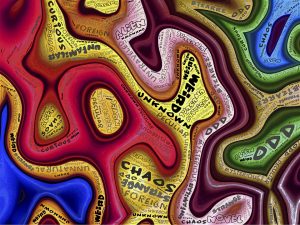 The phrase “I think” has its roots in the Latin word “cogito.” The prefix “co” meaning together and “gito” meaning to shake up. The best thinking happens when you shake things up.  Brilliant discoveries occur when things are not so singularly focused and orderly.

The Renaissance period in Europe from the 14th to the 17th century, which ushered in an explosion of creativity arguably unrivaled by any other period to date, is a perfect example of this.

During this time, there were numerous advancements in science, math, engineering, and most notably in the arts. Leonardo Da Vinci’s Mona Lisa, Michelangelo’s Sistine Chapel and his David, a triumph of sculpture, Sandro Botticelli’s The Birth of Venus, and Benvenuto Cellini’s statue Perseus With the Head of Medusa are just few of the masterpieces produced during this period.

The concentration of so much creativity during The Renaissance has a lot to do with how they mixed things up when they worked. Artists worked together in artists’ workshops. Artists, including the likes of Da Vinci and Michelangelo, worked alongside one another creating everything from stage sets with movable parts to banners and masks and costumes. Each workshop had a system of mentorship and they mass-produced works of art as well as competed for highly prized commissions with other workshops. Masterpiece or pageant floats—the artists collaborated equally on both. They worked in variety of materials, fabric, wood, glass, paint, clay, and stone and every artist was required to know how to do many things. They couldn’t just be painters, they had to be sculptors and architects and engineers.

The term “Renaissance man” or “Renaissance woman” refers back to this time period when a broad set of skills and talent were revered.  What makes Renaissance artists so compelling is that the body of work they produce cross-discipline and genre gives us a deeper context in which to interpret their work as a whole.

Take, for example, Flannery O’Connor. She credits her habit as writer to the skills she learned as a cartoonist and visual artist. One look at her drawings and you can clearly see her writing voice. The remarkable wit and gothic tenor evident in her writing appears in her drawing as well.

Working across disciplines can open up creative possibilities in unexpected and often brilliant ways. Patti Smith regarded herself as poet who got “sidetracked by music.” And thank god she did. Imagine the void that would be left in our culture’s understanding of itself without her music.

Marcel Proust believed that if we don’t shake things up, we fall prey to habit. According to him, life would be full of splendor if only it didn’t consist of habit. Habit dulls the senses. The repetitive nature of it can numb the mind and break the spirit.

To think creatively, to invent new things, to see new patterns, we need to turn things upside down, on their heads and have a fresh look. Albert Einstein did this in a process he called “combinatory play.”  He was constantly mixing and remixing, connecting and disconnecting discordant ideas, and combining thoughts into unusual patterns.

When Einstein got stumped with a problem, he’d shake things up in a different way. He’d walk away from the problem, pick up his violin and lose himself in his playing. In doing so, he rid himself of conscious thought and all the roadblocks that come with it. He believed this opened up neurological pathways, and in this reordering, new patterns and ideas emerged. Some of his most astounding breakthroughs came to him while playing his violin.

By shaking things up, we can expand our view and change our perspective. Dr. Temple Grandin revolutionized the handling of livestock on cattle ranches by doing this. Grandin invented a corral system that keeps cattle calm without hurting or restraining them. Her system is now used at nearly half the cattle ranches in North America. A crucial part of her research came about when Grandin, who is autistic, literally pretended to be a cow.  “I visualize the animal entering the chute, from different angles, different distances, zooming in or wide-angle, even from a helicopter view—or I turn myself into an animal, and feel what it would feel entering the chute.” Dr. Grandin didn’t just imagine being a cow, she got on her hands and knees and entered the chute herself.

Stepping into another viewpoint is one of the most creative forms of thought there is. Writers often learn how to do this by studying acting. Shakespeare was an actor and Mark Twain was obsessed with the theater. The influence these additional skills and interests had on their work is evident. Truth: Persona, Needs, and Flaws in the Art of Building Actors and Creating Characters written by renowned acting coach Susan Batson, gave me more insight into character development than any writing book ever did.

Dr. Robert Bilder, Director, Tennenbaum Center for the Biology of Creativity at UCLA Integrative Center for Neurogenetics says, “The truly creative changes and the big shifts occur right at the edge of chaos.” When we shake things up, we put ourselves at this edge of chaos, and it’s in this chaos that innovation and new order can emerge.