Home
»
Uncategorized
»
The Ploughshares Round-Down: Creativity Is Neither Magic Nor Madness 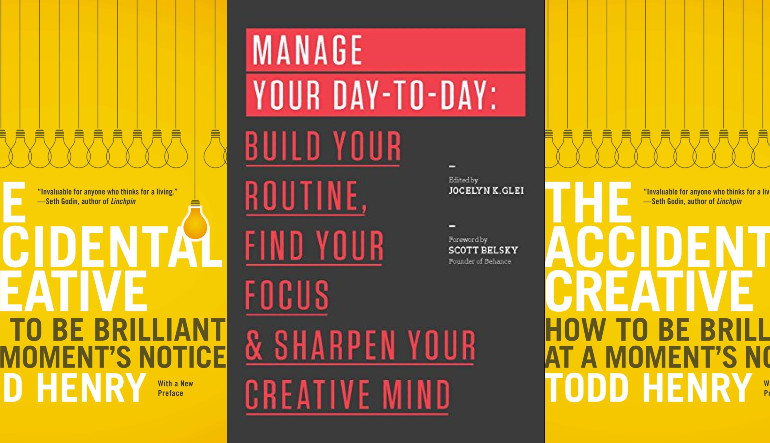 At the end of 2009, I was hunched in the passenger seat of a van, weeping down a midwest interstate. We’d just recorded an album with a Grammy-winning producer, paying for it with months of fan-funding hype. And we were touring to promote it, planning to release it ASAP, when seven years of full-time music-ing suddenly clobbered me.

I remember not being able to look at my partner. “I don’t know what to say,” I told him. “Music is all I’ve ever wanted to to do. But I can’t do this anymore.”

In a way, this is how I wound up here, writing for the Ploughshares blog. Because the thing about depression is that nothing ever rises above the blah surface of the Great Gray Blah of Infinity. If you’re super-lucky, you have people helping you latch on to any spark of interest in whatever, however dim. That 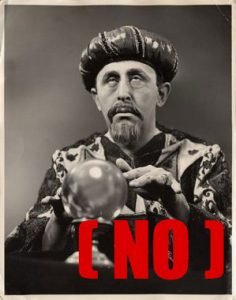 December, my one dim spark was poetry.

So on Christmas day, having googled “pay me to read poetry” (yep), I found a creative writing graduate program. I mailed off an application on a whim, not expecting to get in. I went back to sleeping and watching The Dog Whisperer. (I KNOW.) I was in bed for weeks. I began therapy. I started medication. I slowly got healthy. And I got the call that led me to grad school and a writing career.

Given my history, it’s no surprise that Gila Lyons’ recent article in The Millions—in which she describes her battle with severe anxiety disorder—resonates. Her illness turned her final year of a writing MFA 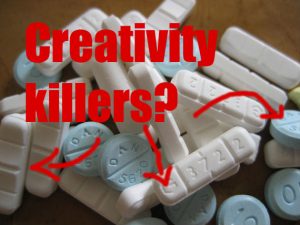 into a blur of emergency room visits. For years she’d put off getting help, fearing medication (the only help she seems to have considered) would rob her of the “hyper-aware, exultant perceptivity” that had made her both prolific and successful. Eventually, she thought she’d have to choose between life and the thing that gave her life meaning: writing.

Unfortunately, this impossible choice feels real to far too many of us in creative professions, who (according to some studies) are more likely to suffer from depression than the general population. I too attributed the success of my songs to the depression that seemed to engender them. But the fear of health reveals a seriously limited—and therefore dangerous—understanding of how mental illness is treated. More broadly, the fear of control feeds the myth that creativity is some kind of Mysterious, Mad Magic.

It’s not. When my depression got so bad that I couldn’t function (let alone write), I couldn’t argue anymore about getting help.

And lo, Cymbalta mocked my fears that a happier Tasha would stop writing: I’ve written far more post-depression than I ever did before.

Regardless of whether you’ve suffered from mental illness, there are things we can all learn from the popular myth that “madness”—or at least some kind of untamable magic—begets creativity. By owning up to our reliance on Magical-Muse thinking, we empower ourselves and each other to make more and better work. And to be healthy while we’re at it. So:

Five Ways to Kick Magical Thinking (and Get To Work)

Okay, spoiler alert. When Lyons finally got help, her writing did change. Ideas don’t steamroll her like they used to. She has to discipline herself to get the output that used to bully itself onto the page. Where she once wrote compulsively, she now has to construct routines that keep her motivated, focused, and productive.

But she does it, and she’s enjoying it:

Though it takes more discipline to sit down and write now, since I am not doing so to save my life, I am practicing writing from a place of curiosity rather than pain, fascination rather than desperation…

This is empowering. Before, Lyons’ writing relied on the sporadic movements of an unruly mind, and she had no control. Now she takes responsibility for her imagination, her practices, and her influences. Like all professional writers must, she’s learned to observe how she works best, and construct routines that support it. Which leads us to:

The seeming whims of The Muse (and/or of mental illness) are frightening, because we and our work appear to be at their mercy. But their often-unarticulated benefit is that they relieve us of artistic responsibility. If we believe we have no control over our output, then we’re not responsible when the well dries up, or when our work isn’t connecting with an audience. Hey, this was just given to me; it’s mysterious; it’s barely mine. I can’t help it if no one likes it.

The truth is, overcoming our fears may mean owning up to the ways our beliefs about Mysterious Inspiration let us off the hook when we’re being undisciplined. To what extent is our magical thinking driven by the fear of responsibility?

Okay, yes. Creatives are more likely to have mental health issues than the general population. But the jury’s out (way out) on whether mental health is responsible for creativity. For one thing, it’s likely that those with mental illnesses are simply more inclined to choose artistic vocations. Plus, for every Sexton, Plath, or Wallace, there’s a number of (relatively) healthy authors whose “genius” has no such stereotypical source. In fact, far more studies support the idea that art boosts mental health by encouraging observation and communication of one’s emotional and thought states.

In 2012, Psychologist Scott Barry Kaufman published, “Why Weird Experiences Boost Creativity.” The title sounds flippant, but here’s the gist of the article: unusual or unexpected events trigger creativity by increasing our cognitive flexibility. In other words, after weird things happen, we more readily make new, creative connections between disparate ideas, resulting in engaging and innovative work.

For some writers, mental health issues have done this “unusual experience” work for us. In addition to making life hellish, disorders can also make “simple” day-to-day stuff unusual, unexpected, or even traumatic. This results in some crazy great connections, and in undisciplined—yet prolific!—production.

But to therefore believe that some measure of mental illness is required for great work is to hand over our power to be proactive about unusual and unexpected experiences.

Kaufman’s piece—along with other resources, like 99U’s Manage Your Day to Day and Todd Henry’s Accidental Creative—offer practical ways to set yourself up for creative encounters. You can be disciplined and healthy, and still notice what others miss. The choice may not be between “madness” and dullness, but between passive and active engagement.

Having just read Lyon’s article, I was drawn to Lupita Nyong’o acceptance speech for her 12 Years A Slave Oscar, and author Susan Minot‘s interview on NPR about her novel Thirty Girls—in which she tells a true story of abduction and abuse that had largely slipped under the media radar.

Granted, I don’t know the state of Nyong’o’s or Minot’s mental health, or whether they believe in magical muses. But their words about their work indicate sober intention, healthful presence, and the humility of artistic responsibility—to themselves and to their listeners. They’ve clearly mined their own experiences of suffering, but in order to thoughtfully embody another’s. The result is not only great art, but also raised awareness and social impact.

Similarly, the choice for disciplined intention and for health (when it’s up to us) may help us see—and voice—the stories around us. It may be that, by securing our own oxygen masks, we’ll see the crazy and crashing world with even greater clarity. I can’t believe we won’t have plenty to say.

What are you doing to get (or stay) healthy? What works for you?

What advice do you have for writers who are relying on unhealthy states or habits for their creative output?

Ask for (and offer) support.

If you think you might be suffering depression, anxiety, or another illness, here are some sources for info and help: