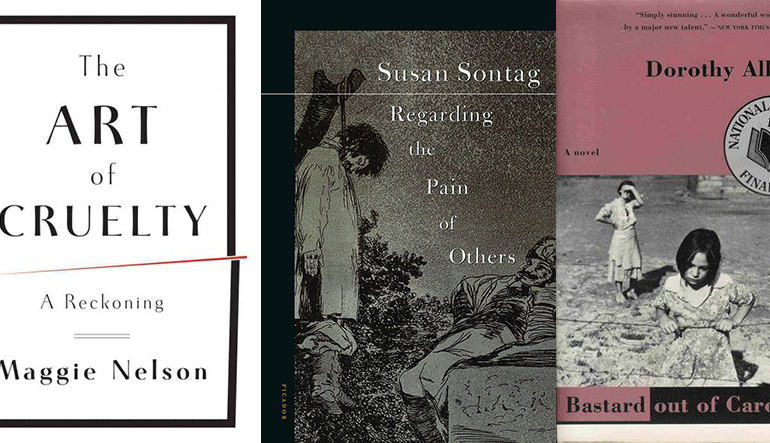 What do we learn from new depictions of brutalized bodies in literature? In terms of media coverage of warfare and political violence, little has changed since Susan Sontag’s Regarding the Pain of Others was published in 2003, of for that matter since John Berger’s Ways of Seeing in 1972.  If anything, suffering is a concept to which we’ve been become increasingly immune. This a pertinent time to ask how violence on the page intersects with or deviates from violence in the world. What does it mean to continue to make representations of suffering, when our response to them is unchanging?

Of sexual violence in The Art of Cruelty: A Reckoning, Maggie Nelson writes that “there is an excellent argument to be made that any rape scene, at this point in cinematic history is gratuitous.” Reading these lines some years ago, I was surprised by how readily I agreed. Having seen countless portrayals of sexualized cruelty, I couldn’t say there was any meaningful shift between my first and hundredth response; the queasy devastation hadn’t become any more nuanced, and although it lingered it was never formative—it was simply a bad taste I couldn’t wash away. If anything, it felt needlessly perilous to pour more visual representation onto an act that occurs prevalently in plain sight and yet goes largely unwitnessed. It’s this cruel duality, perhaps, that makes such representations feel like salt in a very much open wound.

My reaction to written portrayals of violence, however, seems dependent on genre.

True crime’s predominantly female readership has been linked to the genre’s matter-of-fact sparseness. Namely, speaking of cadavers and crime scenes, the genre’s allure is that it’s inherently unbiased: here, unfettered by reductive context, are the facts of brutality against women—she was hurt, she was raped, she was murdered.

Conversely, fiction’s imaginative faculties are cited in grafting a fuller understanding of the hurting body. Trauma and its psychosexual reverberations, for instance, can be detailed at length. This is the case with Dorothy Allison’s Bastard Out of Carolina, in which young Bone, routinely abused by Daddy Glen, finds her developing sexuality increasingly shot through with sadomasochistic tendencies as her subconscious works to preserve the possibility of pleasure and desire.

Straightforward empathy with the victim is not, of course, the sole priority of literary fiction that depicts assault. In Claire Vaye Watkins’s short story “Rondine al Nido,” one friend facilitates the sexual assault of another, and it’s surprisingly difficult to determine the crueller fate: a young woman casually humiliated or the friend who must live, unforgiven, with having betrayed her. As with Mary Gaitskill’s “The Agonized Face” and “The Girl on the Plane,” the tack is not one of humanizing offenders unto the point of sympathy. Rather, these writers inject a degree of visibility that fleshes out our comprehension of how violence functions, rather than visually loading all of this weight onto a victim who becomes flattened and synecdochical as a result.

Might a more particular reading be, then, that literary fiction offers interiorized insights around the “overlappings” that occur within brutalized and brutalizing bodies? Or that textual representation lends itself more readily to what occurs not only to the afflicted body, but within its immediate vicinity, that oscillating spectrum of pain and pleasure, agency and powerlessness, violence and regret?

While this is not, of course, to say that cinema is without subtlety and nuance, it seems plausible that reading representations of violence offers something that seeing them cannot. If nothing else, it seems possible that, through a shared emphasis on the act of watching, on-screen renderings have become too strongly inflected with inaction. Aided in no small part by our easy consumption of global media, we’ve long been immersed in a cultural practice of continuous, inconsequential gazing. This immersion, perhaps, has seen the tissue between seeing and feeling worn down to too thin a thread.

The shift in register between on-screen and on-paper is keenly evidenced by Carmen Maria Machado’s Especially Heinous: 272 Views of Law & Order SVU, a novella that subversively synopsizes 272 episodes of Law & Order: SVU. By recalibrating the grotesque violations detailed in the show through literature, Machado produces, rather than an unchanging, recurring onslaught, a purging experience, a muscular working-through the victimization of women. Granted, SVU is an extreme example, but it speaks to Nelson’s suggestion that a collapse of status occurs within such visual representations; they all produce that same feeling of “simply not worth it.”

Although it could hardly be argued that reading prose is a more worthy undertaking because it’s more likely to incite real-life responses, it does seem possible that, with the causal relationship between seeing and reacting corroded, visual renderings of violence may not present us with anything other than a sensory affront. It might also be argued that the act of reading, in particular reading from a book that you must consider in close proximity to your body, allows for a more intimate, localized response that will engender greater responsiveness over a prolonged period of time.

Does the material intimacy of reading make for a more informed—and potentially entirely crueller—moment of apprehension? Or is it something entirely apposite, namely that reading offers a degree of distance denied by a moving image, wherein the timeframe of our consumption is predetermined?

In contemporary discussions around attachment and detachment, there’s a tendency toward nostalgia for a time we felt more keenly and paid more diligent attention, a time preceding personal technologies and pervasive virtual connectivity. What if we consider that we have not yet, as a species, felt as strongly as we might? What if there is a range of feeling—akin to but superseding empathy—that we’ve yet to fathom or access? What role, in that scenario, do representations of cruelty and violence play? Could they be reframed so that, rather than worrying at an apathetic callous, they’re appealing to an, as yet, untapped pool of feeling?

Regardless, for now, we can consider our own embodied encounters with cruel sections of text versus their cinematic counterparts. On paper, the queasy devastation might feel no less protracted and visceral, but, for this reader at least, her focus isn’t quarantined to wondering when it will stop, and her response entails the heart as much as the stomach.