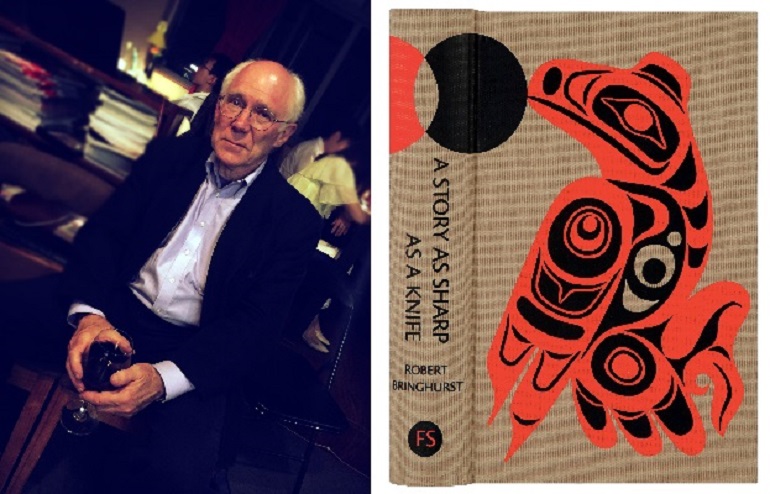 In 1999, Robert Bringhurst—polyglot translator, poet, and typographic authority—published A Story as Sharp as a Knife, a book about Haida myths and mythtellers. Bringhurst retranslates the work of several Haida poets using century-old transcriptions from anthropologist John Swanton, depicts the culture that produced these stories, and shows how Swanton’s transcriptions came to be. The Haida live primarily on islands off the coast of British Columbia and southern Alaska. Their population was decimated by smallpox in the 19th century, with only 1,000-2,000 members remaining today with maybe 10-20 people still capable of speaking the language.

This year, the British publisher The Folio Society republished the book in the UK as a beautiful, clothbound edition complete with new illustrations. This republication was prompted by Margaret Atwood, who provides a new introduction and in it calls Bringhurst “a kind of genius.”

Graham Oliver: I loved how you put anthropology and literature side-by-side to paint a complete picture, but I wanted to ask about your choice to fully explain (or as fully as possible) the role Swanton played in making these texts available. I could imagine a version of this book where Swanton is a note in the back, but instead he’s threaded throughout. What led you to this decision?

Robert Bringhurst: Here in the world of manuscript and print, we like to think that a writer writes a book and that’s it. The text is public; the writing is private. It doesn’t really matter whether the writer wrote at this desk or that one, used a pencil or a fountain pen, drank coffee or tea, wine or water. And even if there’s an interesting tale to tell about how the book got edited or printed, that’s literary gossip. Maybe it will help to sell the book, but it shouldn’t be as interesting as literature itself. All we need to know before we start reading is the author’s name and the title of the book.

That’s fine where it works, but if you treat oral literature that way, you disguise it as something it’s not.

In the case of Native American oral literature, this is not just a theoretical issue. Native American oral literature has been steamrollered and bulldozed by colonial literate culture. There’s been a campaign, conscious or otherwise, to exterminate the stuff and replace it with cute little folktales. “How did any of it manage to survive?” is a very important question. That question leads directly to others: “Who’s speaking here? Where and when and to whom are they speaking? How did it happen that these particular words, this particular performance, managed to survive when so many others didn’t?”

Who tells a story is every bit as important as who writes a book. How a story is told also depends on where and when the telling happens, and on the nature and behavior of the audience. Whenever a linguist walks into an oral society and pulls out his notebook and pencil, he’s introducing some new and potentially dangerous elements. But he’s also introducing a lifeline: the possibility of rescuing some of the literature, even if the whole culture sinks.

The linguist can minimize the intrusion, or he can magnify it. He can create really enormous amounts of static. He can wreck a story even more completely than a lousy editor can wreck a book. But he can also, like a good first reader, warm things up and draw the storyteller out. And he can preserve and transmit what the storyteller chooses to say.

A lot of people have tried to transcribe works of oral literature, and a lot of people have tried to capture them on tape. The number of field linguists who’ve done this well is remarkably small. It takes talent, but talent alone is not sufficient. Swanton did a spectacular job during his year in the Haida country. Three years later, he did a much poorer job among the Tlingit. I wanted to know why this happened, and I was able to find out.

GO: In this book, you explored as fully as possible the identities of the people telling the stories. On the other hand, while transcribing, Swanton minimized/ignored the mythtellers. Why do you think this was? Anthropological training? Or placing a higher value on the texts than on the individuals behind them?

RB: In 1900, Swanton was the only ethnolinguist working in North America who routinely recorded the names of the mythtellers he worked with. He was well in advance of his teacher, Franz Boas, in that respect. Boas really wanted to believe, like the Grimm brothers before him and Lévi-Strauss after him, that storytellers in oral cultures functioned as simple conveyors, adding nothing to the tradition and, with luck, also taking nothing away. But that’s not how it works. Swanton and Sapir are the only two, among all Boas’s students, who immediately saw that that’s not how it works. Boas, and most of his students, really wanted anthropological generalizations rather than individual artistry, but individual artistry is routinely what they got.

It’s true that when Swanton wrote about the individual storytellers he met, he did it in private letters, not in published books. That’s the way he’d been trained, and for him, bucking the system was difficult.

GO: What do you see as the critical differences between the work you have done with Haida “texts” versus a traditional, contemporary translator who might have access to the authors, or at least access to people speaking the language? Differences in responsibilities? Emphases? Is there more need to acknowledge the gap between the two versions?

RB: A translator who works from a written text can usually take for granted the whole apparatus of literate culture. A translator who works from an oral transcript—a kind of core sample drawn from an oral culture—has a different job, because oral cultures and literate cultures are different. This is true regardless of when the transcription is made. It’s true when the translator does the transcribing himself and true when he doesn’t.

But what’s a transcription, exactly? When an oral performance is transcribed, it becomes something else, just as a jazz performance does when it’s recorded. What was fluid becomes fixed. It becomes a text of a different kind. “Third-stream music,” to borrow Gunther Schuller’s term.

GO: What do you think it is about this collection/text that resonated so well with Margaret Atwood?

RB: Margaret has put a lot of effort into enlarging Canadian cultural life. But a single writer, even a great writer, can only do so much. As a colonial culture, Canada started with the self-defeating idea that it brought all its culture with it from overseas. The country can’t grow up, and its literature can’t grow up, until it outgrows that assumption. Margaret understands this.

For a deeper look into Bringhurst’s work, check out this brilliant interview from 2014 in Guernica.