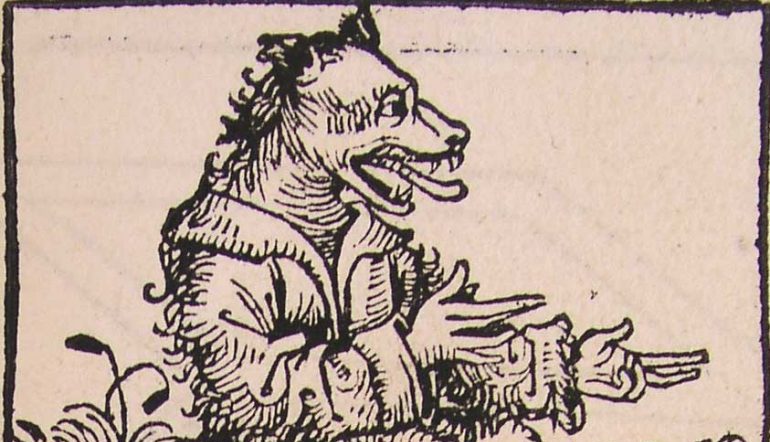 The friction between our human and animal natures (a dubious distinction from the start) has been the subject of inquiry for a very long time, from Nebuchadnezzar, who loses his wits and wanders as a wild man for seven years, to Ovid’s Metamorphoses, which proposes a radical fluidity of form that results in “bodies changed,” to the medieval travelogues and bestiaries that sought understanding through categorization.

One of my favorite prose writers of the 17th century is Sir Thomas Browne. Insatiably curious man, he wrote extensively on religion, medicine, and in my favorite book, Pseudodoxia Epidemica, the silly things that people believe. In Pseudodoxia Epidemica, nicknamed “Vulgar Errors,” Browne spends a great deal of time on the natural world, including animals and their physiology. The earnest inquiry (whether elephants have knees, slugs have eyes, and why Adam and Eve are depicted as having navels), paired with his lively writing style, means more personality than science, and thus an easily enjoyed book. His mission, however, is clear–to sort out once and for all these half-truths that litter the 17th century mind, many of which were leftovers from the inspired yet erroneous bestiaries that rotated so heavily in medieval Europe.

Taking inspiration and information from early texts like Pliny’s Natural History, these European manuscripts and texts introduced unknown parts of the world to their captive audience. With Christian allegory superseding actual observances, bestiaries are enjoyable today partly because most of the information they contain is so absolutely incorrect. The sciopods (men with one giant foot that allows them to not only travel at great speed but use the foot as an umbrella from the sun), blemyae (headless men with faces in their chests), astomi (mouthless men who smell apples and flowers for subsistence and will die if they smell something foul), and cynocephali (dog-headed men, mentioned by Marco Polo and frequently represented) collectively display a worldview dominated by advances in European travel and, consequently, extreme xenophobia.

The books that included such mysterious creatures often documented plants, insects and birds of interest as well. Note what is called a scorpion in the bottom right hand pane, and what is said to be a crocodile in the pane above–animals were often as misrepresented as newly-encountered groups of people–whales, for instance, were depicted in a variety of ways simply because they rarely surfaced for people to see. Elusive animals tend to possess a lumpy, generically “beastly” body with a distinctly humanoid face (another example of the limited perspective of such collections–the whole world looks like those who “discover” it). And like a game of telephone, the more the information was passed along, the wider the gap grew between reality and imagination.

Hundreds of years later, the Enlightenment worked to cement the separation of man and beast through science, science, and more science, “feral children” were found and made into celebrities, and Koko the gorilla used the signs for both “animal” and “person” to describe her species. And while these complicated issues may seem as ridiculously distant as a cynocephali, the Australian artist Patricia Piccinini makes sure we’re not getting too comfortable:

This piece, entitled The Young Family (2002-03), was part of the Venice Biennale 2003. In the catalogue essay for the series that includes this piece, curator Linda Michael writes that Piccinini’s art is “made possible through the completion of mapping of the human genome and other extraordinary developments in science and medicine…Her works embody the ethical dilemmas that arise with increasing urgency during a time of cloning and numerous forms of genetic manipulation, DNA testing, animal-to-human organ transplants, umbilical cord blood banks, and so on ad infinitum.”

This is Bridget’s fourth post for Get Behind the Plough.