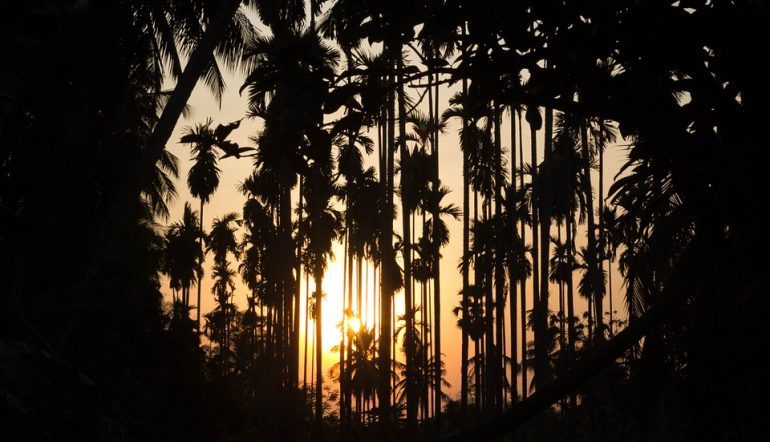 After having children, the always-baffling allure of a commune began to make a bit more sense. I had a daughter and was pregnant with my son when the US media began heavily reporting on refugees dying while attempting to cross the Mediterranean, when hurricanes raged across the Gulf, and when my outlook on American policy became nihilistic. Suddenly, I could understand the impulse to hunker down and surround my children with people who seemed separate from everything I feared was going wrong with the world.

I discovered Lauren Groff’s fiction after reading an interview in the New Yorker about her short story “Flower Hunters.” The story, like many in her recent collection, is about motherhood, loneliness, and friendship. Arcadia, published in 2011, is Groff’s first novel and is set at a commune in Upstate New York. The commune’s name, Arcadia, is an allusion to classical poetry and the Arcadia of ancient Greece. Groff has a history of utilizing classical allusions in her work, with both Fates and Furies and Florida making references to texts as varied as classical Greek drama, mythology, Shakespeare, Middlemarch, and William Blake. In the novel, however, Arcadians are self-conscious of the allusion, explaining that the commune takes as its motto the Latin Et in Arcadia ego. It had been a long time since I read Virgil, but the deliberateness of the reference seemed too important to understand only vaguely. The phrase is usually translated to mean “Even in Arcadia, there I am,” where “I” is death itself. For all the emotional appeal of a communal utopia, that’s the final, inescapable truth that is easy to forget about.

While the allusion to Arcadia is the most overt reference in Groff’s novel, other classical and literary allusions abound. The novel’s protagonist is Bit, a young boy when the story begins, who is lonely at Arcadia and finds connection and meaning in the first book he reads: a copy of Grimm’s Fairy Tales he discovers hidden in the woods. The book opens the door to storytelling but also gives language to the dark feelings of loneliness that he has long sensed and been unable to articulate. He says of the stories: “Horror is heaped within horror: the mother eating her children, the children dying, the mother disappearing forever into the dark behind the story.” Just as he’s begun to lose himself in the world of the book, he hears his mother calling to him, pulling him back into the world of Arcadia: “Don’t ever wander off, Bit. You can get hurt. This place is very, very dangerous.”

Later, when things on the commune have begun to sour, Bit and his classmates read Paradise Lost as part of a lesson on Satan. They discuss Milton and contemplate Lucifer’s argument that humans might be responsible for their own fate. One of Bit’s classmates says: “Let’s use Arcadia as a case study. Think about how things are these days. Think about what you most desire to do differently, what doesn’t make sense, how we should act on our good intentions in the way we’re not right now. We’re not in hell, but we’re getting there.” Right there in paradise, hell is lurking. Later references to Eden (a pair of dirty Adam and Eve puppets make a brief appearance) help both to cement the commune as a nearly mythological place and to underscore the ways that no paradise is without darkness.

As both Bit and Arcadia age, it becomes increasingly obvious that for all its idealism, the commune is going to fail. For years, the children have spent much of the year hungry and cold. Medical care is unreliable, and internal power struggles threaten to disrupt the nonphysical elements of the commune. When the annual summer festival is infiltrated by outsiders looking to sell and buy drugs, a sort of commune tourism, Arcadia goes from merely seeming non-paradisal to being outright dangerous. At this festival, Bit’s first girlfriend, Helle, is raped by two men from the outside. The possibility of mothers eating children and of children dying, Grimm’s Fairy Tale–like, no longer feels metaphoric. Not much later, Bit decides to leave. Even this decision is one he sees through the lens of archetypal story patterns, calling his departure “the nut of the Quest.”

At the end of the novel, Bit goes back to Arcadia following his father’s death by suicide in order to help his dying mother. In the intervening years, he has become an artist, reencountered and married Helle, had a daughter with her, and been abandoned by her. While they were together, it seemed their adult relationship was an attempt to rewrite their childhood relationship, as though doing so might retroactively remove the darkness that was always there. In the novel’s final scenes, Bit has just shown his daughter, Grete, the world of his childhood, a world he’s often tried to convince himself he loved.

The last and most intimate thing Bit shows Grete is an abandoned cottage that was once inhabited by a woman he befriended as a young boy. As a child, Bit first called her a witch, and at first it is unclear if she is a real person or an apparition summoned from his reading of Grimm’s and typical childhood fantasies and nightmares. Throughout his years on the commune, though, he comes to rely on her for advice, learns her name (Verda), and comes to depend on her assistance. She lived in a stone tower in the forest, and when Bit returns after his parents’ death, the structure has been overtaken with trees and all signs of the fairy-tale woman who once lived here have turned gothic. His daughter questions the realness of this witch: Wouldn’t a good-witch mother figure have been exactly what her father was seeking, exactly the kind of safe home he had never had but was still longing to return to? Might he not have told himself this story in order to create, even within a would-be paradise, an actual space for innocence? In my reading of Arcadia, Verda is real, but Grete’s question comes just after Bit has been orphaned as a result of his mother’s death and just as the stories he’s told himself about his traumatic childhood begin to change. On this visit to Arcadia, Bit seeks out his old copy of Grimm’s: “The book is smaller than he remembered, the edges flaking like pastry dough under his fingers…. He hadn’t remembered such beauty. His heart … responds to those once-upon-a-time people, anonymous in the shadows, the faith it took them to come together and listen through the gruesomeness, their patience for the ever after, happy or not.” It’s unclear if “those once-upon-a-time people” are the Arcadians he grew up with or the characters in the fairy tales. When he’s done, he walks through the silent house and finally “lets the darkness in to take its place, where it belongs.”

So much of Groff’s fiction—not just Arcadia—gets at our knowledge of and attempts to avoid the darkness within each of us individually, and within even the most idealistically conceived communities (wasn’t the state of Florida in some ways conceived as paradise come to life?). But, that seems to be just what Arcadia is cautioning against. The commune, though founded with the purest of intentions, becomes a dangerous place not just in spite of its idealism but, in some ways, because of it. That idealism, sometimes going so far as to manifest as ignorance, leaves Arcadia’s inhabitants ill-equipped to confront the darkness. When Groff’s protagonists attempt to deny the darkness in themselves, they invariably self-destruct. To shut myself, or my children, away from the very real sources of evil in the world wouldn’t make them safer. Darkness is everywhere, and it is our attempts to keep it out that pose the greatest risk.