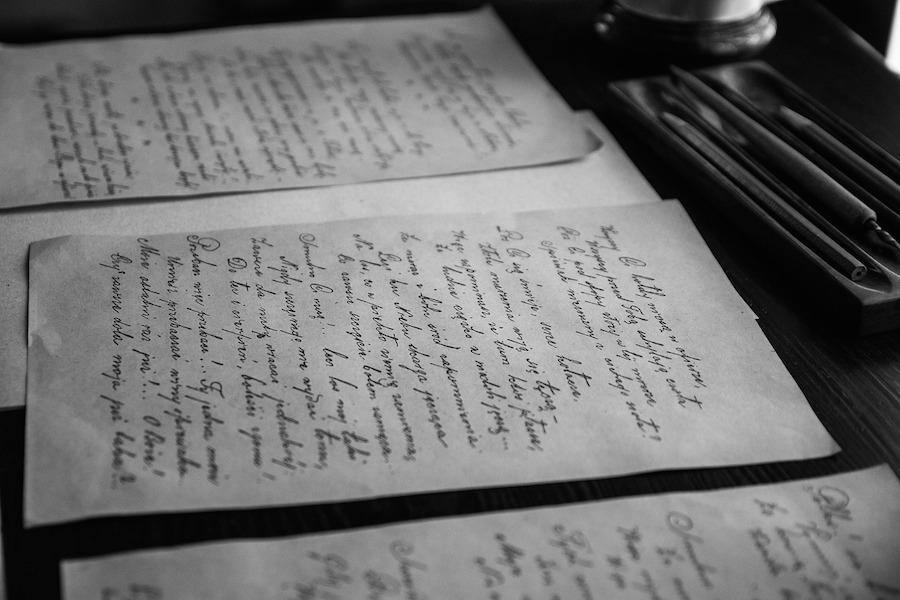 Nobody writes letters anymore. Sometimes the lament strikes me as cranky, romanticized (I once heard a radio interview with a woman who’d decided to homeschool her children in large part because their school had cut out cursive writing). But it’s true that I’ve saved many of the rare handwritten letters I’ve received in my life: notes from friends; the letters my dad sent me during my first months of college, which I read, then, with visceral rushes of homesickness; cards from my grandmother, in a large, looping script so beautiful it almost makes me understand that homeschooler’s impulse. The handwriting is what does it, I think—the shapes of the letters as familiar as the contours of a face. We only write letters from some distance, but they seem to close that distance.

In epistolary-form stories, this sense of intimacy is part of what writers are after. Actual handwriting is of course not in play in a typeset story or novel, but the sense of a written voice is. Fictional letters, when done well (and it is so very hard to do them well), give the reader a wonderful little jolt of recognition—a sense that we’re actually meeting the character who’s written the letter for ourselves, unmediated. In stories that present us with letters from multiple characters, we also get the pleasure of assembling the narrative from these parts, arbitrating amongst these voices. As Ross McMeekin shows in his great review of Ashley Davidson’s epistolary story “A Daring Undertaking,” a story told in letters lets us feel that we’re snooping and then making up our own minds.

These are old literary pleasures. Among the earliest novels in English are some, like Samuel Richardson’s Pamela and Henry Fielding’s wicked sendup, Shamela, written in the form of letters and journals. The Victorians, too, loved epistolary form; the novels The Woman in White and Dracula provide piles of fictional documents and letters and journal entries for the reader to sift through. In these two cases, the trappings of fact are meant to frighten, I think. But the form of these novels makes them powerfully unsettling for a different reason, too: we’re involved. Because the mystery is presented to us only in fragments, we have to go inside and sort things out for ourselves. Once we’re in there, everything is close enough to terrify.

Modern writers also use this form to great effect. In “The First South Central Australian Expedition” and “Eros 7,” Jim Shepard lets his struggling explorers tell us their stories themselves in their diaries. Edith Pearlman’s “Jan Term” and Caitlin Horrocks’s “It Looks Like This” are both moving short stories that take the form, somehow, of school reports. And Alice Munro has proven herself a master here, as on so many fronts; I’ve mentioned the tremendous story “A Wilderness Station” before.

A different Munro story, “Carried Away,” recently got me thinking about the nature of letter-form’s impact on a narrative. Letters make up only part of this story, but Munro makes the intimacy of letter-writing the story’s engine—an intimacy that turns out to be a risky sort of shortcut. Louisa, who’s a librarian in Carstairs, Ontario during World War I, begins receiving letters from a soldier overseas, a stranger to her who remembers her from the library. “Perhaps you will be surprised to hear from a person you don’t know and that doesn’t remember your name,” he writes to her at first. But she writes back, and he feels encouraged, and in the next letter he’s recounting a memory of her coming into the library, one rainy evening, and letting down her hair to shake it dry. More letters, and soon there’s no distance left at all:

I am glad to hear you do not have a sweetheart though I know that is selfish of me. I do not think you and I will ever meet again […] I am not trying to worry you or get your sympathy either but just explain how the idea I won’t ever see Carstairs again makes me think I can say anything I want. I guess it’s like being sick with a fever. So I will say I love you. I think of you up on a stool at the library reaching to put a book away and I come up and put my hands on your waist and lift you down, and you turning around inside my arms as if we agreed about everything.

He doesn’t end up dying in the war, but it turns out there are other obstacles in the way of that beautiful last image (I would feel bad about this spoiler, but this is a Munro story, and there are seventeen other twists after this one). “Carried Away” uses one of the strengths of fictional letters to pull us in—we’re smitten with this letter-writer, right along with Louisa—and then shows us that we’ve fallen for words on paper. The story does a trick, then underscores the fact that it was a trick.

Every letter I’ve ever saved in real life has pulled this trick off. Looking at these letters feels so much like looking at their writers’ faces; it’s easy for me to forget that the letters themselves exist only because the faces were far away.