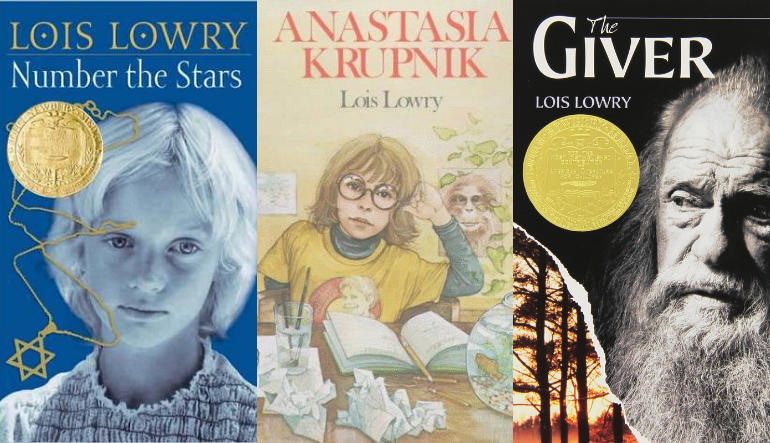 I recently realized that the list of all the things I’ve written (a list that, weirdly for a fiction writer, somehow includes song lyrics, listicles, and sestinas), does not include a fan letter. I’ll Facebook message friends with “Hey, loved the new story!”—but I’ve never emailed a stranger, out of the blue, to tell her what her work means to me.

Since I’m fresh off Thanksgiving, still in my tryptophan coma and flush with gratitude, I figure it’s time to start. Dr. Seuss is dead, and I don’t know who wrote that Little Golden Book about life on the farm. So I’ll start with the one who matters most anyway, my first “favorite writer.” (And, let’s be honest, possibly my last.) Here goes.

I grew up in a town of bankers, with a poet father. Anastasia Krupnik was the only other person I knew with a 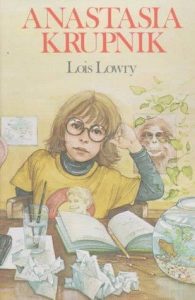 poet father— one who kept his manuscripts in the crisper drawer. I almost told my father about this, but then I realized he’d think this was brilliant and start doing it himself. It was humiliating enough that he didn’t work at Goldman Sachs. The last thing I needed was for some friend to go looking for lettuce and find condiment-splattered sonnets instead.

Of course what I really wanted was to be friends with Anastasia. We’d stand in the doorway of my father’s office, and I’d whisper and point to his hunched figure and say, “Look! He’s going over his galleys! Does your dad swear at galleys too?”

On second thought, this is not a good way to start. It’s all about me, which is not what a fan letter is supposed to be. I’m going to try again.

I learned about Pearl Harbor from Autumn Street. I learned about Sigmund Freud and cheesecloth and converting to Catholicism from the Anastasia books. I read A Summer to Die when I was perhaps a little too young, and to this day when I see someone with a nosebleed I think they’re probably terminal. I was pretty seriously in love with J.P. Tate.  I find Edna St. Vincent Millay’s “God’s World” hilarious for reasons that have nothing to do with poor Edna. I learned the words “homely” and “priceless” from Rabble Starkey.

Wait, is that even true? I’m sure it is, but I’d have to go find the book and reread it and make sure those words are actually in there, or else I’d feel stupid. And the book, I’m sad to learn, is not available at the library where I’m writing this.

This is not going well, so I’ve turned to some friends for help.

It’s not hard to find other writers who feel the same way I do. Rebecca Johns, author of The Countess and Icebergs, has this to say: “The ripple effect of The Giver will last for generations. Lois Lowry practically created the YA dystopia, but the only thing ‘young’ about her story is the character of 12-year-old Jonas. Everything about her world speaks to me as a reader, and I read it first as an adult. Everyone else is just following in her footsteps.”

See? That’s pretty good. I just need to say something like that.

I could still find your shelf in my hometown library blindfolded. As a child I was confused why your books didn’t come out as fast as The Babysitters Club and Sweet Valley Twins, which were (good God, look what you saved me from) my other go-tos. Somehow I lacked the wherewithal to ask the librarians when your next book would be out. So I ran to that shelf twice a week and stared at it expectantly.

This makes me sound like a fairly idiotic child. It’s true that people raised by poets don’t always have the firmest grasp of logistics. Lois Lowry would probably understand this, having invented Myron Krupnik. Still…

I was irrationally jealous of the girl who got to be the model for the cover of Number the Stars.

Seriously? What’s wrong with you?

Here, taking over for sanity’s sake, is Nick White, a talented recent graduate of Ohio State University’s MFA program in fiction: “I read The Giver in middle school, learned about stirrings, cried, wondered how my world was in black and white, and began to understand the power of memory. When I taught 9th grade, my kids were horrified—especially the whole ‘your father just killed a baby!’ scene—and refused to believe he died at the end.”

How hard can this be? Trying again.

When I was in high school and too embarrassed to walk down to the children’s section to check out your books (this was before YA—we were supposed to graduate straight from A. A. Milne to Ulysses), I would sneak the new ones from the kids I babysat. I once made a girl go to bed early so I could finish her copy of The Giver before her parents got home.

No, this is terrible to admit. A true fan would have waltzed past her peers and reemerged from the children’s section with an armload of colorful spines.

You’re mentioned by name in my first novel (as one of the authors a ten-year-old’s strict, fundamentalist mother won’t let him read). When my publisher asked me to make a list of writers to whom I wanted to send early copies of the book, I thought of you. And then I worried that you might not actually enjoy a book in which a character, however villainous and misguided, refers to you as a Satanist. I started envisioning the note my publisher would send: “Ms. Makkai thought you might enjoy this book, in which you’re called a Satanist. All best!”

I’m turning now to Molly Antopol, whose debut collection, The Unamericans, out this coming February, earned her a spot on the National Book Foundation’s  5 Under 35 list:

“For a shy and goofy only child like myself, the Anastasia books meant everything to me. It’s a little embarrassing to admit, but I used to write my way into these books, pretending Anastasia had a sister named Molly who she did everything with. I imagined that I too had a tower bedroom, a younger brother to harass, a pipe-smoking poet father who watched Nova every night. A couple of weeks ago I reread the series, wondering if my niece would be old enough to appreciate them, and I found them just as wonderful as I had as a kid. Anastasia’s so self-deprecating and funny and self-aware, her parents complex and nuanced and lovingly rendered—and who wouldn’t want Gertrude Stein as their next-door neighbor?”

See? It can be done. And so… The final attempt. 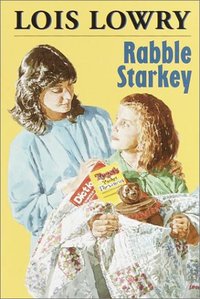 I believe that every lifelong reader has one author who somehow bored a hole into her childhood soul—a hole just large enough to let in all the rest of literature and art and humanity. For me—and I’m one of thousands and thousands, I know—that was you.

For those of us who became writers, that favorite author, that first love, had to be someone so compelling that we didn’t just want to listen; we needed to join you. And I wonder if you know how many of us there are—writers in our thirties or twenties or teens, writers to whom this whole writing thing felt inevitable because we’d grown up half in a house and half in a book—for whom you were that author.

And, more to the point: thank you.