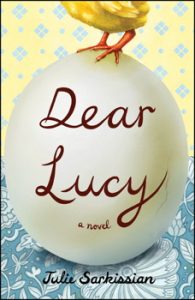 Concerning: Lucy, a young woman whose different way of seeing and behaving has compelled her image-conscious, frustrated mother, Mum mum, to abandon her on a farm.

And: Samantha, a pregnant teenager on the same farm.

And: Missus and Mister, their caretakers. (And later, kidnappers of Samantha’s baby.)

Voices: Lucy, Samantha, Missus.
Voice hiccup: The contemporary quality of Samantha’s voice seems out of joint with Lucy, Missus, and the other characters, who seem to come from an earlier era.

Character garnering the most “yeesh!,” “arg!,” “aaaaaahhh!” and other frustrated and infuriated marginalia:  Missus, whose sympathetic desire to be a mother is combined with a nefarious desire to control and to follow “His plan,” which includes annoying entreaties that eventually persuade Mister to do appalling things.

Minor tick to overcome in the first pages: Lucy’s quirky syntax feels at times Yoda-esque.
For example: “The foxes I can hear them still digging.”
And: “My pockets they are heavy.”

Major strength: arresting sensory experiences through Lucy.
Such as: “I put my hands in and start my looking, feeling for the eggs, and the dirt is soft and alive like a woman’s belly and my insides are the melted sides of a candle dripping over the mountain.”

For all that frustration, fear, and anger whipped up by Missus, Mister, Mum mum, and later, Samantha’s parents, you’re rewarded with: Lucy’s triumph, which includes finally having “the words to say what I want to say.”

And also: the secret of growing.