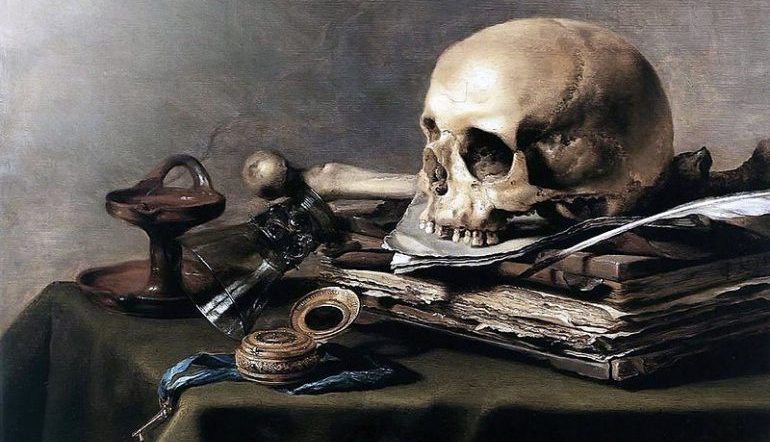 Welcome to our inaugural week of Get Behind the Plough! For each issue of Ploughshares, you can read weekly posts from three authors we’ve published: their thoughts about poetry and prose, art and artifice, life and death. Pretty much anything that gets their creative juices going.

For the next six weeks, we’ll bring you musings from three authors we love from our recent Winter 2009-10 issue. Every Monday, tune in for Peter B. Hyland (kicking things off today!). Alicia Jo Rabins will post on Wednesday, James Arthur on Friday.

Our first guest post from Peter covers extremes in poetry, through the lens of seventeen-century painting. Later this week, Alicia dishes about her city crush, and James remembers his idols. Enjoy these posts, and please continue the discussion at the end by leaving comments. Our guests would love to hear from you.

A jaw-less skull, the rind of a half-peeled lemon resting over the edge of a silver platter, some wilting peonies, a shattered crystal goblet…

When I was in high school, before I actually started writing poetry and all my ideas about artists involved a certain perverted romanticism, if someone had asked me what a poet’s dinner table looked like, I probably would have answered with the description above. This tableaux might come off as overly affected and ornamental, like a scene from a bad biopic about Edgar Allen Poe, but it presents key features of vanitas, a compelling conceit in still-life painting that had its heyday in 17th-century Dutch art.

Vanitas paintings gather up objects that indicate abundance and decay, luxury and waste, to remind you that nothing lasts forever, particularly yourself. Some exude austerity, thumping the death note pretty hard; others luxuriate in a pile-up of earthly bric-a-brac. The word itself, vanitas, means “emptiness” in Latin, and at their most moralistic, the paintings try to spark an awareness of the deficiencies of the material world, urging you to lead a good temperate life and better prepare yourself for what comes after.

What I’m interested in is understanding vanitas as an artistic strategy.

The conceit gains its force through a combination of extremes (items simultaneously flourishing and decomposing), the expression of appetite (through food and place setting), excess (grapes, oysters, and fancy dishware tumbling all over the place) and the suggestion of human presence (the meal that looks as if it were suddenly abandoned). More than once, I’ve come across poems that are so chimerical–poised at the brink of oblivion, vacillating wildly between beauty and terror, steeped in wonder–that they resist classification.

Vanitas, as a creative device, offers an inroad into how some of these poems work. It directs us to reflect not only on mortality, but on transience as a fundamental aspect of the human condition, our position as agents of change as well as bodies subject to change. Vanitas also foregrounds the fact that we are always poised between fecundity and desolation, being and nothingness. I want to take a brief look at a couple poems that represent distinct aesthetics, but which both dabble in this peculiar method.

Frederick Seidel–what do you do with him? Aristocratic, self-deprecating, vulgar, observant, testosterone-driven, and given to feats of gorgeous language, he’s hard to fit neatly into any category. Seidel seems to have a sort of violent wisdom, which will either thrill or disgust you, depending on your disposition. Possibly both. Either way, it’s hard to discount Seidel’s originality and prowess.

One of the things that can most clearly define a Seidel poem, particularly in the last few books, is his use of vanitas. Here are the first two stanzas of “Drinking in the Daytime” from Ooga-Booga:

Anything is better than this

Nursing on a long-stemmed bubble made of crystal.

I’m sucking on the barrel of a crystal pistol

To get a bullet to my brain.

I’m gobbling a breast, drinking myself down the drain.

I’m in such a state of Haut-Brion I can’t resist.

A fist-fucking anus swallowing a fist.

You’re wondering why I talk this way, so daintily!

I’ll tell you after I take a pee.

Oilcoholics love the breast they attack.

Not something you’d read to the kids, but it is darkly charming. Many of the surface elements of vanitas are present: luxury items, death, appetite (here both sexual and gastronomical). But what really revs this up is the tension that’s created by shoving artifice against these things.

Vanitas painters generally rendered their images in an exquisite realism. The brushwork and compositions are ornate, but the artists are also suspicious of ornamentation, which they indicate through their subject matter. Similarly, Seidel is a master craftsman who develops a highly polished lyrical line, a singsong music that might seem whimsical if it weren’t for the coarse content and cynicism. So irony’s at play. Also, the juxtaposition of severe subject, refined style, profane sentiment, and high class give the poem heft. Or to put it another way, the tension between extremes creates momentum. Living it up while “drinking myself down the drain.” Talking “daintily” about “fist-fucking.”

Remarkably, this poem later becomes political, a meditation on the state of a free, well-off civilian in a time of war. Death–far removed in another country but also lodged inside the speaker’s psyche–is coupled with notions of social responsibility. But Seidel never loses his vanitas swagger. In the final stanza, he writes:

I lift my lamp beside the golden door to pee,

And make a vow to make men free, and we will find their WMD.

The extravagance of the language here gets pretty purple (“I lift my lamp beside the golden door”), but is immediately undercut by lewdness and a shift in diction (“to pee”). Seidel also edges in and out of an iambic rhythm throughout the entire poem; in this line it’s fully embraced. The cumulative effect is a generative tension meant to shock the reader into a state of awareness and sensitivity, in the same way a vanitas painter wants to induce speculation on morality and mortality. Also, this is the second time the speaker has “peed” in the poem, so you know he’s been pounding them back. The intoxication is significant, adding another layer of tension–the sloppy drunk with refined wit making stark proclamations.

Let’s turn to another vanitas poet working in a very different vein. Brigit Pegeen Kelly writes intense, surprising poetry. What she gets away with tonally is probably criminal. Who else can write about a decapitated goat or a dog puking up a full-grown man and still sound intimate and approachable, almost comforting? Kelly’s use of the grotesque is clear, but more subtle is the manner in which she generates emotional depth. The well-known title poem from The Orchard has an ending that exhilarates and wrecks you all at once:

Stirred in the orchard. The dog bit

Into the doe’s chest. And the apple

In my hand, against my lips, small,

Misshapen, the size of a child’s fist,

And soft. And it was as if, on that hill,

While the dog fed and the lake lay

Frozen, I was holding in my hand,

Against my lips, not a piece of fruit,

Not a piece of bitter, half-eaten fruit,

But the still warm and almost beating

Heart of some holy being–just lifted

From the dead body. And the heart

Was heavy. And wet. And it smelled

As it would smell forever. Of myrrh.

And burning blood. And gold.

There aren’t many poets who can manage line, sentence, and fragment (let alone the subject matter) with such facility. Again, here appetite is underscored, the dog’s as well as the speaker’s. We even have decaying fruit, which doubles as a “still warm and almost beating heart.” Kelly pulls off a lot (and thank God she does!). She’s sensitive to how conflicting severities can create amplitude: small, misshapen, half-eaten apple/warm, heavy, holy heart; frozen lake/burning blood; hunter/hunted. That last binary gets complicated further, since by the end of the poem the speaker and the dog hold similar positions, each feasting on what has fallen victim, though not the garden-variety victimhood.

The last few lines are in full vanitas mode, blending seemingly contradictory scents and surfaces–myrrh, burning blood, and gold. In Kelly’s poem, and in Seidel’s, there is also a kind of excess, a distending richness, like an erupting cornucopia, played out through everything from occasion to image to lyricism. And this abundance exists side-by-side with an equally prominent bleakness.

Vanitas poses interesting possibilities for contemporary poets. There are myriad examples I’ve neglected (from further back in our literary history), so I’ve obviously explored very little in this post. There are a range of poets who utilize vanitas in fashions wholly separate from Seidel and Kelly, in ways I haven’t considered.

I’d be thrilled if readers turned me on to other vanitas poets or poems. Feel free to contribute your thoughts in the comments section below. I also welcome snappy rejoinders, intelligent grousing, and unrestrained praise. For now, I’ll just go slump down at my table and think on it, as I stare broodingly at the half-burned taper lighting my lavish dinner.

This is Peter‘s first post for Get Behind the Plough.