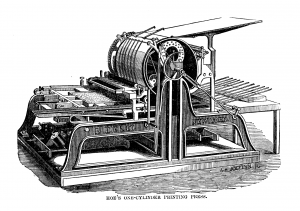 Chapbooks have been around for centuries. Printing equipment changes, and with each development, the availability and use of chapbooks has as well. From the printing press to the mimeograph through to today’s digital capabilities, the chapbook has evolved alongside these technologies.

The Scottish Chapbook Project houses rare 18th and 19th century works in the most popular reading format of the time—the chapbook. The content of these up to 24-page (but always divisible by 4 or 8) little books varied; they were of poetry, politics, prophecies and more. Rutgers’ Harry B. Weiss Chapbook Collection and Indiana University’s Lilly Library Collection also contain work from these centuries with a similar variety in material and wider variety in geographical origin. It’s no surprise then, considering its history, that chapbook presses are emerging on the regular.

Gina Myers’ Philadelphia, a book-length poem, follows a speaker learning to navigate a new city in the fall and winter of 2014. It begins with the line “New city same shit,” introducing what will become the ideological refrain of the chapbook: a return to the question of what liberty entails. There is a cycle in this work’s interiority, beginning with resistance to anything fixed in place: “If I don’t / keep moving / I’ll die.” Within this resistance is resilience: “it’s pretty clear / we’re all fucked / & yet we go on / & continue to fall / in love.” And following the resilience, the speaker circles back to a defeated sort of resistance: “Everyday there / is news of / a new police / brutality / What use / is love / right now?” The short, lyrical lines of this long poem create a tension and a thoughtful pace.

So many of life’s problems, big or small, stem from one’s interpretation of what freedom truly is—Myers’ poem tells readers between the lines. The unspoken political history of her new city coupled with everyday street harassment, the rise of the Black Lives Matter movement in the wake of the protests in Ferguson, and everything in between are what keep the speaker questioning what the “little thin things” that matter are made of, and between them, more largely, what it means to be free.

Third Man Books, like Barrelhouse, has put out full-length collections before, though Ciona Rouse’s VANTABLACK is its first chapbook. The cover tries to do justice to the scientific discovery of a color, known as Vantablack, that absorbs 99.965% of light and is, as Rouse puts it in a short informational section that follows the poems of the chap, “blacker than anything we’ve seen on Earth”; the existence of this color sets the tone for the book.

The poems are concerned with blackness—specifically, black womanhood. In the opening poem, “The Poet Posing Nude,” directives inspire the naked woman whose body is on display (“posing”) to own its absorption of so many other colors, “Be orange and green / and brown, which is purple. Be blue.” There is negation in many of these imperatives as well, such as, “Be not a body” and “Leap from the page / like its song. But / be not song.” This poem sets the tone for the rest of them: there is strength in owning and living within one’s body and its completeness, its wholeness, possessing it as a part of one’s self but not the defining element of that self.

A foreword to this chapbook by Connecticut State Poet Laureate, Dick Allen, makes clear that the poems within will largely handle what it means to be human—from eco-criticism to philosophy to religion to acceptance.

Buddha Vs. Bonobo is divided into two parts: the first, “Knowledge,” from the perspective of bonobos, and the second, “Nirvana,” from a Buddhist perspective. The bonobos of the opening section contemplate human culture and the destruction left in its wake. Human creations like numbers, films, and labor are all taken to task by the primate speakers. There are “no figures here” in “The Genius Bonobos Explain Numbers.” Instead of measuring the “forty-six / frequencies of frog chirps,” “There is no single sound.” Rather than numbering the hours of the day, they “sleep between sun and black.” Bonobo labor is sleeping as well as swinging and “watch[ing] the ancient sun” in “Bonobo Work,” which hints that the comparative repetition of the human need to travel to and from work in pursuit of private property is comparatively useless and wasteful.

The humans in the later section consider their relationship to nature and their religion. The Buddhists see humanity as hungry for the destruction it wreaks upon the earth. The domination of animals and the landscape is critiqued, as well, as in “To Break Our Backs With It,” wherein “the ground bows to us” yet “We inherit time / and our sky is useless.” These humans, who can’t appreciate the awesomeness of observance of celestial bodies, are taken to task by the bonobos of the earlier section whose work is defined in part by the ceremonious rising and setting of the sun. Welsh’s eco-critical poetry takes a clear stance on humanity’s interaction with the earth.