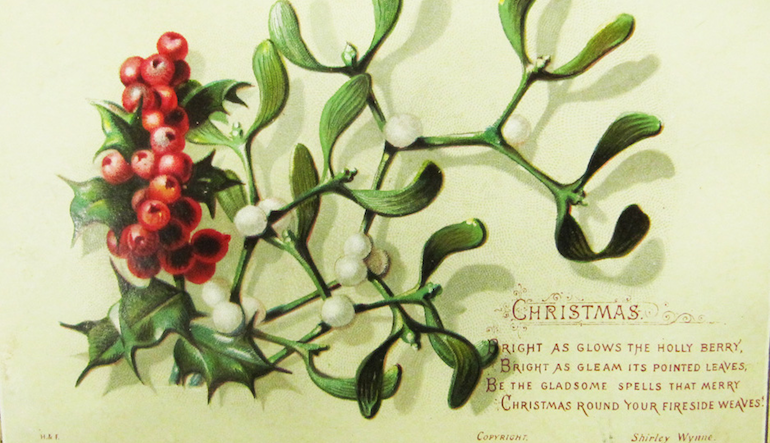 ’Tis the season for decoration. It’s a seductive thing, this ornamenting and transforming of our usual spaces, bestowing on them a temporary beauty. From this seduction whole industries have drawn their lifeblood, and now stuff themselves glossy-paged into our mailboxes, exclamation-point-festooned into our inboxes. (I look forward every year to this holiday takedown of the Williams Sonoma catalog.) Who wouldn’t want to change a space, for a brief season, into something better and more magical than its usual self, so that we can be better and more magical within it?

In literature, scenes of decoration are charged with dramatic potential. In leaving their marks on spaces in this exaggerated way, characters show themselves to us. The central action of the plot in Virginia Woolf’s Mrs. Dalloway is Clarissa’s preparation for and hosting of a party, from the iconic first line on: “Mrs. Dalloway said she would buy the flowers herself.” Clarissa will choose them, buy them, bring them into her home, readying the backdrop in the particular way she sees best. Clarissa’s preoccupation with such matters opens her to charges of shallowness: “…the perfect hostess he called her (she had cried over it in her bedroom), she had the makings of the perfect hostess he said.” The “he” here is Peter, of course, Clarissa’s long-ago love and the voice of many of the criticisms leveled against her in this novel (even when Clarissa levels them against herself, she seems to borrow his voice.) But his judgment is not the novel’s. Flowers here are not a small matter. Here’s the description of what Clarissa finds when she goes to buy them:

And then, opening her eyes, how fresh like frilled linen clean from a laundry laid in wicker trays the roses looked; and dark and prim the red carnations, holding their heads up; and all the sweet peas spreading in their bowls, tinged violet, snow white, pale—as if it were the evening and girls in muslin frocks came out to pick sweet peas and roses after the superb summer’s day, with its almost blue-black sky, its delphiniums, its carnations, its arum lilies was over; and it was the moment between six and seven when every flower—roses, carnations, irises, lilac—glows; white, violet, red, deep orange; every flower seems to burn by itself, softly, purely in the misty beds; and how she loved the grey-white moths spinning in and out, over the cherry pie, over the evening primroses!

In the sheer richness of her language Woolf has had few equals, ever, and here it all is, draped over those flowers. In buying them and bringing them in to serve as party decoration, Clarissa might turn her home “violet,” “snow white,” “red,” “deep orange”; she might fill it with the freshness of “frilled linen.” She might take a particular moment of evening that’s about the savoring of a perfect and finished day, that melancholy, beautiful, lonely “burn” of each flower, into her house, like something caught in amber, for her guests to enjoy. She might in essence stop time itself and give it to them. This is what Peter doesn’t quite see about Clarissa, perhaps—her parties are reflections of her truest self, but that does not make that self small.

Like all moments that reveal character, scenes of literary decoration are charged with the potential for both triumph and disaster. There’s a risk in seeking to change the shape of something—a risk that in Jennifer Egan’s A Visit from the Goon Squad undoes La Doll, publicist extraordinaire, at the height of her fame. Preparing for a party that is the event of the season, flush with her own powers, La Doll oversteps.

And La Doll had had a vision: broad, translucent trays of oil and water suspended beneath small brightly colored spotlights whose heat would make the opposing liquids twist and bubble and swirl. She’d imagined people craning their necks to look up, spell-bound by the shifting liquid shapes. And they did look up. They marveled at the lit trays: La Doll saw them do it from a small booth she’d constructed high up and to one side so she could view the panorama of her achievement. From there, she was the first to notice, as midnight approached, that something was awry with the translucent trays that held the water and oil: they were sagging a little—were they? They were slumping like sacks from their chains and melting, in other words. And then they began to collapse, flop and drape and fall away, sending scalding oil onto the heads of every glamorous person in the country and some other countries too.

La Doll’s vision of those decorative trays of oil spellbinds her the way the flowers spellbind Clarissa: on the space that’s the backdrop for her party, she will bestow an impossible-seeming flourish, a supernatural beauty, something her guests could see nowhere else. She will give them a dazzling sight that’s only possible because it’s temporary. But in chasing this spectacle, La Doll gets too close to that line dividing what’s possible from what isn’t. She thinks too much about images and not enough about practicalities—or rather she assumes she is powerful enough to transcend practicalities. La Doll hasn’t felt fear in so long that she’s slow to recognize it when it finally visits her here: that “sagging” is a warning, but to heed it she’d have to disrupt her New Year’s party before midnight, and she’s paralyzed at the prospect, unable to believe in time that it’s necessary (“they were sagging a little—were they?”). La Doll’s decorations show herself and destroy that self (at least for a while).

And sometimes in the arena of decoration, triumph and disaster occur at once, inseparably. In the tableaux vivants scene in Edith Wharton’s The House of Mirth, women at a party pose in scenes inspired by paintings. They are themselves becoming decorations. And the showstopper, the most decorative of all, is our protagonist, Lily Bart, as seen by her frequent observer in the novel, Selden:

It was as though she had stepped, not out of, but into, Reynolds’s canvas […] Her pale draperies, and the background of foliage against which she stood, served only to relieve the long dryad-like curves that swept upward from her poised foot to her lifted arm. The noble buoyancy of her attitude, its suggestion of soaring grace, revealed the touch of poetry in her beauty that Selden always felt in her presence, yet lost the sense of when he was not with her. Its expression now was so vivid that for the first time he seemed to see before him the real Lily Bart, divested of the trivialities of her little world, and catching for a moment a note of that eternal harmony of which her beauty was a part.

Unquestionably, Lily’s appearance here is a wild success. She seduces Selden and everyone else in the room, with those “long dryad-like curves,” exactly as she intended to. Lily achieves here just what she set out to achieve—yet in the language with which this triumph is described, there’s a threat that will eventually catch up to her. In order to affect her audience as she wishes, she has to “step, not out of, but into” the painting. She has to become a beautiful thing to look at: an artistic display, and a sexual one. She has shaped herself, positioned her own body, with the aim of making it the most pleasing sight for everyone else at this party. The more successful she is in this shaping of self into thing-to-be-seen, the greater the risk that the confines of the display will harden around her, trapping her in place. There’s something unnerving about Selden’s impression that he’s seeing “the real Lily Bart” at exactly the moment that she’s turned herself into a decoration. Selden is wrong, perhaps, mistaking a performance of authenticity for authenticity itself; but there’s also the possibility that Lily’s world has limited her self to that self’s performance.

In decorating we temporarily elevate, and we also reveal our own personal ideas of what elevation means. Decoration, like any outward expression of an inner vision, is an assertion of self—but also of capaciousness, because the whole purpose of decorating is to invite others into the vision we’ve had and tried to impose on the world. The trouble is that we don’t always know ahead of time how that vision will affect them once they meet it.