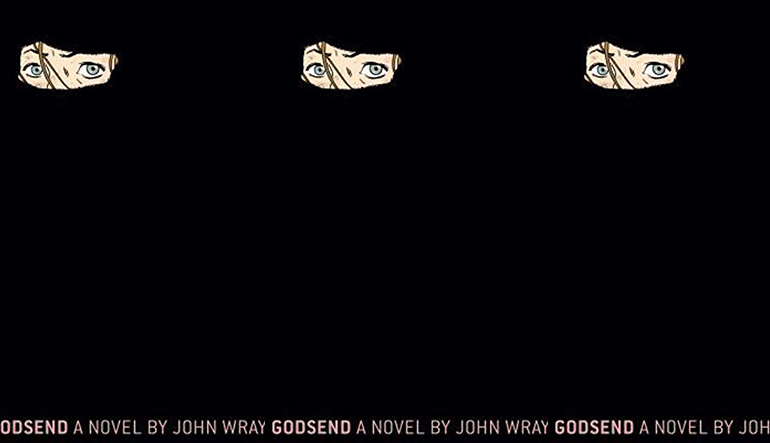 Aden Grace Sawyer, the young white American woman inspired by John Walker Lindh who leads John Wray’s latest novel Godsend, is on a mission from God. The daughter of a professor of Islamic studies, Aden’s introduction to the religion begins in the classroom of the local Bay Area college where her father teaches. She studies the Qur’an and attains fluency in Arabic. Like her father, Aden is drawn to the formal beauty of the religion, but that beauty isn’t what leads her to abandon her family and pose as a young boy at a madrassa on the Pakistan-Afghanistan border. What leads her to this choice, instead, is desire: for God, and for a way out of the limits of her body and her life. “GUIDE US TO THE STRAIGHT PATH / THE PATH OF THOSE ON WHOM / YOUR GRACE ABOUNDS / NOT THOSE UPON WHOM ANGER FALLS / NOR THOSE WHO ARE LOST,” reads a banner on the madrassa where Aden ends up. A girl trapped in the world of men and their reading of the word of God, always within the grasp of American imperialism, Aden moves along the quavering path of her life, guided by the clean narrative of religion.

In Godsend, Aden sets out on a tremulous jihad—a spiritual struggle to shed herself of her body. It’s a disavowal of her girlhood, her Americanness, and the life she knew before. The journey is geographic: she leaves behind California to travel with Decker, a young Pakistani American man whose cousin, Ziar, is able to set them up at a madrassa in Peshawar. America is a corpse to her, something she must bury in order to move forward. Before she leaves, she observes her home as if she’s already left: “The light on the hills was the light she knew best, the embalming golden light of California, and it lay thickly over everything she saw. Already looking out at that landscape was like watching footage of some half-forgotten life.”

But leaving America is not as easy as stepping outside of its borders. The Saudi Arabian airport in which she and Decker spend a layover could just as easily be SFO—it holds “the same shadowlessness, the same array of gaudy shops, the same sterility.” By the time she ends up in a Taliban training camp, her Americanness is acutely apparent, even though she has renamed herself and destroyed her passport as a preemptive and symbolic measure. When news of 9/11 reaches her in Afghanistan, she is less shocked at the attack than at the realization that “in spite of all her subterfuge America had found here…She had gone to the opposite end of the earth, to the void zone on the map, and America had found her.” America sticks to the skin that Aden so desperately wishes to rid herself of, and in running away to Afghanistan she’s traveled even deeper into its trenches of its empire.

Her journey takes her even further from everything she comes to know: Aden sees the limits of girlhood in her quest for god. When a young boy at the Taliban training camp accidentally sees her naked, she tells him that she was castrated. Lying is a sin, but the truth can be so tricky and slight. “He thinks a thing is true if he says it enough,” says Aden of Decker, whose supposed dedication to jihad wilts at his first skirmish. Aden wants to lie her way out of her body and out of being a girl. She twists her story for the boy:

—I come from the other side of the world, she said, in a voice she barely recognized as hers.  —A place where believers are hated. I lost my friends when I came to the faith and my family decided I’d gone insane . . . I tell you this, Abu Intiqam, that you may learn from my example . . . —They cut me, little brother. With a knife.

Aden takes unmarked pills to stop her period, wraps her breast with a bandage, and lowers her voice so she can join the Taliban. The neatest way to god is through the bloody, messy rewriting of her body.

There is clarity in religion; it offers a narrative to the mess of life. But Aden’s religious journey is crooked and confusing, not the “straight path” she was hoping for. Aden’s life is “a smooth line, an unbroken wire, too slender and too dark for her to see,” so she rewrites it, refashioning herself as victim and villain, prophet and sinner, in order to make sense of herself.  “You must take pains to be one thing to them only,” advises Ziar before they arrive in the Taliban training camps. “Your faith alone will give them faith in you.” But Aden’s strangeness is too palpable and unruly—there was no place for her in California, and there’s no place for her in Afghanistan. “In her mind’s eye she saw herself just as she was, as no other living soul saw her, a girl among men, a deceiver, a changeling,” she realizes, that she will only ever be alone, without recognition or community.