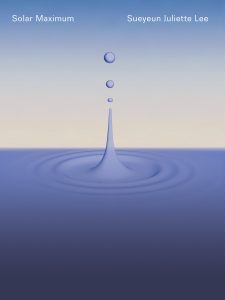 “Perhaps we continue in the wake of a disaster we hardly marked,” runs the last sentence of Sueyeun Juliette Lee’s endnotes for Solar Maximum. Or, the last sentence could be the italicized incomplete fragment: “((when the sun disappears” ending the title poem – an unclosed parenthetical, an opening left open. The closing of this text of “speculative poetics” depends on the reader’s imagination and, as Lee posits, so does our own collective end–as human beings, as life-forms, as residents of an earth always spinning with the potential of being swallowed by the sun.

Most aspects of life require a sort of speculative poetics, an imagining not readily apparent. In order to go about our day-to-day activities, we need to think of what’s not in front of us and what we can’t see in order to progress. Although in this book Lee aims for the literally cosmic, the most maximum, and she does so using small blocks of prose and DNA-like strands of phrase vertically spinning down the page, her scope goes small as well as large. “We spend the afternoon together watching a docudrama about wild horses that roamed the ancient Arctic circle,” begins one section, indicating that the perspective of these poems stays close to individuals looking up at the stretch of stars and through a screen at a dramatized version of earth’s slow melting. The speaker at the beginning of the title poem observes, “I look out the window, wondering that the sky can loom so near.” What’s so frightening about the tone of these poems is their pointing to a degree of helplessness: if a destructive solar blast did occur, would any of us–both scientists and non-scientists alike–be able to do anything except wait to be consumed?

Granted, Solar Maximum is not a polemic, nor a PSA warning. Nor is Lee establishing an apocalypse-porn poetics. The texts written and arranged are abstractly gorgeous, with associations drawn up from all areas. “How did the sun begin?” asks the text. The response:

“the fate of a healthy baby does not depend on
whether it was born naturally
its progress toward the exterior is painfully slow.”

After a time entering into the text, these collected sentiments begin to make sense; but, like exiting a science-fiction film into daylight, you’re inclined to ask yourself after its close, What did I just watch?

Science-fiction doesn’t inhabit a cheap space: again, the poetics of imagining at play in Lee’s text show us that everything begins as fiction, “whether it was born naturally.” And, maybe after looking into it, “Actual observations confirm / this theoretical principle.” But the starting point becomes tricky, an initial notice difficult to pin down. The multiple(x) tones and atmospheres of Solar Maximum make sure that we never get deceived into simply believing one perspective or projection.

Myriad agricultures abound in these pages. There’s a whole section, for instance, that taps into the vocabulary of online gaming. Or take a line that is at once Freudian, detective-scientific, and surreal: “our documents amount to a need for a primary mother.” Then, from the bizarre section “I am a hammerhead shark. I make no sound,” there are the formations:

“First I am blue and then a movement, a future in song remanded to the stomach, a pair of milky eyes that refuse to triangulate, a stereoscopic ocean floor.”

To be blue and a movement in the midst of desire and death mounting in an explosion of light: this is one direction for Solar Maximum.

But another claims that we might be mistaken. The sources of error engage with the proofs directly in the text, arriving at a section in which the reader is made to understand that “The things we read…aren’t / addressed to us at all.” A final question I’m left with, after leaving the Solar Maximum puzzle: Would the sun even address us if it could?